Anwar currently resides on the Gold Coast of Australia but hails from Lakey Peak in Sumbawa, and was over the moon with his victory today saying, "To win this event is so important to me. I'm from Indonesia, and for Rip Curl Asia to put on this event in the Mentawais, in Indonesia, at one of the best rights in the world, and to win it, is a dream come true. Thank you to all the people of Katiet and the Mentawais for letting us come here and surf their beautiful waves. I can't wait to come back next year!”

And when asked about how he felt getting a win over Garut Widiarta in the final he replied, “"Garut is a really good surfer. We've been teammates at Rip Curl for a long time and gone on a lot of trips together. The final just came down to who got the really good waves. I just feel really lucky right now.”

Widiarta, the lightning fast goofyfooter from Kuta Beach in Bali, was very in form all day and certainly deserved his final’s berth.  He bested veteran Pepen Hendrik in Quarterfinal 1, then Oney’s older brother Gazali Hamzah in Semifinal 1 on his way to meet Oney in the 45 minute final, where both he and Anwar got 9 waves apiece. But when the horn blew, a very close score of 16.00 points (out of a possible 20) to 15.50 had Anwar the victor.

Lance’s Right is known to be an extremely challenging wave for a backhand surfer, especially for long barrels rides, but Widiarta was up to the task with several beautiful barrels as well as some incredibly tight vertical backside hacks, scoring the highest single wave score of the day in his semifinal heat, a 9.5 out of a possible 10 points.  When asked if he felt like the underdog in the final being a goofyfooter he replied, “I heard a lot of talk about how it was going to be a disadvantage for the goofies out at Lance's Right, but I felt like it was really good for me as a goofy going backside, especially when the tide gets low, you can really wind up and do some big hacks.”  And about the event as a whole?  ““We've spent the last seven days on the island and every day has just been perfect waves and nothing but fun. Well done to all the surfers, judges, event staff, and especially the locals here at Lance's Right," he said with a big smile.

The Mentawai Pro presented by Rip Curl was the first Premium Grade Asian Surfing Championship event, and the first event of the 2013 tour season, with the top 16 ranked ASC surfers competition against 8 international invitees.  A perfect start to the season in the world’s surfing Mecca of the Mentawai Islands, this event truly set the benchmark for quality waves in exotic locations.  Rip Curl SEA CEO Jeff Anderson had this to say about the event, “We could have chosen different waves to surf in the Mentawais, but given the opportunity to take the best right hander here we did, and with the support of the surfers, the government, and the ASC we are putting Lance’s Right back on the map.  Theses barrels are world class, and it’s a dream wave for any surfer that can ride a barrel, so this has been the best contest I’ve been to in my life…I don’t know how it could get any better than this!”

In addition to all the great surfing action that went down over the last three days out in the water, the Rip Curl crew has also been busy in the village of Katiet with some important Corporate Social Responsibility projects that will have a lasting importance way beyond just putting on a surfing competition.

Rip Curl, in partnership with the Mentawai government, is supporting three separate social development projects in the village of Katiet, on Sipora Island in the Mentawais. The first project is a donation of school supplies and toilets to the Katiet Elementary School. The second is a 30 million IDR donation to A Liquid Future, an NGO in Katiet run by Elizabeth Murray. A Liquid Future provides free English classes for local children, as well as surf and swimming lessons, and art classes.

Finally, Rip Curl is providing technical support and materials, in conjunction with A Liquid Future, to start a ding repair workshop in Katiet, owned and operated by the local villagers. Rip Curl has donated 5 million IDR worth of surfboard repair materials, including resin and fiberglass, and provided training and technical assistance to local villagers. The objective is to develop a sustainable cottage ding repair economy for the locals of Katiet, to repair visiting surfers' broken boards.

Rip Curl would also like to thank the Quest 1, official boat of the Search, for transporting event officials from Padang, Sumatra to Lance's Right, on Sipora island, Mentawais. 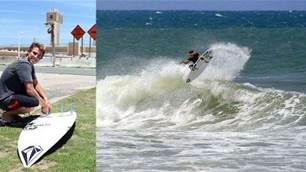