Nathan Myers – author of the offending article – offers his perspective

I believe in peace. More than anything in this life: PEACE.

When surfer Otis Carey took a cultural offense to a word printed in Surfing Life magazine – a word I wrote, in utter ignorance of how it would be misconstrued – I immediately apologized to Otis for the mistake. I felt terrible. What little I know of him, I really like the guy. I respect him a lot.

The tabloids however, enthusiastically raising a stink, I ignored. I accepted their insidious allegations as punishment for my blunder. To enter an argument with them only fuels the fire of bad juju and negativity. Fighting breeds fighting. I have learned to turn the other cheek.

But now Otis Carey is suing Surfing Life magazine (and myself) for AU$200,000 for “defamation of character.” So, legally, this can no longer be ignored.

In case you’re unaware of the backstory here, an article about Otis’ surf trip to America for the film collaboration Se7en Signs described his gruff, hipster demeanor presented in the film Kill the Matador as “ape-ish”. This was intended as a set up an opinion prior to actually meeting him…and later (in the same paragraph actually) finding him to be a sensitive, thoughtful person —the lessons of mistaken first impressions.

In hindsight, it was a horribly mis-used adjective. I was trying to prove how stupid I could be, and wow did I succeed. In my Seppo ignorance, I learned that this is the grave offence to a person of aboriginal descent. Upon learning this, I apologized to Otis immediately. Never would I dream of such offense. I felt awful.

Otis’ response, sadly, is this lawsuit.

The case has yet to go to court. The power of reason remains with Otis Carey. We are still hoping to make peace of this situation.

TRACKS: Do you know the racist history of comparing aboriginals to apes and understand why Otis would take offence?

MYERS: Not at all. But, duh, in hindsight, it was a dumb word to use. Came out all wrong. I’ve always been very interested in my own Native American cultures, and the historic injustices against those peoples make me sick to my stomach. I have a deep regard for indigenous peoples and their connections to the land and their ancestors – a purer way of living that I think most surfers relate to. I’m familiar enough with Australian culture to know they have a history of racism against their native peoples, but my feeling on that is to try not to give it any energy. Hate breeds hate, so if you hate a racist you’re essentially perpetuating a cycle of animosity. It takes two to fight. You can only conquer hatred with love and forgiveness. Forgiveness is powerful stuff.

Still, in light of this situation, I am responsible for my own ignorance, and apologize for it. Humility is important, too.

Have you spoken to him since the article was published?

When I was pointed out how the tabloids were twisting the article into a racist attack by a surf magazine, I immediately reached out to Otis (I live in Indonesia, so I don’t follow Aussie tabloids). I don’t give much stock to what tabloids are saying (one of these journalists contacting me actually apologized to me for having to cover the story, which he recognized as sensationalism), but the idea that I’d offended someone as nice as Otis really bummed me out. The whole point of that article was that I’d initially had this opinion of him (from watching his gritty profile film Kill the Matador) as a dark, brooding hipster type, and when I got to know him a little more I was proven very wrong. He was so removed and silent in Matador, and then so open and poetic in Se7en Signs. It was a parallel metaphor within a larger article about the pitfalls of first impressions. I’d also said they shouldn’t take their “adventure” trip to America (my home), but they’d proven me wrong by filming an interesting portrait of a place I’d formerly viewed with all-too-familiar eyes. There was never any racial connotation to the comment — that came afterwards. When the awkward blunder was pointed out, the magazine also offered a public apology on both our behalves and we all went on with our busy lives. We make mistakes. It’s part of publishing. You have to move on. The first response any of us received from Otis was from his lawyers, who are presently suing myself and Surfing Life magazine for AU$200,000 for “defamation of character.”

TRACKS: Australian surf mags refer to American surfers as Seppos all the time. Harmless or racist?

MYERS: Yeah, I get called seppo by Australians all the time. In print, even. Doesn’t bother me a bit. I always accepted it as The Aussie Way — everyone gives each other a bit of verbal ribbing. Keeps the tall poppies down, right? Like dirty nicknames and stuff. Calling each other Dingo, Porky and Snake...it’s a sign of affection, right? But in recent years, I’ve noticed Australia changing in certain respects. It used to seem the sort of place where if people had a problem with each other, they stepped outside and figured it out. I love that about Australia. No bullshit. People are so real and straightforward about things. They’re down to earth – which seems to be missing in American culture sometimes when everybody is suing each other for scratching their car or swearing in front of their children. It’s so petty and impersonal. But lately – and I mean no offense by this, just an outside observation – Australia seems to be more entangled in red-tape legalities, petty restrictions and people calling their lawyers over minor offenses. I thought Otis was more soulful than this. In fact, I’m still maintaining hope that he is… and all this is just lawyers whispering greedily in his ear — seems like they’re the only ones who will benefit of all this in the end. Maybe he’ll come around and prove us all wrong. He seems like a good person, so I’m surprised by all this aggressive legal action against a poor surf magazine. The world has bigger problems. He could be lending his heritage to fracking and mining issues, rather than surf mag typos.

Some Brazilian surfers claim to be discriminated against as a result of racial stereotyping. Your thoughts on that one?

Ha, sounds like you’re trying to bait me to step in poo again. Yes, I need to tread more carefully. Lesson learned, all right? But come on, let’s not even think that way. People are people. If we aspire to evolve into a world without racism, we need to stop drawing these lines between each other, be it offensive or defensive. When I see people on the internet message boards spewing anonymous hatred and negativity, it just makes me sick. Is this how you want to spend your energy? Wouldn’t you rather go surfing? Wouldn’t you rather be friends with everyone? It really makes me sad… but at the same time to jump in there and start fighting with people about it, well, that’s just more fighting. Best to lead by example and go forth in peace.

But, damn, now I’m being sued so I really don’t have a choice. If it were just me, I wouldn’t worry much. But I have children, so it’s like Otis is suing my kids. Taking food from their mouths. And as a father I have an obligation to put myself between them and this danger. To speak out.

Also, Surfing Life magazine is a fine longstanding institution of surfing heritage, and one poorly chosen, poorly edited word should not be enough to sink the ship. It all just seems wrong, and a terrible precedent to set. I hope surfers will stand up for the magazine. I hope Otis will think about what he’s doing here.

To Otis, I offer a prayer for peace and yet another sincere apology. I really just wanna take my kids surfing and see everybody in the water smiling. Do you really want this costly, negative energy fight? Do you really want to destroy a surf magazine?

Peace breeds peace. Surfing breeds surfing. Forgiveness is the greatest force of nature. The choice is yours.

Footnote: Tracks contacted Otis Carey to discuss the incident but he responded that he was unable to comment. 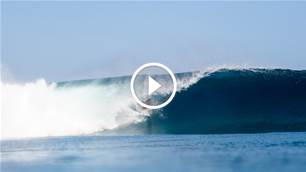 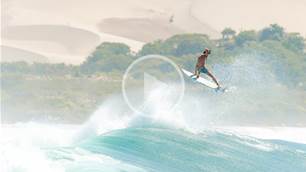 Into the Dreamtime with Griffin Colapinto, Otis Carey, Creed McTaggart and more. 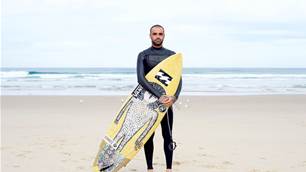