Legendary surfer and shaper Peter McCabe has teamed with up artist Daniel Joyce to raise almost 10 grand for the Sleapy's Foundation charity (https://www.sleapysday.com.au). McCabe hand-shaped a 6’8”, six-channel, pintail.  Joyce then added the signature lightning bolt on the deck and airbrushed the bottom based on an iconic Dick Hoole photo of McCabe slotted at Padang in 1978. Sam Ayton then completed the board with the glassing and finishing. Peter McAbe clutching the Lightning Bolt-sprayed gun he shaped for charity.
McCabe, better known as Grub, was one of the pioneers of surfing in Indonesia. He was the first person to surf Padang and with good friend and sparring partner Gerry Lopez dominated Uluwatu and G-Land throughout the 1970s and 80s. One of the best tube riders of his generation, he had a stunning cameo in the 1988 Quiksilver film All Down The Line. He’s been shaping under his own Tradewinds and Peter McCabe Surfboards labels since the late 1970s, providing generations of travellers with some of the best Indo guns on the market. 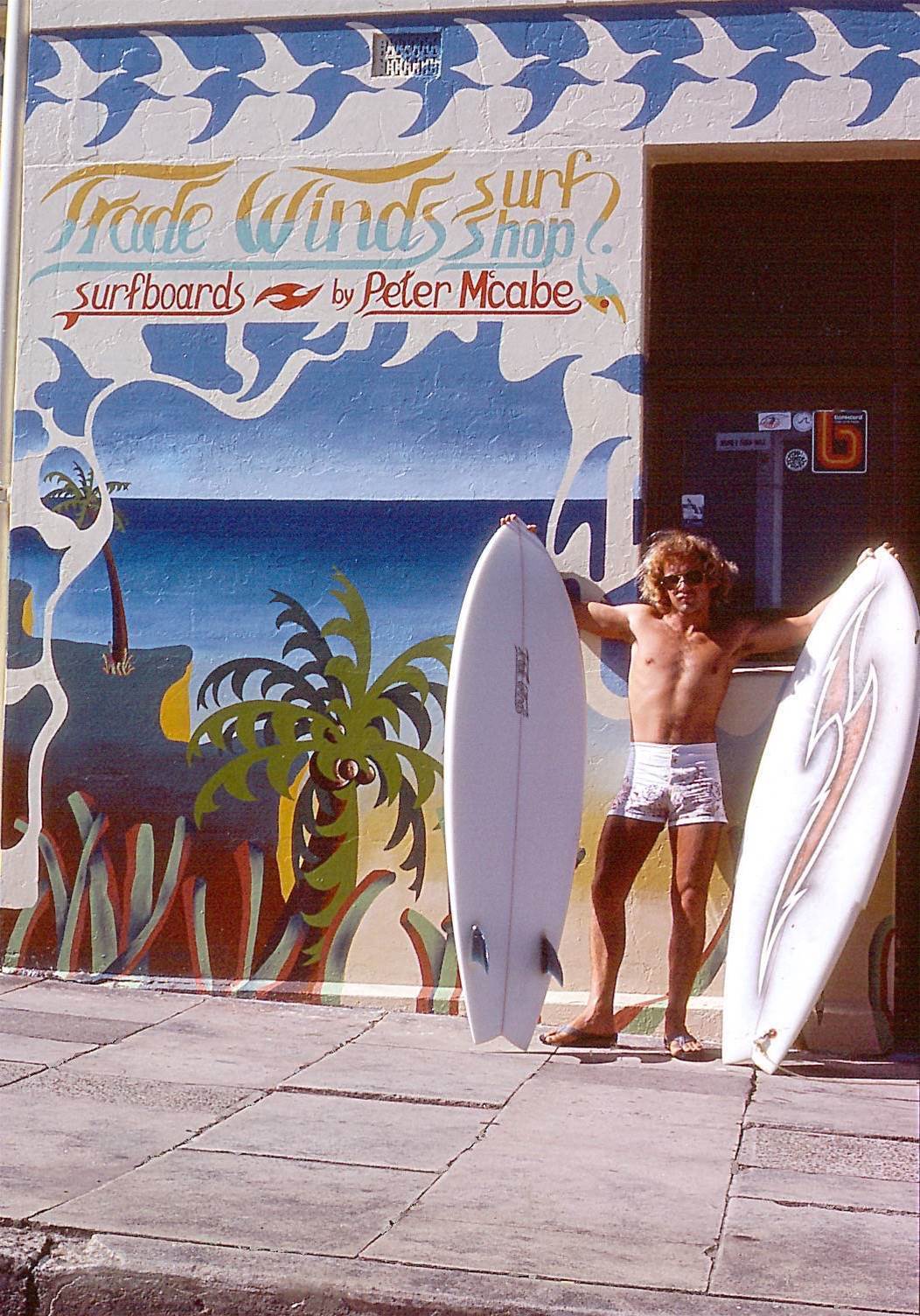 A confident, young Peter McAbe flanked by a couple of his creations.
The board was shaped to raise money for Sleapy's Foundation. That is a charity started by former Newcastle first grade rugby league player Peter Sleap. He has worked tirelessly to raise over $500,000 for those fighting cancer, and their families, since he himself contracted throat cancer almost a decade ago.
The board was auctioned online and sold for $9200 last Saturday. Now McCabe and Joyce have history. In 2017 we covered how McCabe had painstakingly restored a beaten up Col Smith channel board for Kim Burton, the owner of the Toyota dealership which has sponsored Surfest for a decade. After McCabe had brought it back to life, Joyce added his airbrush magic with a spray of the legendary Tracks cartoon character Captain Goodvibes.
Joyce has also donated his art and time to a variety of live charity events held around Surfest each year. When he’s not raising money for charity, drinking coffee, speaking backwards, walking sideways, or fishing, he’s an established artist, painting everything from custom surfboards to large scale murals on planes, hospitals, and trucks. He also recently completed an epic mural at Redhead Beach, not far from his home in Caves Beach.

His and McCabe’s efforts now however have added a significant chunk of surf art and history to the cannon. Costing almost 10 grand and being such a unique piece of work, we doubt this will be going anywhere but on the wall.