Sometimes you have to be a total wave glutton.

It had been a few days of messing around, wasting time and generally procrastinating with life. It was now Wednesday morning, and nothing constructive had been done since the previous Friday lunchtime. Deadlines were looming, bills had to be paid and a shit load of admin had to be dealt with, as are the elements of modern life these days.

The morning was warm, in that humid, throat-crackling dry wind kind of way, and it seemed that a quick surf check was in order. The waves that were pouring through the beach and the point looked excellent, and the summer crowds had thinned to literally nothing. To top it off, the water was still warm enough for boardies in this usually steamer-friendly climate.

It was time for a quick surf. There was a last-minute juggle of mandatory chores and lifts before waxing up the fun board and heading out in my crusty old shortie for an early session.

Last year wasn’t the best year for many, and my negative experience was a drastic lack of surf time along with a famished wave count. Fitness had gone south, while beer drinking had shot north, and every surf had started becoming over-strenuous and challenging, with takeoffs and basic timing often poorly executed, adding to frustrations. This morning felt a little better. There was pressing work to do, as mentioned, but there was little immediate pressure in the water with loads of waves and few takers. It was a fun two-hour session.

Eventually guilt won the battle with wave-induced endorphins and I paddled in and checked the iPhone. There were emails, SMS messages, Facebook messages and Whatsapps pinging all over the place, which were quickly filtered into urgent and not so. A few of them were dealt with in the car park, with the Ford serving as a makeshift office, as it often does. As the mails were going out, so more were coming in. The waves in the background continued to fire. The office was calling, urgently, but the need to surf was just as urgent.

Eventually it was time to make a decision. The phone was turned off, and it was time to head out for another surf, fuck the consequences. There was a wave count to build, and fitness to find.

It was time for the beach break, where perfect shaped right-handers were reeling down the bank with no takers. Generally favoured by the groms, school had eliminated the late morning beachie crowd, and the sets were relentless. After another two hours in the water, the working day was well and truly fucked.

We were chilling in the car park after the second session, when Jordy Smith arrived and paddled out at the beach to get a few of the bombs. He didn't fail to ignite, throwing tail and launching some massive punts for the few of us watching. Jordy showed us why he was ranked number five in the world, and why he should possibly have been ranked more highly at the end of 2018. After 45 minutes his dismantling of the lineup was complete and he was back in the car park with us.

“It’s what I’ve been doing,” said Jordy of his quick session. “I generally surf for about forty-five minutes these days, but don't surf much more than that in one session. It’s a program that works as a fast-twitch muscle workout, and I’m using it in my training program during the off-season.”

Looking lean and fighting-fit, Jordy spoke briefly about his current training routine and his goals for the year, before disappearing down the track. Despite his short-session approach, his surfing served as inspiration to us on the beach as we lazed around in the sun. We decided to hit it one more time. It was surf number three, and the aging dad-bod was starting to groan.

This final session was average. Fatigue had started creeping in, and the swell had lost a little bit of push with the afternoon low tide. Still, it was time to be the ultimate glutton, catch as many waves as possible, and just ride anything that came through. It was a total surfing blowout, and at the end of the day it was satisfying to realise that my brain had allowed me the luxury of not over-thinking life and let me just go surfing, until my angst had dissipated and my wave lust was sated.

Every now and again, if the situation presents itself, you need to glut on whatever is available. That full day of surfing sorted me out, made all the missed sessions disappear into the sands of time, and allowed me to recalibrate as a surfer.

Keeping on-trend, we totally glutted out on celebratory booze that night as well. The beers always taste sweeter when the tang of salt-water is still on your tongue. 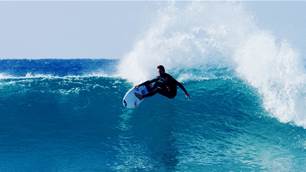