Want something to do tonight? If you live in Sydney, the Sunshine Coast or the Goldy, we’ve got you sorted.

You & Me isn’t just some average surf film. You don’t drift away watching barrels and backside airs with Jack Johnson playing in the background as you might see in John Florence’s film View From a Blue Moon. Instead, you kick your feet up and get lost in the most inspirational, feel good story of the summer – with a little bit of surfing.

Meet David “Barney” Miller, who went from aspiring pro surfer to quadriplegic in the blink of an eye. Unable to move his right arm and both legs after a car accident, Doctors told Barney he wouldn’t be able to walk or breathe on his own again.

Now you’re probably wondering how the hell he got his own surf film.

The car accident did nothing to curb Barney’s surf cravings, so his close friends tossed him a life vest, carried him down onto the sand and towed him out past the break.

“We were all a bit cautious at first,” adds Barney’s close mate Toby in the film. “He kept going bigger and bigger because he knows what he’s capable of.”

We’re talking about a guy that’s now getting pitted at J-Bay on his elbows and grabbing beers with his best mate Mick Fanning. The two have been close friends for over 5 years now and Fanning even dedicated his 2013 world title win to Barney.

“I first met Barney in J-Bay,” explains Fanning with a mischievous grin. “When we first started hanging out… we were pretty wild!”

“I remember one of the first times we hung out we were in this pub and all of a sudden his mates just picked him up and he started crowd surfing in his wheel chair,” adds Mick from the film.

Thanks to Mick, Barney snagged a custom Darren Handley board that complimented his new surfing style, incorporating elbow guards on each side of the board to prevent him from falling.

But for Mick, Barney and Barney’s wife Kate, the adventure was far from over. Years of rehab laid ahead for Barney, who promised his wife he would kneel when he proposed and stand at the altar on their wedding day. Kate stood by his side at every rehab session watching him go from simply flexing a muscle to standing for the first time.

But You & Me isn’t just about snagging a solid right at J-Bay and grabbing a pint with Mick. What you’re watching is a documentary that’s unlike any other surfer profile video, one that dives deep into the lives of two people facing a unique set of challenges. For Barney and Kate, those challenges are tackled by not taking no for an answer. What’s crazy is that Barney and Kate’s journey through adversity might get you more psyched to get out in the water than John John’s film. If the guy can stand up on two feet for the first dance with his wife after being told he would never walk again then no should never be the answer for any of us.

I don’t want to spoil the film – I’m not here to make you cry, that’s Barney and Kate’s job.

You & Me will be playing Monday, May 9, in three locations before the film departs for the United States. Locations, times and addresses are listed below as well as a link to purchase tickets. 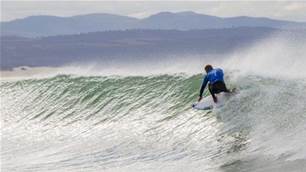 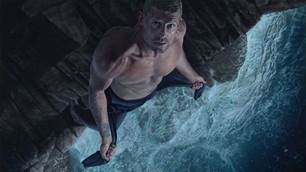 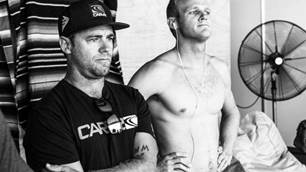