How far has the sport really come?

It’s still by far the boldest move ever pulled by a contest director in the history of professional surfing.

Mid-way through the 1979 Coke Surfabout, arguably the biggest contest of its era, the waves turn a horrible kind of onshore. Contest director, Paul Holmes, has already loaded the world’s best surfers on to the Surfabout bus and gone mobile to Narrabeen and Bondi for the early rounds, but with only a weekend left in the contest window he runs out of worthy options that are a bus ride away.

As Holmes tries to figure out what to do, multiple parties amplify the pressure he’s under. There’s the Channel Nine news team who are producing a TV special on the event and are desperate for good action footage. Then there’s the 11 remaining surfers in the event (including Cheyne Horan, Simon Anderson, Mark Richards, Dane Kealoah, Peter Townend and Larry Blair) who are hungry to get their waxy mits on the $10 000 first prize. And finally the sponsors, Coke, are demanding an even better finish than the previous year’s barrel shoot out between Larry Blair and Wayne Lynch at Nth Steyne.

Instead of cowering in the corner of a wind-blown contest tent, Holmes and his team come up with a radical idea that will redefine the term ‘Surfabout’ and test just how much Coke are willing to tip into the can. Their ambitious plan is launched from the humble setting of Narrabeen car-park and within 24hrs, 11 competitors from the fledgling sport of professional surfing are climbing on board ten chartered Navajo planes en route to Bells where a six-eight foot swell awaits them. The seats are promptly ripped out of one plane to make room for gear and the film crew. Pro surfer and part time radio announcer, Mark Warren, takes to the airwaves and rightfully calls it ‘the biggest Surfari ever mounted in the history of surfing.’

The risk pays off and the contest finishes in flawless Bells conditions with Cheyne Horan defeating Larry Blair in the final. On the flight back to Sydney Horan and Blair play backgammon and wonder if pro surfing will ever get better than this?

Without trying to put too much of a downer on things I think it’s fair to say it hasn’t. So far on this year’s tour, the one highlight in terms of waves has been Western Australia and even then the option to run in cannonball, double barrels at North Point was lost because the WSL hadn’t secured the location as a mobile option. (Apparently it’s definitely in their sites for 2016).

This year we’ve seen the WSL create bigger logos and bigger contest tents. There’s even been some quirky cosmetic changes like the addition of the yellow jersey and of course we now have the effervescent all American gal Chelsea Cannell.

However, despite doing a reasonable job of re-branding and slickening up the gypsy surf tour, the WSL are yet to really present us with one of those ideas that makes you want to jump and fist-pump like you just rode a ten-pointer at Pipe.

Prior to the WSL/ZoSea re-launch of professional surfing in 2014, I had a casual conversation with WSL CEO, Paul Speaker, about where he wanted to take professional surfing. Although talking off the record and from a hypothetical perspective, Speaker made reference to a number of imaginative concepts including the idea of an event that involved putting a large boat in a wave-rich zone so that competitors could be ferried from break-to-break for heats, depending on conditions. At the time it seemed like Speaker wasn’t short on grand ideas and possibly had the guts to try and pull them off. Unfortunately since the WSL officially took control of the sport in 2014, there has been no evidence of this kind of out-of-the-box thinking becoming a reality.

As fans we should perhaps be grateful that the WSL rescued professional surfing at a time when surf industry sponsors were struggling to fund events and the sport was in real danger of floundering (that’s a long and complicated story to tell).

However, as fans we also have a right to hope for a little excitement, imagination and risk. Obviously web-casting events from extreme or mobile locations poses some practical obstacles and going mobile isn’t cheap, but it would be nice to hear that a few innovative concepts/locations are at least being discussed as opposed to selling us Rio’s Barra da Tijuca as a world-class wave.

What about being mobile in the Mentawai islands? Surely this is achievable by using one of the many land-camps in the region as a base. Likewise, anyone who has watched the classic footage of the Quiksilver pros at G-land between 1995 and 1997 knows they were some of the best events in contest history. And what about a contest in Australia that makes use of planes to go mobile? If Paul Holmes could pull it off in the late ‘70s surely it’s possible now.

Nor should the creative planning be restricted to location alternatives. Instead of an expression session wouldn’t it be great to see something with a little more bite like an international teams challenge. There are multiple formats that could be explored but imagine a four man demonstration heat with Mick and Parko up against John John and Freddie Patacchia, or Kelly Slater and Kolohe Andino against Gabriel Medina and Filipe Toledo. Brazilian flag-waving would be taken to a new level.

Alternatively it could be a mixed doubles match up – Mick and Steph Vs John John and Carissa – only the single highest score of each surfer counting to encourage higher risk surfing. Suddenly you have a Davis Cup of surfing that acts as an entertaining sideshow to the title races. I guess if you wanted to avoid parochialism then teams wouldn’t necessarily have to be organised in accordance with nationalities. If a sponsor put up the same prize money available for an expression session the surfers would probably form their own teams and pull together a heat draw.

It’s unrealistic to expect the WSL to execute a multitude of changes at once, however the tour might be a much more exciting place for fans and competitors alike if each calendar year features at least one big announcement relating to an event location or contest concept.

The question is not ‘How good is pro surfing?’ but ‘How good could it be?’ 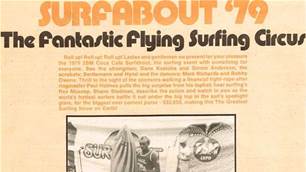