Five things you don’t want to miss when competition resumes at the Quik Pro.

The first heat of Round Two is a doozy. It’s not often you’ll find Mick surfing in round two at Snapper, but after being bested by Rookie Matt Banting in Round one, that’s exactly where he finds himself. It’s not gonna get any easier either, He faces the always unknown quantity of Dane Reynolds. If Dane can find the spark we all long to see it will be a spectacular battle.

Also falling in Round One, Kelly now faces Jack Freestone in heat two of Round Two.  Jack earned his way into the event after winning the trials, and the electric former World Junior Champion is keen to chalk up a win on the big stage. He showed glimpses of what he can do in Round One and will make it tough for Kelly if he’s on form.

Considering the forecasted swell, or lack there of, there has been much debate surrounding the choice of venue when the comp kicks back into gear. Will it be Snapper or will it be D-bah? Are they even allowed to run at D-bah? Tracks has been doing some digging and will present its findings soon. There is a small bump of swell due on Thursday and Friday, but whether it’s enough to fire up Snapper for the mens is anyone’s guess.

The action on the beach

Work be damned, after a string of lay-days you can bet the local surf-fans will be congregating en-masse to create the now famous festival vibe on the beach at Snapper. And if the comp rolls on into round three, meaning Gabs Medina hits the water, the beach will turn from festival to full blown carnival.

Speaking of Carnival on the beach, it’s not just the surfing that will be catching the eye. The sun is shining, the water like champagne and the clothing all but gone. Don't try and tell us you're not having a look.

All photos by Joli 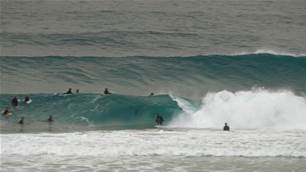 It Appears the Sand at Snapper is Quite Good