The surf documentary of the year.

Andy Irons died eight years ago alone in a Dallas hotel room. He had skipped a contest in Puerto Rico to fly back to Kauai to be with his wife Lyndie. At the time of his death she was pregnant with baby Axel. It’s a tragic story. A son never meets his father, a parent never meets their son. A three-time world champ is extinguished from pro surfing forever.

The much-anticipated documentary ‘Kissed By God’ shines a light on Andy’s bipolar disorder and opioid addiction that spiralled out of control over the course of his professional surfing career. Made by filmmakers Steve and Todd Jones, and produced by Teton Gravity Research it is a truly ambitious film.

By all accounts Andy was the kind of person that would go out of his way to be there for the fans. It was fitting he was dubbed ‘The People’s Champ’. However, as we discover behind the smile he wrestled mental health issues and drug addiction. His inner circle knew, rumours swirled, but it was never openly reported in the surf media until his death. Two articles written by Brad Melekain, for Outside magazine titled, Last Drop and Crashing Down were the only two that dared to go there.

While Melekain’s articles blew the door off Andy’s rise and fall, the booze and drug use, a stonewalling industry and surf media, Kissed By God provides never before heard perspectives from those closest to him who lived through it all.

Bruce Irons immediately sucks you in. He’s candid about their ascent to the top of pro surfing, the trappings of that success and their deeply spirited sibling rivalry. He reveals the extent of their partying and the unravelling of Andy following his first year on Tour. ‘We were manipulative monsters,’ he admits early on. Interviews from Andy’s peers are honest and jarring. From Sunny Garcia, to wife Lyndie, Nathan Fletcher, Kai Garcia, surf coach Dave Riddle and many others.

Bit by bit we begin to piece together Andy’s life in the fast lane. His three consecutive world titles, the anxiety that came with success, the manic episodes, depression and drug use. As Andy soared many leeched off his stardom or became enablers for his vices. It’s all laid out in the film and agonising to watch knowing that it doesn’t end well.

At the height of his career Andy was unstoppable. Footage taken from Jack McCoy’s seminal biopic Blue Horizon is a welcomed sight and only adds to the magnitude of the Kelly vs Andy rivalry.

Not all questions are answered in the film. There is no finger pointing when it comes to who was responsible for his wellbeing or the duty of care of Andy’s sponsors, the ASP or his peers. No doubt those people knew Andy had issues but they remained silent, kept it a private matter. Whether that was the right or wrong thing to do depends who you ask.

Ultimately, we witness a man tormented by mental health issues which he chose to self-medicate and will away. A man who experienced dizzying success and absolute loneliness. Many of Andy’s peers kicked their own drug addiction following his death.

The sadness of Andy’s story in ‘Kissed By God’ stuck with me for days afterward. His legacy as one of the greatest surfers to ever live still holds true despite his faults. And while it’s unlikely we’ll see another story like Andy’s they still exist in coastal towns around the world. If art can bring about social change than hopefully this film has the power to start a conversation for surfers struggling with their own mental health or drug addictions. When it hits cinemas, go and see the film. 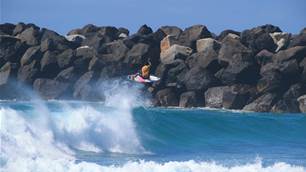 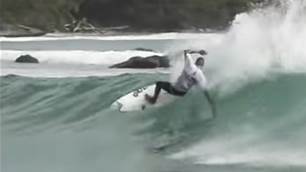