What really went down between those neatly edited Taylor Steele sections?

After the release of Momentum in 1992 Taylor’s Steele’s full throttle, punk-rock-powered, VHS films became mandatory viewing for all surfers. In a time before the Internet ruled, it was Steele who put the likes of Kelly Slater, Rob Machado, Shane Dorian and Taylor Knox in our lounge rooms and ultimately changed the way an entire generation tried to surf. Three to the beach was out – finners, airs and tail-slides were in. Each film was like an un-official free surfing contest and grommets would spend hours debating who had the best sections in ‘Momentum’, ‘Focus’, ‘Goodtimes’, ‘The Show’ and ‘Loose Change’.  If Taylor gave you the coveted last part it was his way of saying he thought you’d won the battle.

Relying on extensive interviews with the surfers and exhaustingly researched archival footage, the recently released ‘Momentum Generation’ documentary, endeavours to revisit those heady days and look at the forces shaping the key individuals involved. While there were many bit players in Steele’s films, the documentary focuses on the connection between Kelly Slater, Rob Machado, Ross Williams, Kalani Robb, Shane Dorian, Benji Weatherley, Pat O’Connell, Taylor Knox, Todd Chesser and of course Taylor Steele.

The Directors (Jeff and Michael Zimbalist) might have just turned up the volume on Pennnywise and got the surfers talking about the goofy skits they made in the later movies, but in a doco that lists Robert Redford as an executive producer, as you might expect, things get pretty deep.

The first thing we learn is that most of the momentum babies came from dis-functional families. It almost implies that the worse you had it, the better you surfed. Slater is of course the classic psychological case study of the over-achieving child of a broken home. As we watch a montage of footage a young Kelly, he fills us in on the childhood traumas, which obviously played a part in moulding him into one of the most competitive beings on the planet.

In any case it was one of those broken homes that created the genesis for the Momentum crew to become a reality.

The group’s court-jester, Benji Weatherley, explains that when his Mum bailed on his dad she decided that the North Shore of Oahu would be a great place to lob. (Does that always happen on the Nth Shore, cue John John’s Mum)

Thanks to Benji’s open-minded mum, their home soon became an ever-expanding half-way house for every aspiring, young pro-surfer from main-land USA and Hawaii. My what a fun time and place it must have been for a keen young competitor.

Via the interviews we come to understand how Benji’s crib cultivated the perfect alchemy of ruthless competition, camaraderie and fun for producing groundbreaking surfing. Amidst the daily mayhem there was one common goal – conquering Pipe. The film explains how the core group propelled one another to go from scared kids to Pipe aficionados who regularly scored the bombs on good days. It’s a vibe, which team houses still try to replicate on the Nth Shore today but, as the film makes apparent, the variables at play in the organic evolution of the Momentum crew are tough to replicate.

Perhaps the unexpected hero-figure in the documentary is the late Todd Chesser. In interviews each of the surfers paint a picture of Chesser as someone who possessed a potent mix of raw machismo, charm and principles. It was Chesser who dragged them over the ledge on waves they would never have entertained on their own and Chesser who ultimately brought them back into line when the trappings of surf stardom threatened to make their egos run wild.

Meanwhile it was left to a young Taylor Steele to infiltrate the ranks of this uniquely entwined group and document the way they were revolutionising surfing. Taylor may be a big deal these days but aspiring film makers will take solace in hearing he was once just a kid hawking his VHS tapes of Slater and co’ out of a car, trying to get his film-making career off the ground.

As the archival footage flashes back to the Gooodtimes Road Tours, which combined movie showings with live gigs, it’s suggested that Taylor’s films helped propel not only the surfers, but some of the bands (including Pennywise, Blink-182 and Sprung Monkey) they are synonymous with as well.

While illustrating the unique connection, which existed between the Momentum crew, the film doesn’t dodge the fact that the bonds were at times made tenuous by virtue of the fact they were also trying to destroy each other in competition. The infamous Machado/Slater high-five incident at Pipe is reviewed in great detail with Occy, Pottz and Sunny Garcia chiming in to ensure we get the complete hindsight picture. The darker aspects of the Slater Vs Machado rivalry are also teased out, as are the less well-documented rifts, which existed between other members. Did Ross Williams really punch Shane Dorian’s board before they surfed a heat?

There are also plenty of lighter moments as the surfers reflect on some of their jack-ass style antics and, somewhat randomly, Pat O’connell’s penchant for pulling his balls out whenever he got the chance.

Ultimately, ‘The Momentum Generation’ gives you permission to rediscover a simpler time, when your pre-surf psych-up was a favourite section form a Taylor Steele vid’ and you had the punk rock tracks running through your head on every wave you rode. However, the film ushers you back into this world in a way, which puts an entirely different perspective on your memories of the era. Back then they were just bullet-proof surf stars that we were all trying to emulate. In ‘Momentum Generation’ they become a little more human, with psychological scars, character flaws and personal challenges to overcome just like the rest of us. Maybe we end up liking them even more. 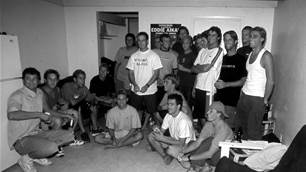 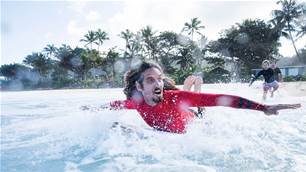 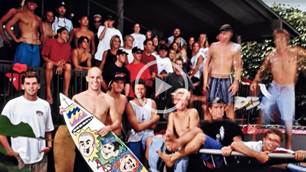