Did the aerial focus in the Quik Pro go too far?

The final few heats of the Quiksilver Pro were unattractive to me, and a case in point of the type of surfing that I do not enjoy watching whatsoever. While not symptomatic of a fault line with the WSL and definitely not with the athletes, it was my own viewpoint, and there was something bugging me throughout my view time.

A few years ago I sat with Matt Biolos in the freshly built WSL tower of song at Snapper, and we watched an afternoon of surfing together. The waves were good and they were reeling from behind the rock right up to the tower, at the edge of Little Marley and the surfing was insane. There was some wild surfing that day, and some crazy scores coming off huge moves. A few years ago and some of the airs that we now consider ho-hum, were actually on the edge of performance abilities, and we were getting shocked by some of Medina’s outrageous turns amongst others.

“Where does it end?” I asked Matt rhetorically. He took the bait. “It doesn't end,” he said flatly. “It just resets itself.”

That was the pearl of wisdom that was bugging me throughout the finals day at shitty, disappointing Duranbah. The WSL has been admonished enough about their decision for not running on Saturday, so I’m not going to climb back in there, but it was a terrible day’s surfing.

Our champion, our Italian Ferrari, was pushing his surfing to new limits in the small onshore conditions, and it was fugly to watch. Awesomeness for an airshow, but for a final of a CT event it was an abject disappointment. Pump and bounce down the line in a desperate attempt to milk speed, disregarding any aspect of style or flow, in order to jump into the air as high as you can and spin around while in the air. To make it one more step towards hideousness he starting shuving it, spinning his board underneath his feet like Zoltan Tarkos, the notorious ‘surfing magician.’

or like the heroic Laurie Hamshere (check the claim)

You enjoy that shit? Mmm.

The point being, through no fault of the surfers or of the industry, it seems we’re now worshiping ‘the trick,’ and the WSL judges have started edging themselves into a corner.

In all fairness, what do you do on a small onshore day like the finals day? The surfers can’t generate enough speed for big power moves, and there is only a certain amount of water available for displacement when the waves are two foot and weak, so there ain’t no buckets of spray being tossed around. The only way to win heats and get points is by going to the air.

If you could possibly combine it with some speed and flow, like Jordy did in the semifinal and like Kolohe did in the final, it wasn't being bought by the judges, and instead the shuv-its and those unsightly tail-sliding backhand 360 tricks were on the winning side of the draw.

There was a time when surfers realized that shorter boards were better, and cut their boards in half. There was a time when two fins were deemed better than one, and single fins were eliminated for good. There was a time when three fins were better then two, and a similar revolution happened. Boards went thinner and thinner, with more and more rocker, until surfers stopped and realized that the surfing they were witnessing was unattractive, and started beefing up and flattening their boards again. Similarly when everyone went onto the first round of quads in the 80’s, there was some dreadful surfing going down, and everyone eventually went back onto the basic thrusters for a while.

Tow surfing took over big wave surfing for a while, until surfers took stock and said collectively, ‘this is shit,’ and went back to the paddle. There was even a time that your basic sliding 360, backhand or forehand, were considered high risk and high scoring moves, until everyone realized what a laughable move it actually was, and booted it out of the high performance criteria.

Things change, perspectives shift, and I’d like to think that the most important marker for good surfing is that it appeals to the eye.

Clean lines, power turns, speed and style always look great and if a surfer has these elements in their surfing, they should be appreciated, by judges and spectators alike. 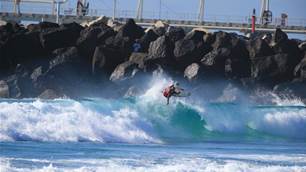 Ferreira Frenzy: Italo Wins it All