The best surfer in the world opens up after his defeat at Bells.

“I should have taken my prize money and put it into a bet on four heats for underdogs I would have made more than the winner maybe,” laughed Slater after his loss to Michel Bourez that on a day that saw he, Joel, John John and Medina fall to four unlikely heroes.

Many argue that Kelly continues to labour under the false illusion that he can compete for major championship victories. Others have attributed his dwindling success to his business ventures that have caused more headlines in recent years. Meanwhile Kelly himself acknowledges that unless the waves are firing he lacks the same motivation and drive in years gone by.

“I hate losing heats … but I used to really thrive on the challenges and was excited every morning to wake up and have that challenge and it would push me all the time and I’d obsessively think about it in when I was freesurfing and stuff, but I don’t feel that way now,” he said with a certain resignation. “I really look forward to those heats when the waves are good and there are a lot of waves to ride so you don’t feel the pressure of competition, you’re just surfing. I don’t know. I’ve been having a few losses and not living up to what your own expectations are – it kind of wears on you.”

“To be honest I haven’t really been in the position to stare down a world title in a couple of years so I’m going to have to adjust something, either my focus or intensity to get myself back. I don’t really feel like I’m in the mix at the moment,” he said.

So at 44-years old, 11 world titles and 54 CT victories, is this the end of the road for the most successful surfer in the history of the sport?

[Pause]. “I don’t know I’ve been thinking about that for fifteen years. [Laughs]. Even my mum texted me and said, ‘maybe you should think about it?’ But then she’s said that before and I came back and won the world title. I think anything is possible.”

“There hasn’t been anyone on the tour before at my age and it’s really easy for people to accept that it could be the time or adversary can’t be overcome at this age. It really comes down to freeing your mind up and keeping your body healthy and having goals and desire. So for me personally I’m kind of in a long-term slump right now.”

“There are a lot of other sportsmen that I wouldn’t be surprised with if they came back and were able to dominate for certain periods of time that maybe aren’t doing well right now. I haven’t had those results and I don’t expect to get last place at the first one [event] and close to last place here but it can happen.”

Slater agrees that right now the tour is as open a playing field as it has ever been. “After what we saw on the Gold Coast and this contest anyone can beat you.” Rookies and injury wildcards are knocking out world champions. At 18-years old, the youngest surfer on tour is American, Kanoa Igarashi; Slater had already earned four-world titles by the time he was born. He acknowledges that the hungry rookies and the underdogs have learnt the psychological value of their position.

“Heats happen on paper and you think there’s a favourite but the guys who have nothing to lose I think have realised that more and more and they surf from a dominant place and the favourites surf a little safer or try to defend their win and aren’t offensive.” 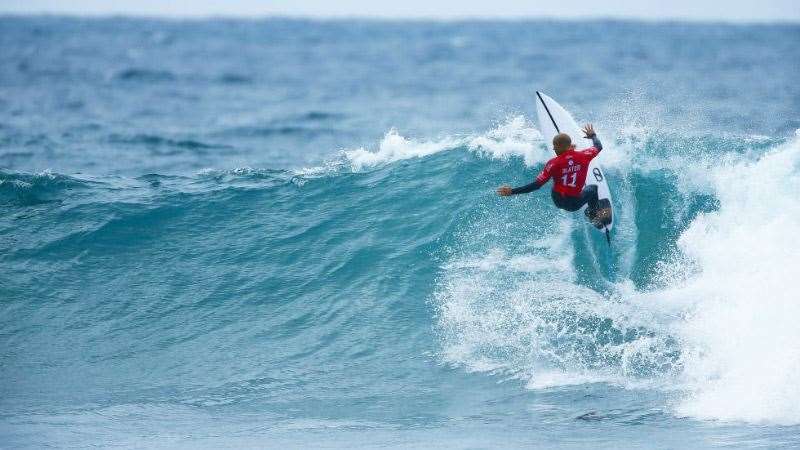 Kelly draws up into the lip on a Simon Anderson design in round three. Photo: WSL/Sloane

Kelly draws similarities between his competitive hardships and those of golfer, Tiger Woods. The American golfer has been wrestling with the reality of an ongoing form slump that have led commentators to label him “delusional” and a “middle of the pack hack”.

“Tiger was so dominant for so long and it was never a surprise if he had a little set back you were like, ‘cool he’s human’,” said Slater. “I look at someone like him who’s struggling with some physical problems with his body and some mental baggage being the most scrutinised guy in sport for about ten years. You either thrive on or feel that pressure and I think he’s just in a place where he’s in that position and I can relate to that myself. I really thrived under pressure for a lot of years and now I’m not enjoying it as much and I think a lot of that I put on myself.”

“There a couple of years where I hadn’t had a win in the early 2000s but now it’s become a little bit of a monkey on my back to be honest. I don’t think that’s any kind of a secret … I just haven’t had the results I expect out of myself.”

The Firewire acquisition, Slater Designs surfboard range, his wavepool, and new clothing label Outerknown have been major distractions for Kelly outside an 11-event tour year. However he refuses to admit that they have been the sole reason for bringing his competitive career to the crossroads.

“You know I have had some distractions and pressures in my life but I’m not going to go blame those. I’m going to go out and still put everything I can out into every heat. For me I feel like I haven’t surfed as freely in my mind in heats. When you’re really surfing well and competing well you make really easy decisions and you don’t think about them or question them. I haven’t been doing that. I need to go find that place again.”

Kelly’s final word on current world number one, Matt Wilkinson, and the draw at Bells were perhaps the most telling in regards to where his competitive mindset is at. Instead of engaging in his trademark psychological warfare he’s giving the young guys pointers.

“Everyone who got fifth or better at the first contest is out now except for Wilko,” said Slater. “I told Wilko, you win a couple more heats, you put a lot of daylight between you and number two. It would be pretty insane to see Wilko pull off another win and be at 20 000 points and nobody else even at 7000 points. It’s an interesting situation for him and a new place for him to feel out the competition.”

The surfing world loves to wonder, “What will Kelly do next?” If he left the tour, pro surfing would feel a great loss, but no one (including Kelly) wants to see him going down in sub-par conditions in rounds one and three. The analogy of the champion boxer who fights one too many bouts starts to become relevant. There are two more contests before a leg that includes, Fiji, J-Bay and Teahupoo. For now they loom in the distance like a promised land for a weary traveller who has a couple more obstacles to overcome before he reaches his destination. When one WSL insider asked him if he was excited about the possibility of surfing North Point in WA Kelly was quick to dismiss this as something to get his hopes up about. “Hype it up man, hype it up. We’re going to go to Margarets and surf twenty more years before we get to surf North Point. It’s just not going to happen. I love the idea that it’s on the possible stages to be run there but I actually think it would be nice if they look at running it there even if it’s four-feet because there will be some airs and little barrels.”

Meanwhile the Box offers a glimmer of hope for Kelly. “The Box is a super good possibility. I think we saw a lot of people get their feathers ruffled a little bit there last year, which I think for surf fans is a good thing. You know what to expect at the Box. It’s a three-second long ride and it’s intense. The wipeout we saw Melling have, the barrel we saw Owen get, some of the positions guys were put in because they were out of their comfort zone I think was a healthy thing for us.”