Nobody is safe on the new look WSL.

Nobody saw it coming, but on an unassuming, onshore Monday morning at Bells it took just four heats to radically redefine pro surfing.

It was Connor Coffin who sparked the rookie revolt. The Rincon kid with the wide-winged, caramel carves and the full throttle lip attack has become the new favourite surfer for thousands of WSL fans. There’s lashings of Curren and a twist of Reynolds in his style and of course he has Brad Gerlach in his corner to give the whole thing a sense of theatre. It really came down to a single turn for Coffin. Chasing down an in form Parko, Coffin heaved through a layback snap that was heavy on the commitment without sacrificing panache. He later told the press that it’s his favourite emergency situation move. “When shit hits the fan I just do a layback… I feel like it’s really good to have something… Gabriel and Filipe if they need a big score they can do a big air and they know they have that in their back pocket and they can drop an eight with one manoeuvre … it would be good to have an air like that but for me that’s one turn that I know I can pull off with pretty good consistency. They seem to get rewarded and they’re fun as shit to do.”

While many of the surfers have more clichéd coach types issuing advice, Connor has charismatic former world number two, Brad Gerlach, tossing him pearls of wisdom. “It’s great to have Gerr here he’s super fun to hang with. It’s nice just bouncing boards off him and these conditions are tricky and I kind of like clean waves for carving. Sometimes I get a little bit anxious and Gerr just reels me in. Sometimes it’s nice to have someone to say ‘You have one of the top guys but don’t just freak out.’”

In Connor Coffin, Joel Parkinson now has a rival for the claim of most stylish surfer on tour. However, when quizzed about the style war with Parko he was more interested in paying homage. “I don’t know about that. Joel’s got an insane style. He’s smooth and polished. A lot of the things he does I really admire. Just clean smooth surfing.” Interestingly as Coffin played down his style status Parko walked past and patted him on the shoulder and stated loudly, “ Well done. Now go on with it!” 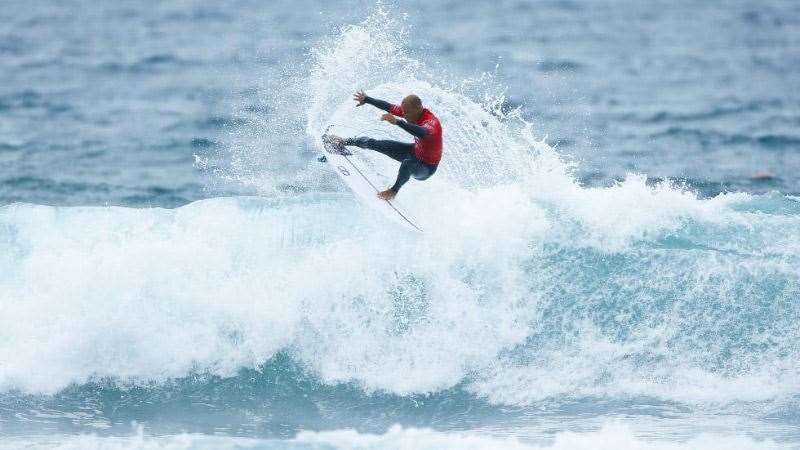 Kelly frees the fins over a Bells wall but is cut down by Michel Bourez in round three. Photo: WSL/Sloane

Simon Anderson had just seen Parko defeated and was watching Kelly Slater paddle out on one of his boards when he perhaps put the mockers on the guy riding his design.“It’s starting to feel like the older guys can get picked off now,” he stated with typical honesty.”

To Simon’s credit Kelly’s board looked better than any he’d ridden this year in heats. Kelly was crisp off the top and less catchy but again it was the layback that became the move that mattered. Kelly couldn’t hold on to his early attempt, while Bourez’s brutal incarnation of the drop wallet combined with controlled tail-slides was enough to set up a solid win. Having just forced the best surfer ever to frankly contemplate his future, Bourez was off to the airport to pick up his family, but not before explaining why he’s dangerous at bumpy Bells.

“It’s the conditions that I like the most. Stormy conditions. Everyone is pretty much struggling and it’s where I feel the best. … when it’s like that not everyone will have their A game so it’s good for me.”

Meanwhile Simon gave a typically dry appraisal of how Kelly performed on his board. “Well at least he got one good wave.”

It took Kelly a long time to emerge from his cave after the loss but as usual he astutely summarized what was taking place as the big names continued to topple.

“Heats happen on paper and you think there’s a favourite but the guys who have nothing to lose I think have realised that more and more and they surf from a dominant place and the favourites surf a little safer or try to defend their win and aren’t offensive.”

That’s exactly what transpired for the remaining two heats of round six.

John John looked comfortable against Caio Ibelli. He too was using the layback-slash to great effect, elegantly bending his rubbery frame through closeout snowballs. Meanwhile Ibelli was swapping boards and falling on finishing turns.

However there was no hiccups on his last free fall floater which, as one staunch Victorian observer explained, “He claimed the shit out of!” The judges deliberated for a long time over the score, no doubt feeling the pressure of a decision that would eliminate pro surfing’s most brilliant exponent. In the end they gave it to the unassuming Ibelli by 0.04 of a point. Irrespective of how much you love John John or what you thought about the score it was undeniably a decision that blasted the WSL door even wider open. Once there was a perception that you had to demolish more highly ranked or favoured competitors to get through but now it seems like every heat is starting with a clean slate and nothing but a plethora of possibilities. That definitely makes the sport more exciting.

Post-heat, Ibelli’s comments reflected Kelly’s earlier suggestion that there’s an advantage to being the underdog with nothing to lose. “I knew John John would get good scores and I knew I would have to surf really hard on the right waves. I feel like here you have to go all out. Everyone’s so good and they all have way more experience than me. It’s my first time here in Bells Beach.”

Asked whether it was the biggest win of his career Caio shrugged and set his sites on bigger glories. Like most of the rookies he lacks nothing in the way of confidence. “Yeah, I guess. But I want to go to the final and then it will be a big win.”

Davey Cathels was singing a similarly self-assured, nothing to lose tune after he continued the rookie raid against Gabriel Medina. “You kind of have to look at it as an opportunity to take down one of those big guys… I kind of have belief in myself and feel like I’ve ben surfing pretty good out here the last few days and I saw Caio before me and Stuey on the Gold Coast taking down big names and I’m like, ‘I want to do that too’… That was a massive heat but I knew I could do it. I just had a game plan and stuck to it, tried to sell him on some bad waves ….”

Cathels also had a theory on why three rookies had managed to savagely eliminate more highly ranked surfers on a day that left much royal blood spilled in the water at Bells.

“I think this new crop of rookies, we’ve been battling it out on the WQS for so long, I think we’re a bit more hardened than previous years­ – we don’t want to be back on that QS so we’re here and we’re trying to give it our best shot.”

Irrespective of what happens for the remainder of the event one morning of surfing has changed the competitive landscape. No surfer, no matter how highly they are ranked, will paddle out feeling comfortable in a heat for the rest of the year. Welcome to the brave new world of the WSL where nobody is safe.