Kelly gets KO’d but still wins. Jordy roars, but the Ozi Jacks play the best hand.

It coughed and it spluttered after it caught COVID but this morning the Pipe Masters roared back to life. “We want to thank the state of Hawaii and the local community,” stated Kaipo Guerrero from the booth. The show had to go on but there had definitely been some hard-core hustling to pull it off. The WSL had been behind the foam ball with one foot on the board for days, but somehow they’d made it out of the COVID closeout.

It was wind-ruffled and shifty Pipe with multiple swells colliding in the line-up, but there were gems out there and it was big and chunky enough to make it challenging – it was certainly more entertaining than having a COVID testing kit jammed up your nose.

The dismissal of Adriano De Souza and Conner Coffin in the elimination round provided the morning’s first major drama. The former world champ didn’t post a meaningful score while Connor Coffin was the worst performer in a dismally low scoring affair. No pro surfer will ever be happy with a heat when they fail to post a score higher than a two.

Toledo was the next big name to topple, his Pipe shortcomings exposed by the perpetually frenetic Leo Fioravanti in the first heat of the round of 32.

Griffin Colapinto may have one of the best, Backdoor highlight reels this season, but he found out the hard way that Instagram likes and backslaps mean nothing once the singlet goes on. Peterson Crisanto was heroic as he burrowed at Backdoor and hurled himself over the ledge on one of the biggest drops of the day on the lefts. Pipe bucked Peterson off after he did the hard work, but he’d already surfed well enough to dispatch Griff and the Grinch to the Billabong house where they could scroll through his freesurfing clips and pretend he’d been wearing a singlet. 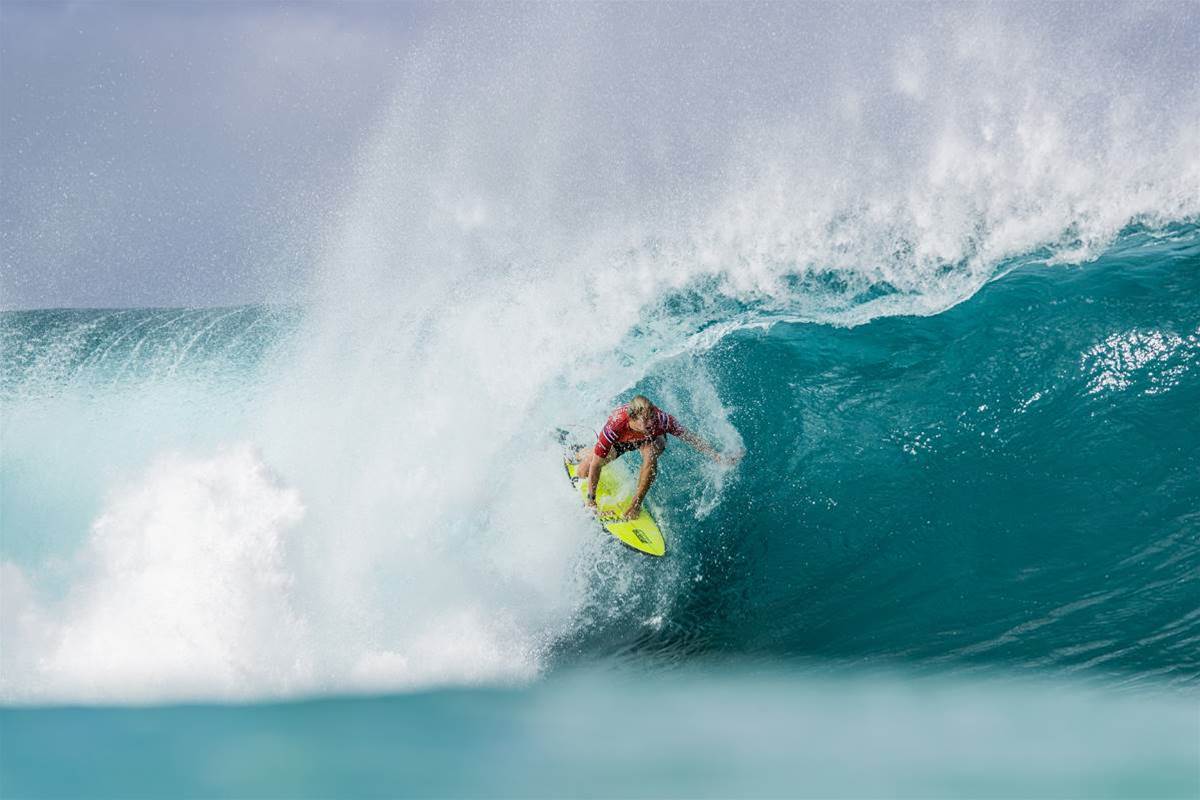 John John contorts his way through an inside drainer at Pipe. Photo: WSL/ Brent Bielmann

John John always looked comfortable against Connor O’Leary. Seeing JJ’s yellow, Pyzel Ghost spearing the froth on a foamy Backdoor runner was a welcome sight after days with the contest in limbo. John John lodged an eight for muscling through the clamping right and then snapped his yellow spear on another deep one at Backdoor. Thankfully he had a fetching, blue-sprayed back-up. Bring on the colour.

Critically, it seems John John has overcome his worst enemy at Pipe contests – himself. He is always going to go on the bombs but he’s learned to take a wave that he might not look sideways at in a freesurf, if it means progressing through a heat.

Jordy Smith started slowly against Mikey Wright, skittering nervously across a couple of Pipe lefts. However, as Mikey struggled to find a wave of consequence, Jordy emerged from a hissing Pipe left clenching his fist and roaring like a gladiator who’d just slain all his opponents. The judges dropped an 8.10 and put Jordy in a commanding position.

Much has been made of Jordy’s decision to buy a North Shore home and spend a lot more time in Hawaii. It’s not easy to leave the ego at the door and admit you have a weakness in your act, but Jordy has done that and it’s finally paying dividends. Just one good ride was all it took for Jordy to end Mikey Wright’s run.

Kaipo billed Ethan Ewing as the incarnation of Andy Irons in his heat against Kelly. The commentary team talked it up, but the heat was a slow starter. Kelly had a quad in his quiver and paddled out on a 6’4” Tokoro thruster. There was no sign of the Mike Woo twin fin that threw a curveball at the field in round one. 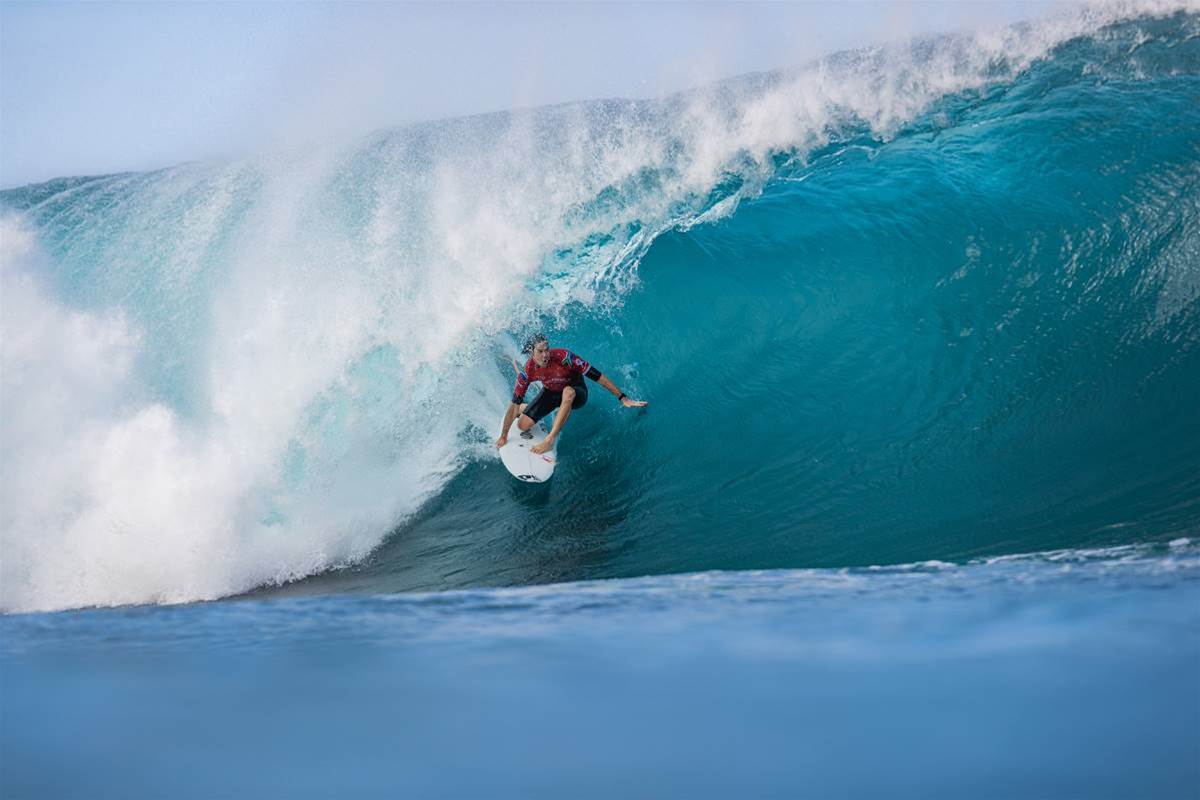 Jordy Smith has radically improved his act at Pipe and is through to the quarter finals. Photo: WSL/Brent Bielmann

Slater pulled into a giant closeout at Backdoor, got hung up and went over the falls at Backdoor, and then caught an edge after soul-arching out of a barrel at Backdoor. It wasn’t going well. They didn’t even replay the over the falls where he didn’t make it to his feet to spare Kelly the loss of dignity. Meanwhile, Ethan tucked into a few smaller tubes and chipped away. It was measured and disciplined and a little conservative. Ethan may have a style that mirrors Andy’s but as far as personality goes they seem diametrically opposed.

Kelly recovered from his heavy wipeout and undignified drop to claim three quick, mid-range scores and take control of the heat. ‘Andy Ewing’ had missed his big chance to upstage King Kelly and you could almost hear Andy Irons cursing from the grave. 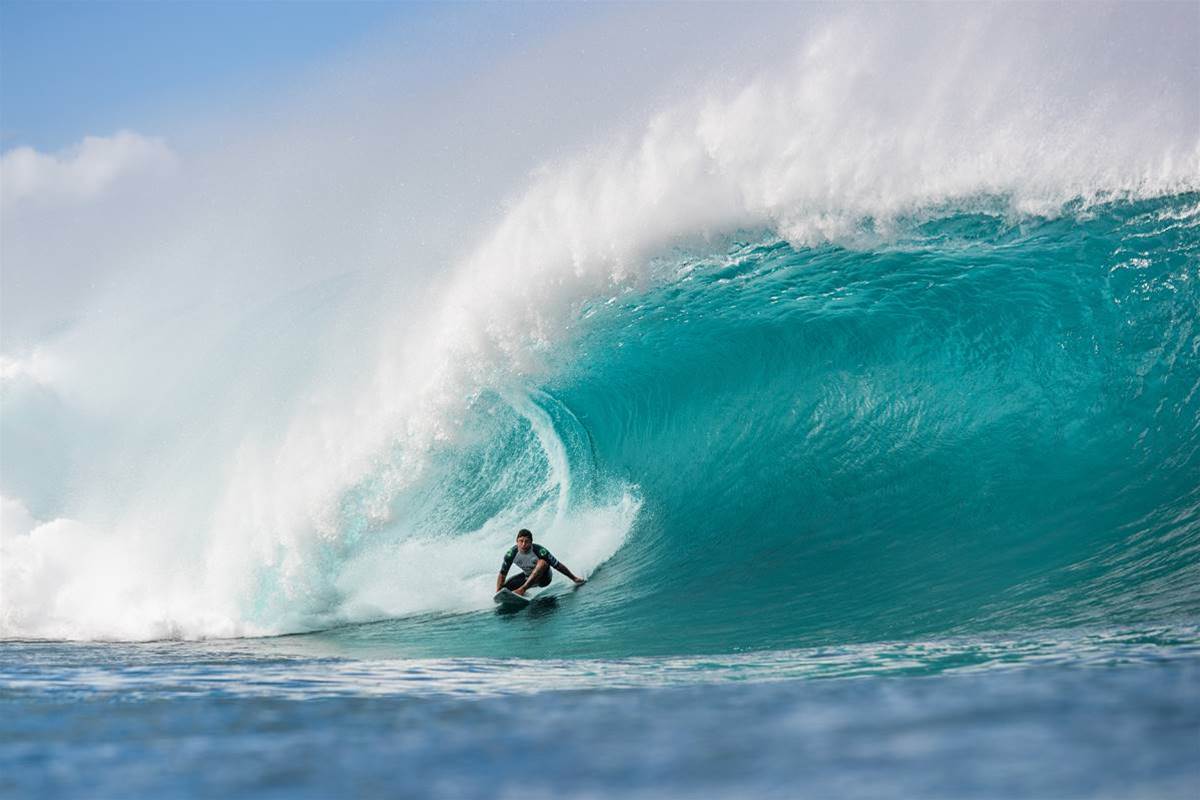 Peter Crisanto was bundled out in the round of 16 but not before he took some of the day's boldest drops. Photo: WSL/Bielmann

Almost everyone was wearing a mask in the post-heat interviews and sounded a little like Bane from the Bat-Man movies. A few, like Jack Robbo, saw the fashion statement opportunities and went for a tropical look. Kelly didn’t wear the mask to deliver his comments. When COVID sees Kelly it is scared off by the bright aura, which beams forth from his glossy dome. Kelly did however inadvertently raise an important health issue. Kelly claimed he got stunned and blanked out for a few seconds after his head slapped the water at Backdoor. In any other professional sport, these days, if you blanked out for a few seconds you would not be back on the field without a full evaluation by a medical professional. Stopping the clock to do an assessment is an impractical proposition, particularly with the overlapping heat format, however, paddling around at Pipe semi-concussed can never be a good thing.

Jack Robinson demonstrated why he is considered a superior tube rider. Robbo doesn’t just pull in and hope on his backhand at Pipe. Even with a hand on the rail he is pumping and trimming, shifting weight, changing his line, and adjusting his speed. Critically, Robbo has the ability to climb high while in the barrel and exit in the top third of a pinching pit. Many others get caught by the lip as they stay low.

It’s the sort of skill that separates the good barrel riders from the great ones. Robbo lodged the day's highest heat score with a 9.23 and 8.5. against Julian Wilson, a former Pipe Master. Barrel riding has gone to a new realm and to secure an excellent score at Pipe you more or less need a set wave, a steep take-off, a long barrel, and a dramatic exit – preferably after the spit. Those are the boxes to tick and Robbo was the only one who did it twice today.

It’s early days but the result will certainly do nothing to help Julian Wilson in the quest for a world title. There was some suggestion of a hamstring injury for Julian, but today Robbo made him look pedestrian.

Italo Ferreira survived a scare in a low-scoring heat against an unusually subdued Sebastian Zietz. Italo will have to summon more if he wants to defend his Pipe Crown or just get a keeper result in his first event as defending world champ. Ryan Callinan will be a worthy opponent in the round of sixteen, but one senses we are yet to see the best of either surfer.

Meanwhile, Medina took a little while to kick the engine into gear against rookie Morgan Cibilic but eventually, the Pipe aficionado cruised to victory. Medina will face an in-form Jack Freestone in the round of 16. Gabriel is the best, Pipe goofy-footer remaining in the draw. He's supremely confident going left or right in the tube and can go to the air if required.

Despite the tough opposition, the signs are very good for Jack Freestone, who has put together back-to-back, solid heats. A big deal for a historically volatile surfer. Freestone attributed his form to the fact he has spent the last year in Hawaii (mostly living on Kauai with partner Alana Blanchard) and has put in a lot more time in the lineup at Pipe. Jack was also happy to drop the comp jargon and get a little trippy when asked about his 8.83 at Backdoor. “It felt like I was time-traveling in there”. Freestone is relaxed and confident and has the talent to be a threat.

Under-pressure contest director Marty Thomas knows he only has a few days left in the waiting period and made the call to keep rolling into the round of sixteen where John John was again willing to extract the juice from lesser waves to take control of a heat. He squeezed through insider drainers at Pipe and Backdoor to secure a 4.5 and a 4.0 in the round to overcome gutsy rookie Matt McGillvray, and set up a quarterfinal clash with Leo Fioravanti.

Fioravanti is making the most of his official CT status, nudging past the bold Peterson Crisanto in the round of 16. Leo may have grown up in Rome but he’s spent a lot of time camped out at The Quiksilver house at Pipe. While others often scurried home after the contest series was over Leo would hang around in Hawaii for Christmas and beyond. He also has a healthy respect for Pipe after breaking his back out here in 2015, while surfing in the Volcom Pipe Pro. Leo will start fast, apply the pressure, and likely force John John to be at his best.

Jordy Smith maintained his momentum into the round of 16, steamrolling Caio Ibelli who is no Pipe lightweight. Such was the confidence of ‘Aloha Jordy’ that he was flinging himself into heaving, semi-closeout lefts with no hands on the rail. Jordy seems well aware that a hunt for a title begins now and there is no time for warm-ups.

Set the alarm for the call. The first heat of the next day of competition will see a delicious match-up between Jack Robinson and Kelly Slater. If the waves turn up we might just get to see who is the best barrel rider of them all. Kelly thrives on taking down heavily touted younger opponents. Jack is the form surfer of the event but will need his full cache of skills, and to avoid being sucked into any mind games if he wants to topple Kelly at Pipe.