How a weight lifted has added muscle to the second coming of Adriano de Souza.

It may stand as the moment within an event overflowing with moments, and the goddam Drug Aware Margaret River Pro isn’t even finished yet.

Adriano de Souza, about to wear a three-wave load of Indian Ocean fury on his head but with arms raised to the heavens none the less.

“I knew at that point I’d beaten Kelly and I was just so, so relieved all I could do was throw my hands up and say thank you,” recalls de Souza.

“But it was still painful. They were some solid waves.”

Indeed they were, yet even from the air-conditioned comfort of the event’s media booth it was hard not to get caught up in the emotion of the moment, knowing that the skyward bound hands were also an acknowledgement of the late Ricardo dos Santos.

“Wherever he is, he definitely does whatever he can to help me out,” says de Souza of dos Santos.

“He was a really strong man or else he wouldn’t have fought for his life the way he did at the hospital.”

The tragedy that shook the surfing world hit like a hammer back in Brazil and like many, de Souza was simply floored.

“In the beginning it was hard for me to do anything,”

“I was coming back from surgery and doing physio almost every day, but I just wanted to stay home and think about how short life is and what our goal is here on earth. Then I started to think about how strong Ricardo was and I decided to be stronger.”

A semi at Snapper and a final at Bells would attest to that decision yet there is also a calm air surrounding de Souza as he makes his way around the competion site here in Margaret River each day.

One that no doubt is owing to a small load being lifted by Gabriel Medina’s world title win last year.

“Everything happens for a reason,” he argues.

“Of course I wanted to the first Brazilian to win the world championship but at the same time I always knew Gabi was always going to be a champion one day. He had a great year last year so he deserved to be the World Champion. Ultimately I saw it as only a good thing. He became an idol in Brazil, surfing is more popular that ever there and I don’t have all that pressure on my shoulders anymore.”

Two days after de Souza’s crushing defeat of Slater, the competition site made for an odd spectacle as the sun set last night.

Aside from the hum of two gigantic generators powering the monstrosity, it was largely empty due to a traffic accident earlier in the day, which blocked traffic to and from it.

Out to sea, the swell that’d delivered so much over the past four days breathed its final breath and the waiting game has begun for the arrival of the next one, due tomorrow.

It’s looking like a meaty one and odds are it’ll be enough for The Box to light up one last time and deliver a fitting end to a crazy competition.  In three hotel rooms and one comfy house up the road in Yallingup, four competitors are also waiting.

“It won’t be who is the best in those waves,’’ says de Souza of the final four.

“It will be who is the best in 35 minutes of those waves. Either way, I’ll be calling on Ricardo’s help. It’s because of him I know I can destroy them. Let’s wait and see.” 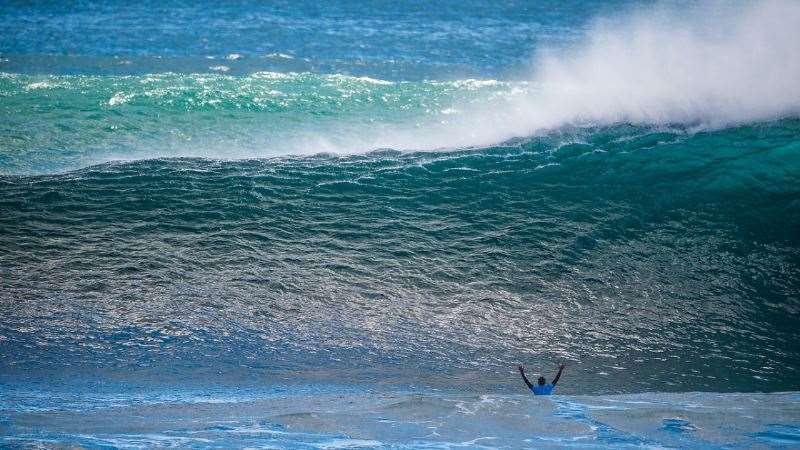 “I knew at that point I’d beaten Kelly and I was just so, so relieved all I could do was throw my hands up and say thank you..” - Adriano de Souza. Photo: Joli

Tune in when competition resumes here.