The shots that got you grinning from ear to ear and filled you with stoke.

The brief for the Stoke category was as follows:

How do you interpret that feeling that we as surfers all chase? That feeling of flying out of a tube, of standing up on your first wave, of running over the dunes to find the waves are pumping, of seeing a friend get the wave of their life – it’s stoke. It’s up to you how you capture it but that’s the crucial ingredient we’re looking for.

A massive congratulations to Jack Dekort whose ‘Running Man’ was voted by the public as the winning image, and has just earnt him a tidy $1000.00 "During a month long stay on 'The Rock', a handfull of friends and I decided to chip in for a run down Jeep from Honolulu for $1K. The only catch was it would only kick to life with a good old fashion clutch start, resulting in many embarrassing push starts from the Pipe car park. Due to standard Jeep issues we arrived late to Pipe this day. That was when I captured 'The Running Man', named after the 80s cult dance. I never found out the identity of the guy in the shot, which is a bit of a bummer." - Jack Derkort Third Runner Up: CJ In Tahiti by Ryan Miller Fourth Runner Up: The Wildcard by Trevor Moran 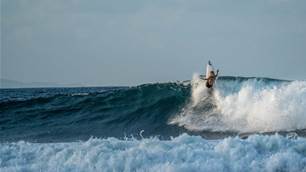