Early trips to Hawaii, surfing against Michael Peterson and a magic Pipeline board…

South African-born, 1977 World Champion Shaun Tomson turns 66 today. Now based in California, surfing’s original tube maestro remains one of the sport’s most eloquent and well-respected figures. Tracks recently caught up with him to discuss pivotal moments in his career, the relaunch of his brand Instinct, and his reinvention as a writer and motivational speaker. Below is an excerpt from the interview, which will appear in the following issue of Tracks Issue 581, on-sale October 21.

You first went to Hawaii when you were 14 in 1969 and there is a story about you witnessing the fabled wave that Greg Noll rode at Makaha that was for so long considered the biggest wave ever ridden?

So we'd all been out there in the morning. It was just like Randy Rarick, Keith Paul from Australia, Rolf Aurness George Downing – all these legends and here’s little me, I'm 14 and out there with all the big boys freaking out. I mean, I just paddled out there because I wanted to have a go. And then it just kept getting bigger and bigger. I nearly drowned – I got a couple and then got drilled. And then later that day, I was with Albe Falzon and Baddy Treloar and my dad had rented an apartment, right above the break. That's where we were staying at Makaha right on the beach. So we had the vantage point of the wave. And my dad took a movie of it and Albe actually got the wave on camera, but over the years the story has sort of shifted around ... … but it was a beast of a wave, and you know what happens at Makaha as the wave moves down the line and it goes into this section – they call it the Bowl – where the wave increases in size. So the whole wave gets massively bigger. And Greg just fired across that towards the Bowl and the whole Pacific Ocean just unfolded on him and it just like destroyed him.

After you defeated Jeff Hakman in the final at Sunset in early 1975, you deferred university and went to Australia to compete. What was that experience like and was there a sense that things were starting to happen with surfing as a sport and as an industry?

I went to Australia and competed in 1975. I became very friendly with Phil Byrne in Hawaii. I loved Phil like a brother and landed in Melbourne airport and I was picked up by this amazing Aussie guy John Pawson. He was a legend down in Bells Beach. Actually, we lost him a few years back, he got killed on the button at Winky. And I stayed with him and I just had the greatest time. That's one of the best trips I've ever had to Australia. Meeting Aussies, understanding the lifestyle and getting connected with the culture and the heritage … You know the whole surf industry was just starting to happen. Quiksilver was starting to bubble up and Rip Curl was starting to bubble up and everyone was friendly and it was vigorous competition. It was really good. And I remember I came up against Michael Peterson for the first time. At Bells Beach of course he was the God. And I remember it was like nine rounds and I won eight rounds, and I went there's no way I can be beaten now and somehow Michael Peterson went past me. He thought I'd beaten him. When they had the prize-giving, they announced, “And in second place, Shaun Tomson,” and I was like. ‘Ah, the bastard has beaten me’. And no one could find Peterson; he thinks he's been beaten so he hasn't turned up and that was my first experience of Peterson and you know what an amazing surfer and a paddler. I used to study the guys’ paddling styles. I thought I was the fastest paddler on the tour. And then I watched him, and then I copied his paddling style because that dude was a machine. And you know, we had some other battles over the years and then unfortunately he retired in ’77. He retired too young. I mean, he had his own demons. Shaun hooking under the lip at Pipe on his Spider Murphy Pink Banana.

You arrived early on the North Shore in the winter of 75/76. That’s the year you really started to push it at Off the Wall, Pipe, and Backdoor.

I had this unbelievable board that spider Murphy had made me, it was a complete fluke; it eventually became known as the ‘Pink Banana’. But it had a huge amount of rocker. I'd asked Spider to copy a big Brewer board because Brewer was like the legend. He shaped all Hackman's boards and he was the king at Sunset. It was supposed to be for Sunset but when he was shaping he couldn't get enough curve in the board. So he put some bricks on the nose and it bent it and it came out like this banana and it was supposed to be red and ended up pink. Anyway, I took it out at Sunset and it was dog. I spun out on my first wave and a guy ran me over and then I rode it at Pipeline and for some reason, it just fitted perfectly into the face and you know I rode that board eventually for five winters and I never lost it on take-off once. So that board gave me so much confidence. At Pipe, as long as you can get to the bottom you know, you're usually going to be okay. You get to the bottom and you pull up into the tube but when you go over the falls and when you lose it on take-off that's when you're going to really get hurt. I understood that and so I used to go really hard at Pipeline, a few of us went really, really hard because we wanted to be known. It was also very cool to suddenly be just some young dude off the beach at Durban and now you're up against like Rory Russel, Barry Kanaiaupuni, Jeff Hackman Reno Abellira – like these guys were gods. Read: Following the 'Instinct' label into a new era. 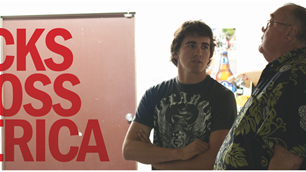