“If judges in other sports make mistakes they don’t go back and play the game”.

The WSL’s new priority rule came into play today in dramatic fashion. In Round 3, Heat 9 Mick Fanning and Kanoa Igarashi faced off on the cobblestone point, both needing a win to advance through the draw. When the first wave trickled into the lineup, both turned to catch it, with Kanoa closer to the top of the peak. Waiting to see whether the Japanese-American surfer would commit to the wave, Mick pulled back. At the last second Kanoa passed it up. Fanning immediately threw his hands up in the air gesturing to the judges that they should hand him priority, as the new rule states. They didn’t. Kanoa then picked off the next wave of the set – the best wave of their heat – and lit it up. After dropping an 8.97 he backed it with a 7.57 and Mick was out of the event.* 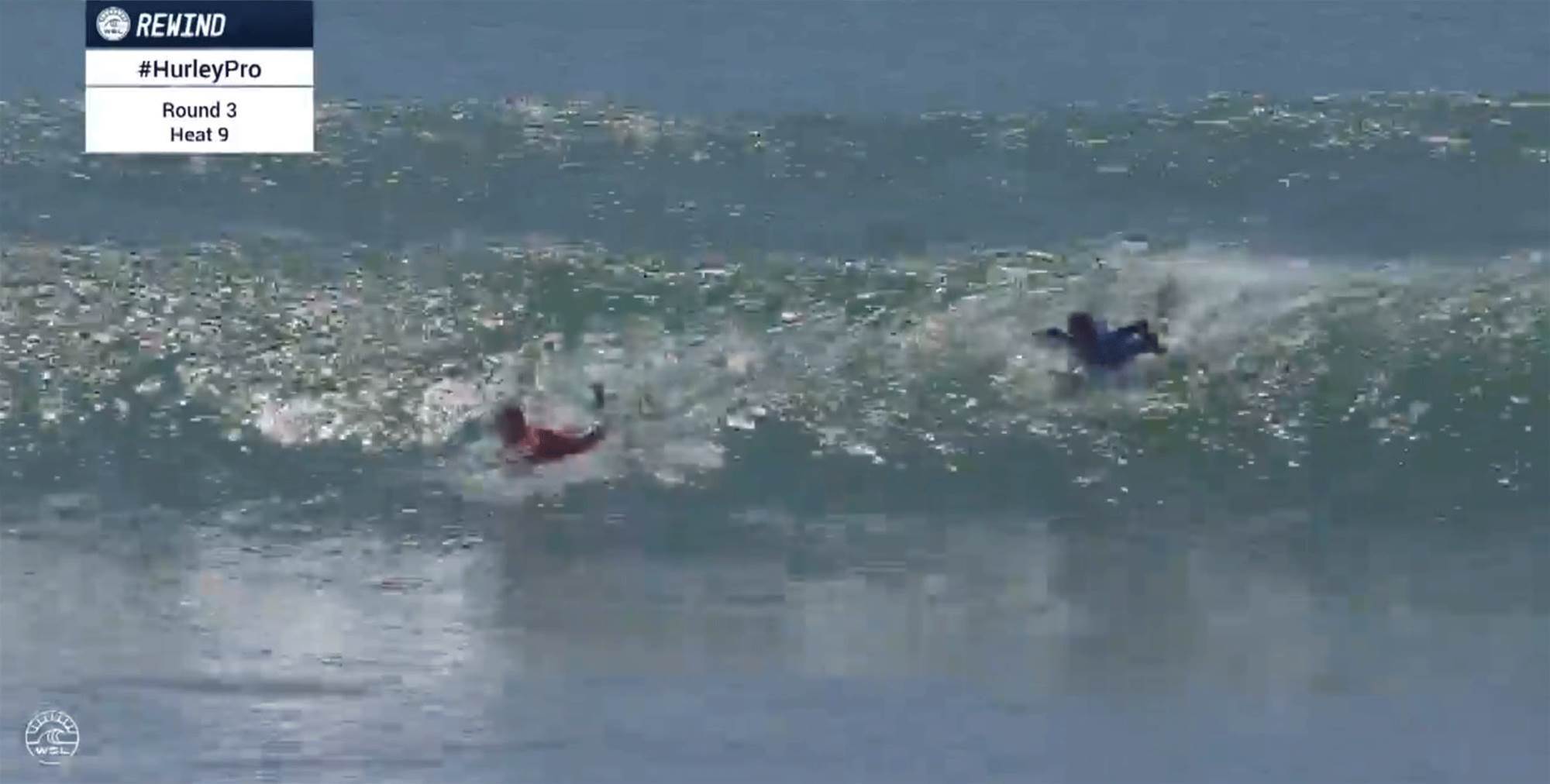 Is Kanoa Igarashi showing intent to take off?

Yesterday Richie Porta explained the new rule during Leo Fioravanti & Wiggolly Dantes’ heat: "According to the new rule, priority can be awarded to a surfer (in this case Leo) if his competitor (in this case Wiggolly) makes a committed paddle for a wave in order to block another surfer, even in non-priority situations (i.e. the beginning of a heat).”

Here’s where the drama ensues: Mick protested the result. And on review the judges admitted that Mick should have been given priority, deeming that Kanoa had in fact blocked Mick from taking the opening wave, thus potentially changing the whole outcome of the heat. Now hindsight is a wonderful thing but doesn’t this just reek of unfairness if you’re say, Kanoa who surfed a near perfect heat? The pair will now re-surf first thing tomorrow. A huge bummer if you’re Kanoa.

The bungle from the judges’ bunker isn’t a good look for the WSL. Sure, it’s a new rule but the call should have been made during the heat. If there was a seed of doubt, the heat should have been stopped, allowing the judges to review the incident some more and determine whether Kanoa blocked Mick on the opening wave. One commentator hit the nail on the head: “If judges in other sports make mistakes they don’t go back and play the game”.

If you’re on the east coast of Australia then no doubt you will be following finals footy. Rugby League refs have been under massive scrutiny for decisions that have cost clubs their season. Yet not one ref has come out and acknowledged they got it wrong. It just doesn’t happen. Refs stand by their decisions – despite how bad they might be (hello Manly fans!) and the fans, commentators, players and coaches might bark like mad but the result remains the same. No one is getting a rematch so why should pro surfing be any different?

“To me the more rules you implement the more complicated the thing becomes and I’d rather the surfers sort it out than it be sorted out on the beach by other people. You’ve got to be careful with that…”

“It’s a bit of a hard one to have an opinion on because I’m just not a fan of rules in general. Let’s just let them go and sort it out.”

However, Pottz, a surfer notorious for his aggressive heat tactics believes borrowing a rule from footy might be the answer.

“Why don’t we just flip a coin before both guys go out?” Introduce both guys, flip the coin heads or tails, you get priority get out there and start heat and that way you know exactly where you stand.”

With more rules comes more controversy. The WSL will now be walking a tightrope to make sure its judges exercise an arguably subjective rule in an already subjectively judged sport.  Maybe asserting priority before surfers hit the water is the answer. But for mine, I’d rather see the paddle battles, elbows and odd verbal stoush.

Should Mick & Kanoa have a re-surf? Tell us what you think.