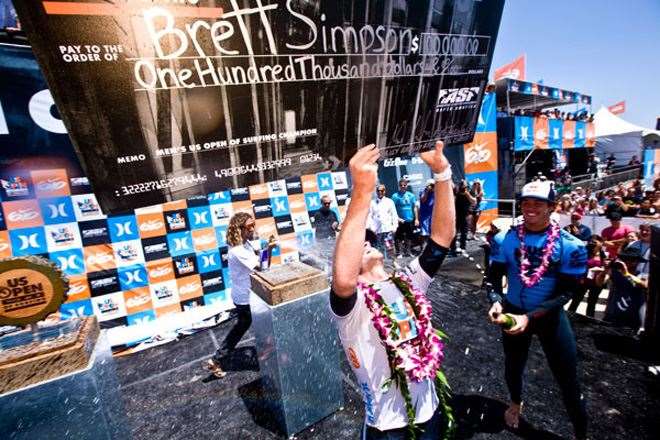 Brett Simpson pinches himself for a second time.

Surfers competing in the US Open of Surfing are out to clinch the crucial ratings points on offer towards their ASP World Ranking while ASP Pro Junior surfers look to finish atop their regional ratings to qualify for the inaugural ASP World Junior Tour.

Simpson, who marched to a dream victory in front of his home crowd last year, surfed consistently throughout the event’s entirety to charge to a nearly unimaginable repeat performance to take his second consecutive US Open of Surfing title and mass of ratings points on offer towards his ASP World Ranking.

“Last year barely sank in and now I won this year,” Simpson said. “It’s so hard to imagine it all over again because you have to stay consistent and surf so many heats. Luckily I zoned everything out and tried not to worry about the points or the money and that’s when I have competed the best. To be at home with so many friends and family, I’ve enjoyed it so much. To win out here two years in a row is unimaginable. ” 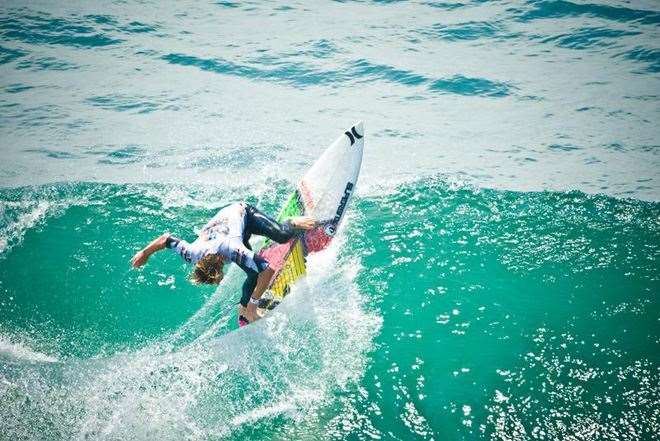 The outside move is ofeten the set up for the untington op [pump to the shore break close-out reo]. Brett Simpson again.

Simpson, who is currently competing on his rookie year on the ASP Dream Tour, jumped out to a quick start in his matchup against the South African juggernaut in the Final and built momentum throughout the heat, leaving Smith looking for a near-perfect score in the dying moments of their matchup.

“Jordy (Smith) has been getting quick starts, so I tried to go out there and get a decent start,” Simpson said. “I got a five, and it was a low scoring heat, but all the waves I caught I maximized. Jordy had that one wave, where if he pulled that air it could have been a different ballgame. That’s the risk you take to be rewarded and with the level these days, that’s where it’s at. I kind of stayed conservative and built my scores, but either way, a win is a win.” 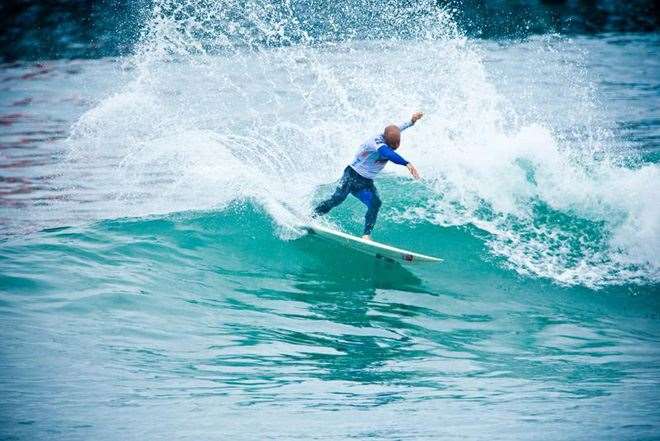 “It’s amazing to beat those guys,” Simpson said. “I guess this is my best chance to compete against those guys and I know the wave really well and I just go out there and stay confident. I know which waves score the best and that’s all you can do against those guys.”

Smith, who posted the highest scores of the day in the Quarterfinals, ousted dangerous ASP Pro Junior surfer Miguel Pupo (BRA), 18, in the Quarterfinals and reigning two-time ASP World Champion Mick Fanning (AUS), 29, in the Semifinals, but was unable to find a rhythm against Simpson and placed second overall.

“It wasn’t exactly J-Bay, it’s Huntington, it’s never going to be perfect,” Smith said. “You’ve got to kind of adapt to everything and Brett (Simpson) did that the best. It’s a big event and Brett has done it again, congratulations to him.”

Smith has been on an absolute tear throughout the 2010 ASP season and has been a consistent finalist in several events. Although Smith was hungry to clinch the US Open of Surfing title, he was pleased with the result and the ASP PRIME points.

“It’s still a good result,” Smith said. “We’ll see how the year goes from here. I don’t want to count my chickens before they hatch. I am having a pretty good year. I’m just relaxing and feeling confident.” 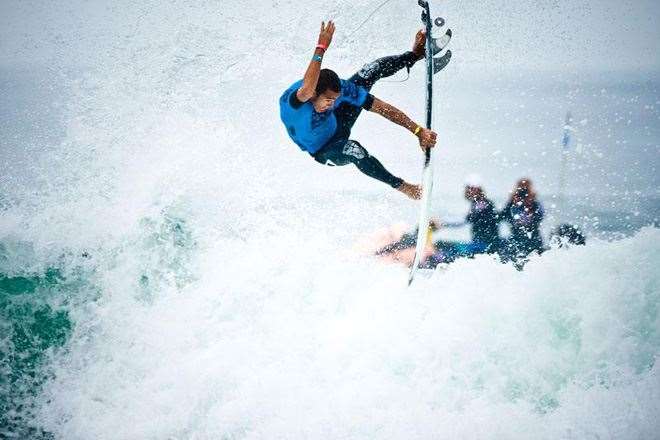 Another day another inverted air-reverse from JAdson Andre. Unlucky to lose to Mick Fanning in the quarters.

Evan Geiselman, who put in an amazing performance in the men’s ASP PRIME event via his wildcard entry, stormed to victory in the ASP Grade-2 Pro Junior Final over a tough list of talent including Alejo Muniz (BRA), 20, Kolohe Andino (San Clemente, CA), 16, and Miguel Pupo (BRA), 18.

“I just had fun this whole week,” Geiselman said. “I took it serious, but just had fun and did what I wanted to do. I didn’t let anything get in my heat and just surfed.”

“I think I’ve just been rolling off of this whole year with confidence,” Geiselman said. “This year has been crazy for me and I can’t believe it. To win the ASP North America Pro Junior Title is amazing and I’m just looking forward to going to Bali. That was my main goal this year, so this is awesome. I don’t even know what to say.”