Whose doing what where at the pointy end of the event.

We are reaching the pointy end of J-Bay with 16 men and eight women surfers left in the event. An improving forecast and all the sport’s heavy hitters still left in the draw means that we could be in for an epic conclusion. We throw all the heats into the centrifuge machine and spit out the ones worth further analysis.

Jordy goes into this heat as the massive favourite, based on form, ranking, local knowledge and his event heat total average. He’s been surfing with authority and confidence and is desperate to win at J-Bay for the first time since 2011. However with a lack of tubes being served up so far the judges have been rewarding the goofy’s vertical approach (there are six backsiders left in the field) and Owen has been quietly, but efficiently, progressing through his heats. Any increase in swell will too help is cause. However even so it’s hard to see Wright getting past Jordy and the Round of 16 for the first time in 2019.

The two goofy’s have been regular opponents in the last six months developing a mini-rivalry with each heat hard fought and closely won. Callinan prefers to let his surfing do the talking and will aim to avoid any of the paddle battles and competitive mind fucks that the Brazilian thrives on. However Callinan has added steel and focus to his outrageous talent and a win over the World Champ would see him leapfrog Medina and eye off a top 5 spot. Callinan however is yet to fire at J-Bay this year and will need to up his heat total significantly (his average for this event is 10.25) to stop Medina.

Prediction: A tight contest, but Callinan pulls off something special to win.

Both surfers have had poor starts to 2019 and whoever wins this heat will post their best result of 2019. Lau scraped through on the buzzer against Julian Wilson and the confidence gained from that late reprieve could be pivotal. Ace has been hampered first by a knee injury and then with the birth of his third child, but this is a wave where he has family links and that suits his lethal backhand. The end result is two very different surfers each with as much to play for as the other.  You sense there will be a struck match between them.

Ranked 6 and 7 in the world, a big result here is crucial if either surfer want to try and step into the John John-shaped hole at the top of the Jeep Leaderboard. Kelly has been confused by the judging admitting that he doesn’t know what he has to do to get a score above a six. It’s been a common theme of the year with the GOAT winning heats, but never coming close to posting scores in the excellent range. Italo hasn’t had that issue; he can pluck eights out if his arse at will, but has been inconsistent from event to event. It’s hard however to see Kelly combatting Italo’s radicalness, unless barrels come into play.

Prediction: Fireworks from Italo too much even for Kelly’s J-Bay muscle memory.

Quarterfinal 1 features frontside silky smooth style up against raw backside aggression and you’d tip the winner to go all the way and win the event. Watching Gilmore in full flight at J-bay it’s often inconceivable to see how she can be beaten and she has never lost a heat here. However it is perhaps only Marks, who posted the biggest heat total in the last Round, that has the point of difference and power to achieve the scores needed to outpoint Gilmore, all be it in a very different manner.

Prediction: Gilmore’s superior wave selection and experience should just be enough to take down the explosive 17-year-old.

Six of the eight Quarterfinalists are in World Title contention, which means each heat comes dripping with added pressure. Conlogue and Peterson are the two most aggressive surfers in the field, yet neither have put together a complete performance at J-Bay so far. Peterson, courtesy of her Final finish here last year, might just go in as favourite, but such is the closeness of approach and talent this Quarterfinal will come down to wave selection.

Prediction: Peterson just gets over the line in a super tight contest. 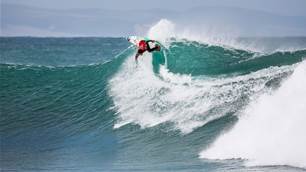 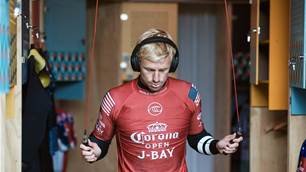 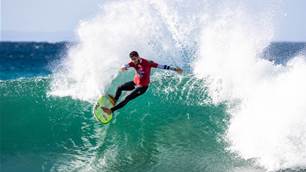