Toledo’s a Final freak, did the WSL miss a trick, John’s John’s tricky knee and other key learnings from Saquarema.

In a seething mass of bums, barrels and backwash, the Oi Rio Pro provided a high energy and fascinating instalment in the 2019 CT World Title races. Toledo and Fitzgibbons cemented their most winningest status in Brazil, while John John’s knee has potentially changed everything. We take a look at what it all means.

“Once I get into the Quarters and Semis, it's like something clicks in my head, especially here in Brazil," Filipe Toledo said after his win at home. Toledo has never lost a CT Final, winning eight from eight, three of them at home. In Rio this week his Finals Day momentum was again irresistible and he never looked like losing, even if he alluded to some behind-the-scenes problems. “A lot of people don't know, but I've been going through a very difficult year personally,” he said afterwards. “It’s been tough to concentrate on doing what I love most, but the crowd is what pulled me through and I'm eternally grateful.”

Did The WSL Waste Another Epic Day Of Waves?

With the Superbank / Dbah debacle, when organisers elected not to run the Finals Day on the best day of the event window, still fresh surely the WSL wouldn’t make the same mistake again? Well, the decision to run the event at the left, and not the rights of Barrinha on the big day might just fall into the same category. Kelly Slater, typically, had his say, all be it with a velvet glove placed over his social media iron first. “Muito obrigado to the local crew at Barrinha,” Slats posted on Instagram, “for letting me snag a few Off-the-wall like barrels before the event honed in on the spot.” Yeowwwwch.

A few waves before the event started today. Who hopes it finishes in waves like this tomorrow?? 📷 #nikonp900

Who Is Going To Fill The Massive John John-shaped Hole?

Last year’s knee injury kept John John Florence out of the water for six months. Yet in 2018 he didn’t hold a massive lead on the Jeep Leaderboard when he pulled the pin. His knee specialist will no doubt make the call, but his reaction to the injury may be different this time around. In any case his absence could blow the World Title race wide open. Kolohe Andino, Filipe Toledo and Jordy Smith looks best placed to capitalize on the Hawaiian’s poor fortune, but even those deeper down the rankings like Ferreira and Medina have also been thrown a lifeline. 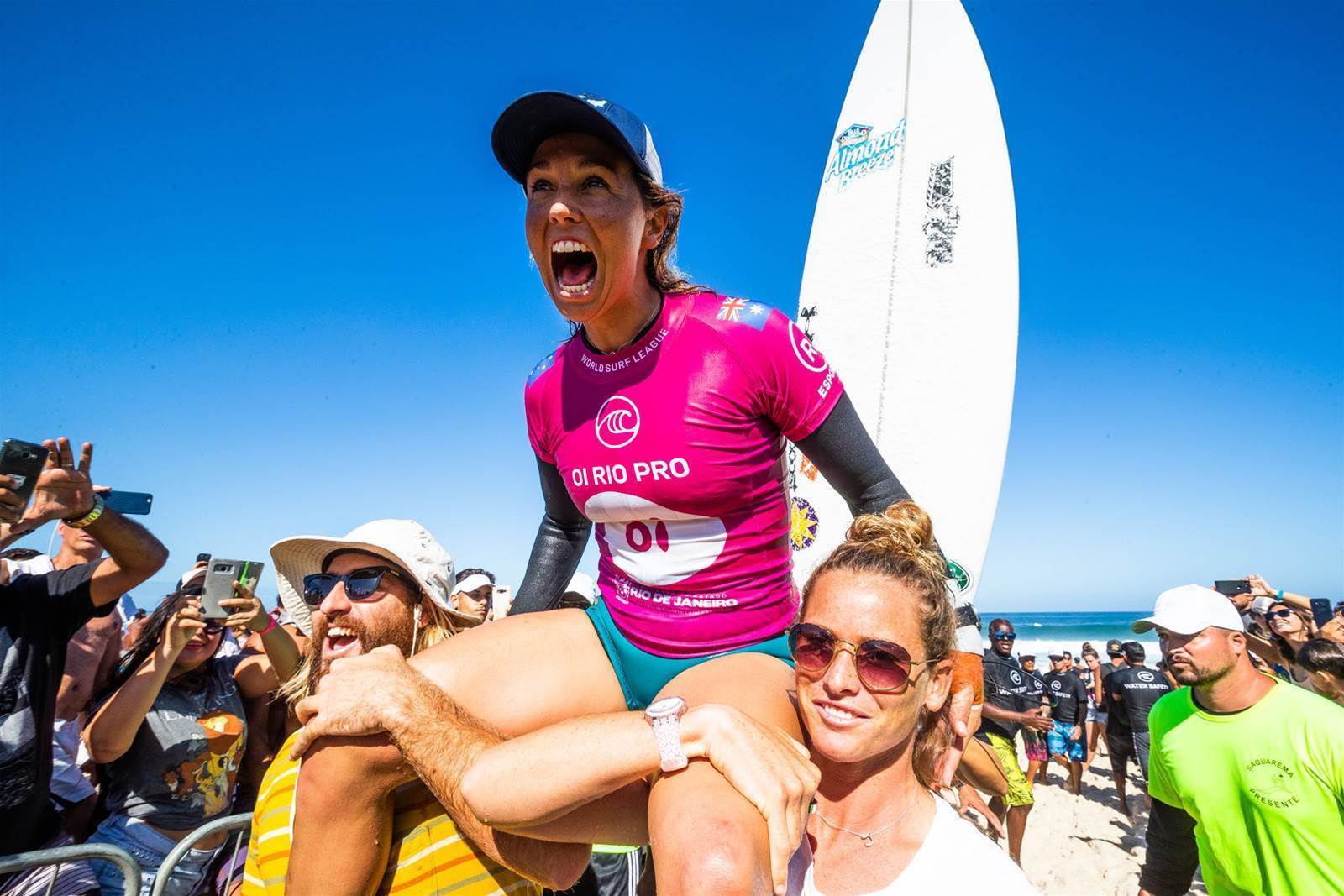 The Women’s Race Gets Even Tighter

Already close going into Brazil, Sally Fitzgibbons win in Rio bunched the field even more. There’s only 6,000 ratings points between the first six surfers on the Jeep Leaderboard and a struck match between Fitzgibbons, Carissa Moore and Stephanie Gilmore. Sally is now the third surfer this year to wear the Jeep Leader’s jersey. With Women’s surfing making rapid advancements at every event, the close World Title race is a result of the every deepening talent pool. It seems there is no way this battle won’t go all the way to Hawaii.

Kolohe Andino has made great strides in 2019 as a new found confidence and maturity has led to levels of consistency that Damien Hardman would be proud of. Andino’s early years on the CT were characterised by erratic veers in form, not just between events but often between heats. Yet Andino, now in his eighth year on the CT, has morphed into a reliable contest machine able to play the man, or the heat, depending on the situation. With John John possibly out of the equation he looks as good as anyone to fill the breach. Once he breaks through for his first CT win (he has lost all five Finals he has contested), a World Title now looks well within his grasp.

The move to Saquarema has breathed new energy and credibility into the Oi Rio Pro. With quality waves being added to the incredible crowd dynamic, this is an event that truly add something unique to the CT tour. If the organisers could get a handle on Barrinha, the real jewel in the Brazilian surf crown, the new respect will only increase.