It’s still over a month away, but it’s a great event to talk about.

The Gold Coast. It is always exciting to start thinking about the first event of the Championship Tour – the Quiksilver Pro Gold Coast – and the juggernaut that it is.

It’s a huge machine, and one of the showcase events for the World Surf League where they can invite the VIP’s and show them exactly what the WSL is all about.

It is also a time where they can invite celebrities and treat them with all the luxuries and indulgences that these people expect, in their bid to up the profile of professional surfing to the proletariat.

It works to great effect, and every year the WSL and the Gold Coast up the ante and brings a bigger and better party to Snapper, and the yearlong CT festivities begin.

The only problem is that the waves seem to consistently avoid this event. It’s the one event that is constantly plagued by a lack of swell. It has everything going for it, with one of the best sand-bottom right-hand points in the world, the best set-up, the greatest fans and the most perfect weather, yet the swell never seems to arrive.

Actually, there is usually swell around, it just arrives a few days to soon or a few days too late, and the bulk of the waiting period seems to often have tired and listless waves for the duration.

It doesn't really bug any of the competitors, with any of the competitors on the premier Championship Tour, highly adept at surfing tiny waves for maximum, points, it just seems that for the fans, it’s often a bit of a let-down. All everyone wants to see is the world’s best surfers getting a crack at the Superbank when it is legitimately going off.

There are often good waves around for the Margaret River event, and Bells is Bells and always brings something to the party, but Snapper is often moody, sullen, bringing in bit and bobs along with a few sudden surges.

Let’s all hope that this year is the year she arrives for her own party. There are going to be some very important people watching, including some Facebook budget holders, a few billionaires who own the WSL and quite possibly some famous musicians and movie stars. Wouldn't it be great if they get to see just how good surfing is at the moment?

To be able to see Filipe and Jordy and John John in a heat in perfect, offshore five-foot pits, going head-to-head-to-head in an exciting heat of aerial surfing, barrel riding and exuberant support from the beaches. That would be something to see, and even a non-surfer would be able to feel the excitement.

So we could have all time Snapper/Superbank, the best surfers going mad, Kelly rampaging all over it, and let’s not forget the best female surfers in the world, all vying for an early lead in what could be the most exciting year of professional surfing ever.

It’s so much better than, say, Freddy P stomping a rock on the inside in frustration. 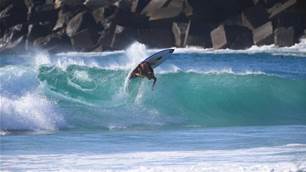 D’bah or Snapper? What the surfers are saying at The QuikSand Pro