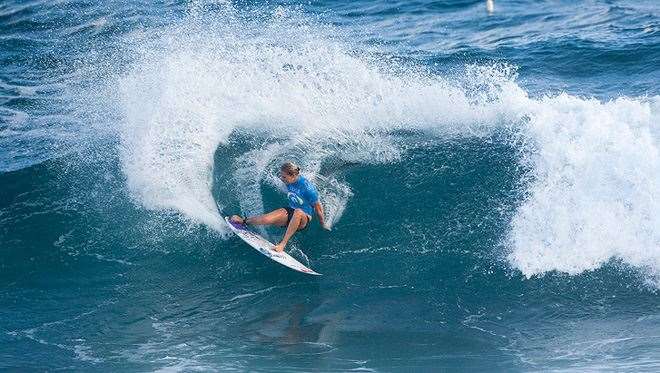 Steph was on fire through the day with this layback hack a highlight (check the low knee-to-board ratio). Pic: ASP

Event No. 7 of 8 on the 2010 ASP Women’s World Tour, the Rip Curl Women’s Pro Search Puerto Rico saw the historic clinching of Gilmore’s fourth, consecutive ASP Women’s World Title following her Quarterfinal victory earlier today, and the win over the young rookie to take out the event served as icing on the cake. 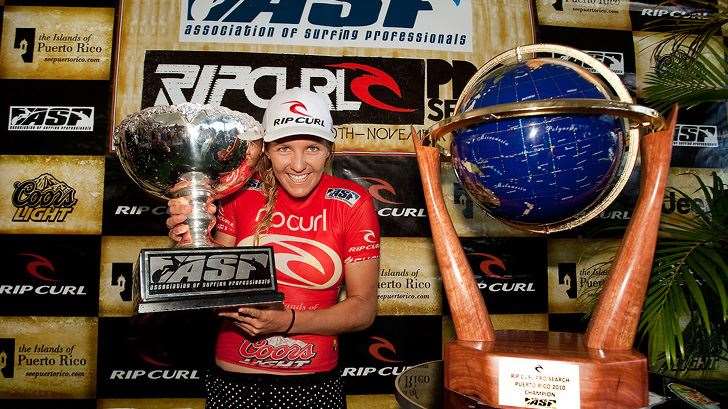 Winning the Rip Curl Search Pro comes with one of the bes trophies on tour... the world title cup was a cool bonus. Pic: ASP

“I actually dreamed this one up last night,” Gilmore said. “Maybe I’m still dreaming. It’s been a monumental day for me. I mean, the best mindset to have in your heats is to be relaxed and calm, and after winning the title in the Quarters, I just felt really calm. So it worked out well and I think I actually surfed better after it was done and dusted.”

In challenging afternoon conditions, it was Gilmore who drew blood early on, locking in a near-perfect 9.80 out of a perfect 10 for a searing forehand assault on a rare clean righthander.

“I was just really fortunate that that wave cleaned up for me to do some damage on,” Gilmore said. “Even afterwards, I just couldn’t find a solid backup. Carissa (Moore) has been ripping all event long and she’s so dangerous. I was honored to be in the Final with her and to win it, just makes everything that much bigger.” 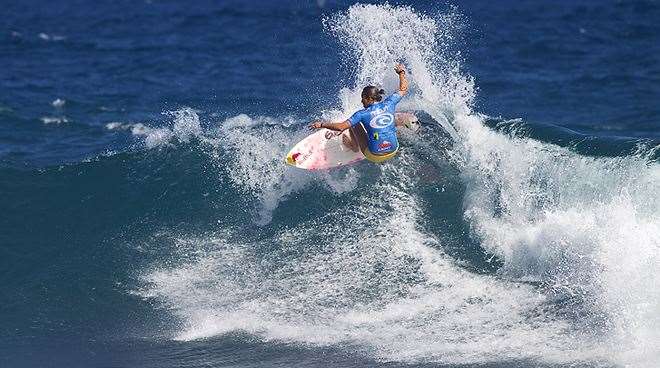 Carissa will be winning these events before to long... the Hawaiian is a class surfer. Pic: ASP

With her Runner-Up finish, Moore moves from 5th to 3rd on the 2010 ASP Women’s World Title Race, recording one of the most impressive rookie seasons in ASP history.

“Of course I wanted to win but to be in the Final with Steph (Gilmore) after she just accomplished what she did was really special,” Moore said. “I’m really thankful to be here in Puerto Rico – it’s beautiful and warm and really reminds me of home. I’m looking forward to heading back to Oahu to finish the season out.

Sally Fitzgibbons (AUS), 19, was one of the form surfers of the event, consistently notching the high single-wave and heat totals each round with unmatched power and ferocity. However, the young Australian was unable to halt a late charge from a rampaging Moore in their Semifinal bout.

“It’s disappointing to lose when you have a strong lead early on,” Fitzgibbons said. “That’s the way it goes sometimes. It’s been a strong event for me, but I’m still looking for that first win. That’s my goal for the next event in Hawaii and I want to finish strong to set me up well for a big year next season.”

The historic occasion marks the first time an athlete has achieved a perfect record in the professional surfing world, with Gilmore claiming the coveted crown in her rookie season and every year since.

“I guess I haven’t really been thinking about that,” Gilmore said. “But to hold a record that Layne (Beachley) or even Kelly (Slater) never got is pretty special. I never thought I would even win two, consecutive titles so to win four is a massive achievement for me.”

In one of her strongest performances to date, Gilmore’s comprehensive and unabated assault on the 2010 ASP Women’s World Tour marks the first time the prodigious natural-footer has clinched the crown before Hawaii.