Surfing sucks, so try these pastimes to float your boat.

In Surf Hobbies #1 we covered Brazilian JuJitsu and Golf, and such was the interest we’ve been forced to make up more. This episode we delve in strings and wheels and pick apart the guitar and dirt biking.

What is it? A wooden six stringed instrument influenced by the European lute and its cousin, the four-string oud. The instrument remained relatively obscure for 500 years, until made famous by Jack Johnson in 2003. While Jack Johnson didn’t invent the surf guitar, Dick Dale and his surf music was around in the late 1950s, it was Johnson that elevated surf music and guitar onto such a level that many humans can’t remember a time when guitars were played before Bubbly Toes. Or if they did, what was the point?

What has it to do with surfing?  It was obligatory after each surf in the 1960s to sit around a campfire and play the guitar. In the ’80s and 90s surf punk exploded in violent shitstorm of ill conceived notes, with bands like Pennywise, The Offspring, The Sunnyboys, TSOL soundtracking a decade of surf vids. Another such band, Social Distortion, replaced Blink 182 at the Surf Ranch concert last year in a sentence so irrelevant I’ll be amazed if the internet doesn’t remove it.

Who does it?  Makau Rothman and Landon McNamara, whose ukalele skills I refuse to critique. Tom Curren does it, though much worse than he surfs. Steph Gilmore is also amazing at fretting herself to death. Ozzie Wright mistreats one in the Goons of Doom and Conner Coffin recently released an album of covers using a guitar. Many said his version were better than the original songs by Dylan, Hendrix and The Rolling Stones. The photo enough is to make a guitar gently weep. Kelly Slater too is so bad at guitar he often plays with Eddie Vedder.

What’s wrong with it? There is perhaps nothing so eyeball bleedingly irritating as the surfer dude who sits in the corner abusing the strings on a guitar with an endless series of half songs and amusing ditties. The fact that he often end up with hot chick, and not with the lute derivative wrapped around his neck, only makes it even more diabolical. 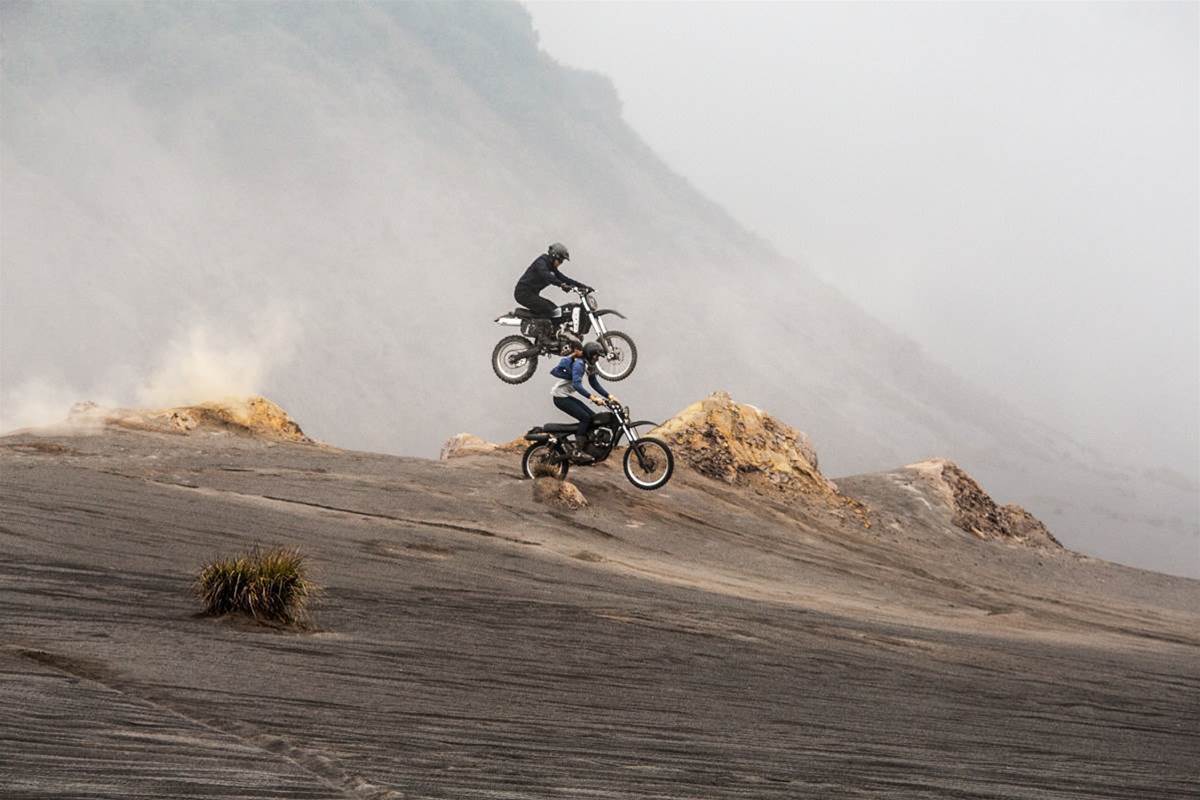 What is it: A motorbike is the thing you fall off in Bali and turn a two-week trip into one long infected graze. Dirt Bikes are used mainly on dirt, while, funnily enough, road bikes are mostly used on roads. Surfers and motorcycles have long gone together, the bike being the cheapest and most reliable form of transport throughout the waves havens of South America, Africa and Asia. Dirt biking however is not about transport, it’s about thrill. High speeds and big jumps make this a hobby for those who want fear and big shots of adrenaline in their non-surfing lives.

What has it got to do with surfing? Surfers have often tried to replicate the fear and adrenalin that surfing big waves produces and dirt biking does that better than most. While there is not the similarities of snowboarding or skating, there is very few feeling like having a massive powerful throbbing engine gurgling just below your testicles. Brands like No Fear and later DC, Fox and Monster grouped the different tribes together and most surfers have a few mates that are into their petrol as much as their pintails. In the States, an annual Surfercross moto event has been running for 12 years.

Who does it? Deus Ex Machina  is based on vintage motorcycle culture and sponsored surfer Harrison Roach has spent the last few winter seasons trawling through Indonesia on a customised Yamaha. He looks really cool,  especially near a Volcano. The Pipe specialist and freesurfer Ronnie Burns famously died on a dirt bike in Hawaii in 1990, but that hasn’t stopped many of Hawaii’s best surfers in their passion for dirt bikes. Sunny Garcia, Nathan Fletcher, Kalani Robb and Ian Walsh are fanatics. In Oz Gary “Kong” Elkerton was sponsored by KTM and Julian Wilson has a few tricked up 125s in his garage that he can’t ride for contractual reasons.

What’s right about it? The helmets are pretty cool and few hobbies provide such an intoxicating mixture of speed, adrenalin, carbon monoxide and bruised arseholes. Additionally the vagaries of the weather and wind are taken out of the equation and you can jump on a bike whenever you goddamn feel like it.

What’s wrong with it: It’s an expensive hobby with a ridiculously high injury rate. It seems that falling onto hard packed dirt whilst traveling at 70 miles per hour tends to be associated with various internal re-organisation. Environmentally dirt bikes tend to wreak a fair bit of damage on the natural forests and dunes where they are often used and the fuckers tend to break down on three out of every four rides. They are also quite noisy.