Foul play allegations are flying after the death of 60-year-old Surfer Magazine on October 2nd, 2020.

The magazine was conceived in 1960 to John Severson via maculate conception as a one-off promotion. From modest roots, the magazine grew into a position of ubiquity. Outliving competitors like Surfing and Transworld Surf bolstered the reputation of the Godfather of surf periodicals. For a storied franchise to die of natural causes and without ceremony is inconceivable. Even Luca Brasi, hand pinned to a bar with a knife and choked with a piano wire, was commemorated by a dead fish in a bulletproof vest. In the days since Surfer Magazine’s public viewing, conspiracy theorists highlighting circumstantial peculiarities have opened the door to speculation over who really killed Surfer Magazine.

Less than 24 hours before the periodical’s passing, the Surfer Magazine Instagram endorsed Joe Biden and Kamala Harris for the upcoming United States presidential elections. The political post proved a hearty kick to the hornet’s nest. From the public end, the endorsement stimulated a buzz from surf literati including Joel Tudor and Brett Simpson. These self-righteous iconoclasts lashed out at the politicization by Surfer in the comments.

Three suspects have been identified through investigation into the political canvassing that preceded the magazine’s death.

The first and most obvious suspect is A360 Media; after acquiring Surfer Magazine in February 2019, A360 may have seen the impact of Covid on an already struggling niche magazine and decided to bring out the piano wire.

The second suspect is former Surfer Editor, Todd Prodanovich; Prodanovich, knowing that A360 provides monetary support for incumbent president Donald Trump and wracked with leftist guilt at working for a company that supports Trump, may have made the unilateral political IG flex without considering the worst-case scenario. Through the endorsement, Prodanovich may have goaded A360 into killing the magazine. That would make Prodanovich complicit in Surfer’s murder, whether by will or ignorance.

In an alternate scenario, after being told ahead of the public that he and his staff would be furloughed, Prodanovich may have unilaterally claimed Surfer Magazine’s first-ever political endorsement without A360’s blessing as a last-gasp middle finger to the media company from the magazine as it sank to a new underwater resting place (with the fishes). In the second scenario, Prodanovich cannot be considered complicit in Surfer Magazine’s murder.

Absent of a testifying witness, piecing information together in an effort at solidifying the timeline is the only way to establish Prodanovich’s complicity or non-complicity. As former editor, Todd Prodanovich made the media rounds and discussed the magazine’s demise. In interviews, he remained demure: “It’s just a really funny coincidence.” Funny is, of course, a funny choice of words for a man who held the professional position of editor. If Prodanovich wishes to procure a media position in the future, he had to write off the endorsement and his furlough when interviewed by the New York Times (calling it “funny” does the trick). The intrigue will continue building around this incident because the only way to slow the spread of these conspiracy theories would be Prodanovich releasing information that confirms the suspicions. If there is no story, then all Prodanovich can do is honestly deny prior knowledge of the furloughs and posthumous feedback that his post killed Surfer. Further denial, honest or not, only fuels the intrigue.

The third suspect is the same public that has taken this social cause where all social causes go to appear glamorous: Instagram. As the case plays out online, responses have been a dystopian fever-dream. The public laments the death of an allegedly beloved periodical despite the obvious fact: the public failed to keep Surfer Magazine alive. Monetary support, the simple act of having a subscription or buying magazines, might have kept Surfer Magazine alive. Instead of supporting the magazine while it lived, the public conveys sadness by ordering old issues on eBay, recycling cover shots for personal gain, or showcasing old copies of Surfer Magazines from the garage. Rebranding Surfer as a political martyr is as artificial as Internet avatar Joel Tudor going back to business as usual and posting photos from old magazines after telling Surfer they were kooks for endorsing Biden the day before the magazine died. 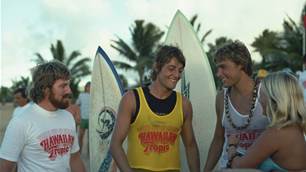