In a world where Donald Trump has the nuclear codes and Scott Morrison shelves coal up his bum it takes a special type of surfer to really standout in the idiot stakes.

Yet these brave dillpots below really stepped up to the plate in recent years. Think of it as an idiot’s guide, written by, and for, idiots.

Shooting yourself in the pier

I’m not sure when, or even where this is, but my lack of research doesn’t take away from the idiocy of the whole debacle. Sure shooting the pier always has an element of danger, but this guy has taken the risk verse reward to an absurd and painful new level. Is he okay? Who cares; he deserves no sympathy.

In a recurring theme it seems the art of “surfing” on rare animals, dead or alive, is a rich and giving vein of idiocy. When you combine that idiocy with social media, an amplifying tool for stupidity, the results can truly amaze. Ricky Rogers, from the Gold Coast, natch, is a prime example. He posted the photo from a trip to Fraser Island a few years ago above captioning it with, "Surfed a tortoise on zee weekend.. gnarly duddddeeeee.” The fact it was a turtle is only the very tip of what is a massive idiot iceberg. The image went viral and the entire world was left in a worse place than when it all started. 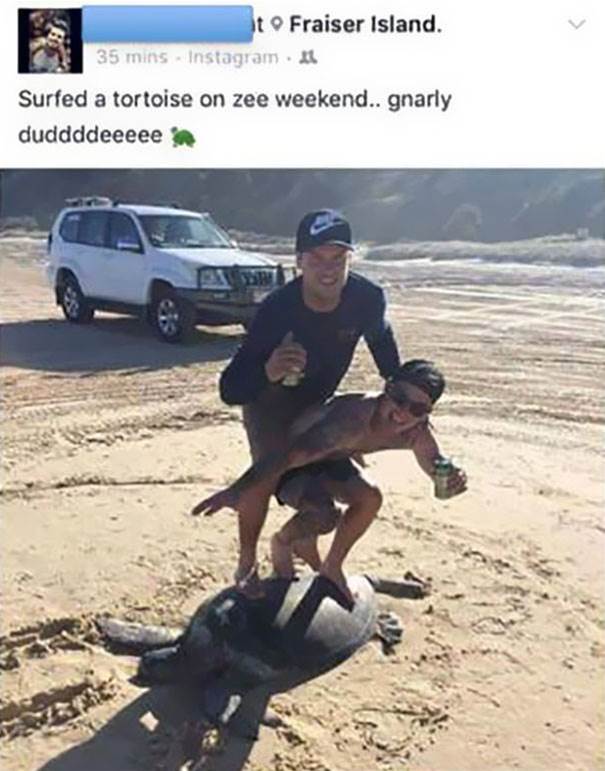 Okay I gotta admit this is right on the cusp where an imbecile meets genius. Let’s call it the Strider Paradox. The idea of a comfortable chair on a SUP is clearly stupid. However to ride a wave, whilst drinking beer, elevates this piece of lunacy into sheer art. This actually might be a game changer. Maybe we are the idiots. That’s rhetorical. Clearly, we are the idiots.

Idiot vs whale vs shark

Shark infested waters is an often an overused term, however not in this case of massive bellendry. “Mum thinks I’m an idiot, dad’s not too proud either,” said 26-year-old Harrison Williams of Perth, natch, after footage of him climbing above the rotting carcass of a dead whale, which was being chomped by half a dozen tiger sharks and a massive great white shark, went viral. “The sharks were too busy chomping on the whale so it wasn’t too bad,” he told reporters.

Jamie O’Brien has made a career out of being a fool. Oh that and surfing Pipe better than anyone else. In no particular order he has ridden a pink softtop board in 20 foot Pipeline and manhandled a 16 foot SUP (with six of his mates) down a humongous wave at Makaha. He has ridden two boards on one wave numerous times, performing a mid-wave board swap at deadly spots such as California’s wedge and again at Pipe. He holds an annual competition in one of the heaviest shorebreak closeouts at Keiki in Hawaii and jumps off huge rocks into the path of rather large waves. He also isn’t very smart.

“Are you fucking kidding me mate?” Says Dean Hazza, we assume to himself, after he jumped in with an eight-foot tiger shark using a bird cage as protection. Of course the Mad Hueys have turned stupidity into a lifestyle choice, but even for their general level of fuckwhittery, this was a low point. Or a high point, depending on your IQ.

Perhaps more uncomfortable than truly stupid, but when Danny Clayton told Kolohe Andino to “Stay the fuck away from my girlfriend,” live on air it didn’t seem to have a whole lot of thinking behind it. If we leave to one side the fact that his “girlfriend” at the time was Zoe Cross who was just 17, as opposed to Clayton’s 29, there was also the small matter of getting sacked. The interview was held during the Hurley Australian Open, which Andino went on to win. We think Kolohe won that exchange.