Igarashi and Marks For The Win at The Corona Open JBay.

It has been a funky kind of prognosis for the Corona Open JBay thus far, with average forecasts daily translating into absolute Supertubes perfection over and over again. This morning was no exception, and Travis Logie had no hesitation in sending the boys out into the water.

Over the last few days Jordy has been one of the early birds, and on one morning he was the only one in the water, willing some waves through on what was a particularly tiny day. Those early morning sessions did nothing to help him against Owen Wright though, as he was outpointed and outplayed.

Jordy was trailing and needed a big score to get into the lead, but Jordy and big scores is a thing at Supertubes, and no one on the beach was very worried. A set loomed, Jordy was slightly out of position and inexplicably chose not to go on what turned out to be the wave of the heat. Owen picked it up further down the line and unleashed with a series of powerful backhand whips onto the bricks for a well-deserved score of 8.3 and the victory.

Talking of Igarashi, he’s going to win this thing. It is very clear that he has the wave totally dialled and that he has excellent equipment underfoot. He exudes confidence every time he paddles out, he is clearly hungry for the win, and he literally can do no wrong. With high heat scores for two rounds in a row now, he is clearly the danger man and he probably has the strongest mental game out there right now. Last year he made it to the semifinals and wants to improve on that third position where he lost to eventual winner Filipe Toledo. “I love this place,” he told me a few days ago. “I feel this wave suits my surfing so much, and I feel such a good connection to the wave and to this place, and in fact to South Africa as a whole.”

He is also not scared of having a crack at huge turns and massive airs when needed. Not that he took to the air much in this heat. Instead he surfed waves with speed, power and flow (did you see what I did there) putting in as many critical turns as is possible with great style – always tight in the pocket, and sometimes airdropping back down. He put down a score of 8.17 and Peterson Crisanto was chasing from that point onwards. He did his best but made a few mistakes and eventually had a 5.50 and a 6.23 on the scorecard before Kanoa went to town on his final wave and surfed it absolutely to pieces, and deserved the 9.07 score and the win.

On the glib conversation of ‘winning the whole thing’ Caroline Marks is definitely going to walk away with the women’s contest. She eliminated defending champion Stephanie Gilmore in their quarter-final encounter with a series of searing backhand hooks and a very critical close-out reentry for a score of 8.17, the best score of the heat. There is much talk about Marks for the win, and for it to be her second win of the year after her classic event win on the Gold Coast earlier this year. 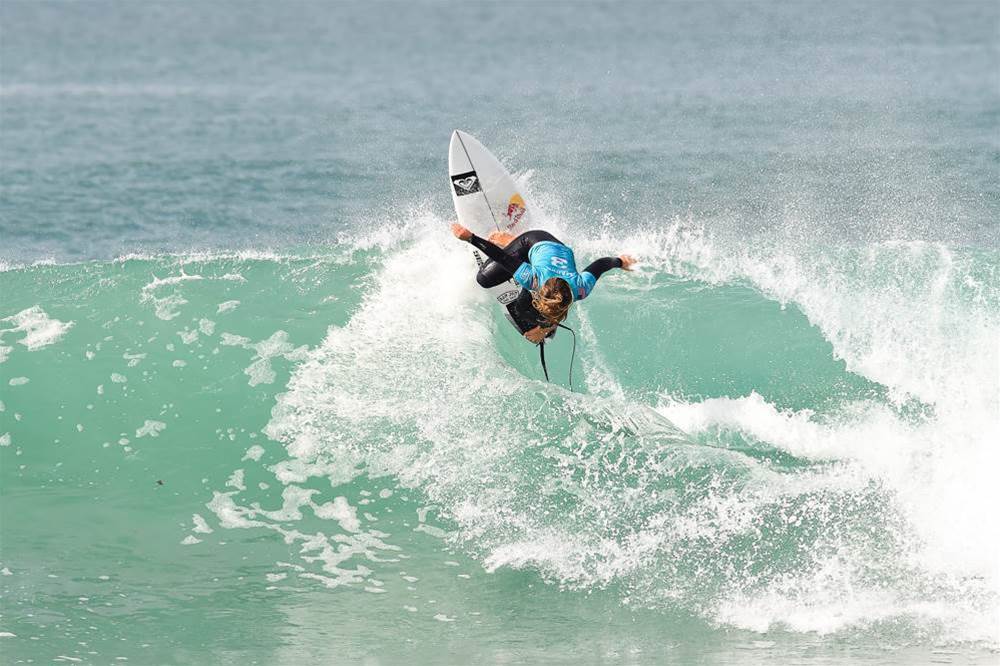 Steph was obviously disappointed with her loss. “I had a great opportunity and I had a great wave and I fell off on that floater,” said Steph about her loss. “My biggest problem was that I couldn't get a finish, the judges really like it when you finish strongly.”

Also obviously disappointed with his loss was Kelly Slater, who went down to Italo Ferreira. The goofy-footer got off to a flying start, with two quick and well-surfed waves under the belt for a combination score of 14.06, before Kelly had anything really on the board. Two failed waves saw the King with a measly 1.40, in a very inconsistent ocean. When Kelly finally got going – on a mid-sized wave – all he could muster was a 5.10 for a couple of decent carves and some nice flow. After that, the sets seemed to be receding, the energy seemed to be dissipating, and the king was looking for a good 9 pointer to get into a comfortable place.

He caught a good wave, and went flying down the line.

It was a blistering wave, from way out back, with a series of searing carves, power gouges and face turns, and it was clearly underscored for a 7.10, but he was back in the game, and within striking distance.

Ferreira came back however, with another insane wave of hooks, floats and blasts for a score of 6.27 and Kelly was chasing desperately with less than 5 minutes to go. He needed 6.97, but it was his earlier mistakes that actually cost him the heat, and he acknowledged that. It was a disappointment. Kelly is very popular in JBay and in South Africa and everyone was hoping for him to bank one more good result on what could possibly be his final tour event at JBay.

If Gabriel Medina does make a miraculous dash for the title then critics will look to three minutes of inspired surfing at J-Bay as perhaps the critical turning point. With step-dad Charlie screaming into the wind and Ryan Callinan well in control, Medina looked gone for all money with five minutes to go. The other surfers will be a little dirty on Ryan for making two major priority mistakes and letting Medina back into the room of title contenders. Watch the final few minutes and witness Callinan’s demonstration of how to snatch defeat from the jaws of victory with bad tactical decisions.

Conditions look epic coming up. It might be a go tomorrow, but more likely Friday. It’ll be an epic finals day either way. Swell, wind, Corona, Champagne and Red Bull, all swishing around together.