Tales of a surfing life from Red Bluff’s oldest inhabitant.

Late Friday afternoon; the setting sun casts a hazy orange glow across the horizon.  Rob is round for dinner.  We’re sitting around a fire, absently gazing into a cast iron pan, where a pizza is slowly cooking.  The first round of red wines are poured.

Rob is the oldest man at Red Bluff.  Aged 71, he’s a scholar in the lifelong study of surfing.  ‘The Professor’ is one of his many nicknames.  He’s an abundant source of surfing wisdom, with a great avidity for storytelling in his dignified English accent.

Surfing is Rob’s life.  He lives in his white Transporter van – one of few worldly possessions – and for the past five years he’s divided his time between Australia’s most eminent surfing locations: Margaret River; Cactus; Red Bluff.

A sailor by occupation, Rob rarely settles in one spot.  This recent stint, he’s been here eight weeks, and tonight, the evening is still early, the mood warm and convivial.  Rob regales us with tales of his youth, pre-surfing.

Rob grew up on the Isle of Wight (an isle in the English Channel), before attending a nautical college on the mainland at the age of fourteen.  Upon graduation he joined the navy, and amongst other destinations, was dispatched to South Africa, where during his time at sea, he developed a mild fascination for surfing. 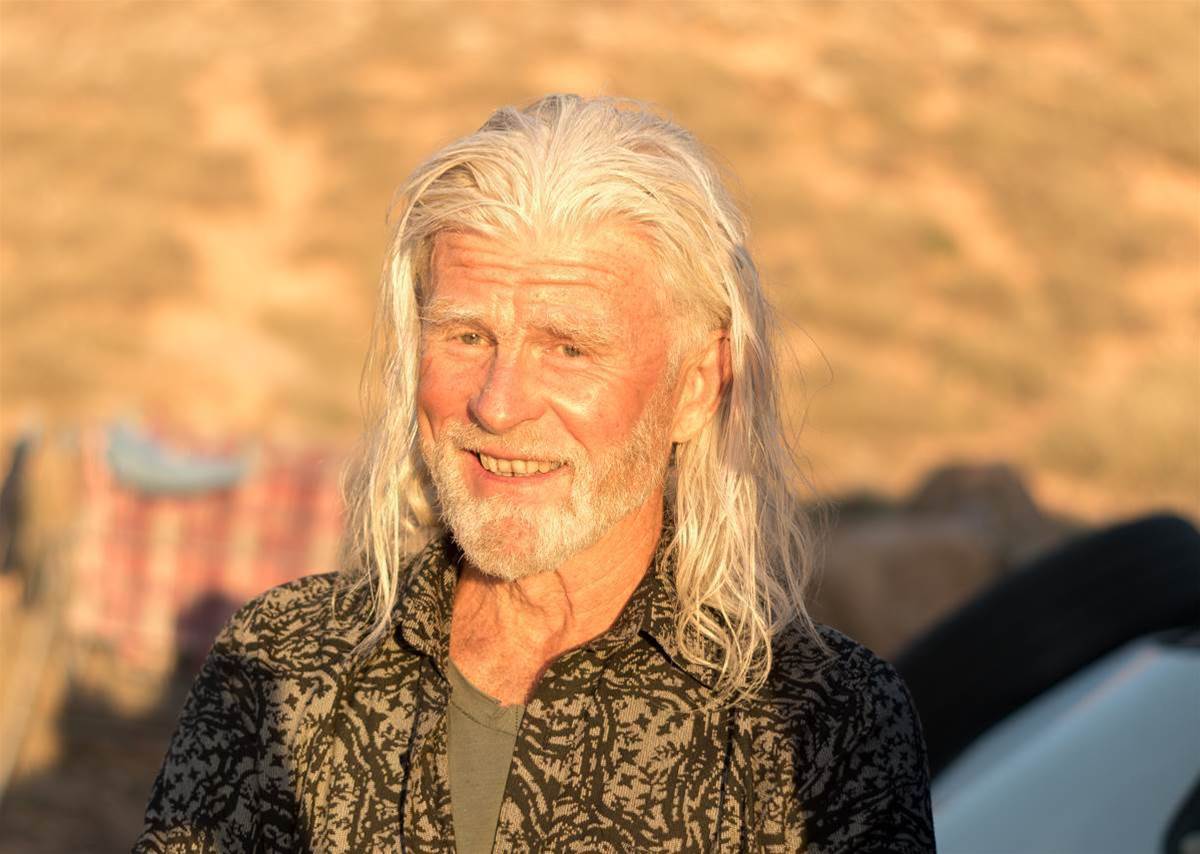 More than a hint of mischief in that smile.

“There were never such thing as YouTube or videos or anything of the sort, but I just had this kind of fixation on surfing,” Rob says.

“I’d never even seen it before, except for this one poster of 40 foot Waimea Bay I had in my bunk.  I was completely hypnotised.  I had to go surfing.”

Rob sought out surfing while on leave on the South African mainland.  Following his revolutionary discovery, he promptly relieved himself of his services and embarked on a lifelong affair with surfing; moving to South Africa and shaping surfboards to sustain himself.

The sun sets.  The sky glows a deep orange, its colour matching the flickering flames in the fire pit.  The first of three pizzas is devoured and the wine begins to flow.  A 4L cask of DeBrillo’s Premium Cab Merlot lubricates Rob’s tongue.  His tales become more rambunctious, more outrageous.

Rob spent the best part of the 60s in California, before returning to his motherland, where life took a turn for the worse.  Following a failed business venture, Rob started smuggling drugs to pay off his debts.  Using his ill-gotten gains, he broke even, bought a house, and sailed around the world in search of waves.

Eventually, Rob was apprehended while transporting cocaine from Central America back to the UK, and subsequently sentenced to six years in prison.  While surfing folklore of this era comprises the schemes of other such wayfaring smugglers – Mike Boyum, Ricky Rasmussen – in Rob’s opinion, it wasn’t entirely typical of the time.

“Surfers, other than being with a beautiful woman and having lots of babies, want to go surfing.  It’s not exactly a career that makes you lots of money - unless you’re Kelly Slater or John John Florence - and so naturally, I sought alternative financial arrangements,” he says.

“I’m sure there were lots of other guys doing it, but I certainly didn’t hear of it and I wasn’t aware that it was a part of the culture, no.”

Rob obliges a third glass of wine.  Glass number three! Rob really starts to spill the beans.  He lets us in on a bizarre secret, when a few days ago he discovered five long-lost tabs of acid in the back pocket of his shorts.  Curious as to their potency, he promptly wolfed three and began watching Predator II on his laptop.

“I’m not sure what I was thinking,” he says.

“I wasn’t even sure if they would work.  They’d been through the wash multiple times, but I tell you what, they worked alright!”

The night grows old and the fire dissipates down to white ash.  With little more than a parting farewell, Rob ups and heads for horizon.  A few days later and he’s gone; sidelined from the surf by a dicky knee.  By now, he’s probably on his way back down to Margaret River.  After that, who knows?

But before Rob leaves, he imparts with me a gift.  It’s a laminated piece of A4 paper emblazoned with idyllic images on the Bluff, and atop the sheet is a legend, a classic Joseph Campbell quote.

It reads: “Where you stumble & fall, there you will find your treasure.”