At last the beast is out of the cage

Teahupoo doesn’t always show up for the WSL, but maybe it only takes one monumental day every few years to justify its inclusion on the tour. The hissing, spitting, awe-inspiring beast was definitely out of the cage today and consequently it was probably the most non-productive day of work of the year for surfers around the world. Most of us were hunched over a screen enraptured by muscular folds in the ocean and those who dared to wrestle with them. Hell, even those who have never seen surfing before can relate to Teahupoo. It was the sort of day where you could imagine Billabong executives kicking stones in the company car park after relinquishing their sponsorship of the event. Meanwhile the Hurley bosses were high-fiving each other in the boardroom as their event owned eyeballs all over the globe. No hyperbole or combination of adjectives will do justice to what transpired at Teahupoo for the rounds of 32 and 16. The wave's raw power communicates something on a much more primal level than language, but perhaps it’s worth reflecting on a few performances from what was indisputably one of pro surfing’s most glorious days.

Kolohe Andino gets KO’d by Kauli Vaast
For the entire year Kolohe has been the overachieving underdog in the world title race. Teahupoo was his first opportunity to be cloaked in the coveted yellow jersey and today he discovered that leading, and all the loneliness that comes with it, can be much harder than chasing someone down. If you haven’t been out in front before, it can be a strange place to play in. Dressed in yellow, Kolohe could no longer rely on the grudge that drives the underdog. Instead the hunter became the hunted as 17-year-old Kauli Vaast paddled out with a point to prove. In the lead up to the event it seemed like more of the wildcard hype centred around Matahi Drollet, but Matahi, a big barrel specialist, couldn’t survive the small wave hustle against the well-tuned pros and never got a shot at real-deal Chopes in a singlet. Meanwhile Kauli, resplendent in his bright pink helmet, made the most of his opportunity to shine on a world stage. Kolohe had a suite of solid scores but as Brother stayed busy, Kauli seemed to sense that the wave he knows so well had more to offer. The Tahitian got busy towards the end of the heat and with minimal time remaining snuffed out a long drainer under Kolohe’s priority. The double pump in the deep barrel combined with dramatic spitting exit was enough for the judges to deliver a 7.73 and the lead. Andino had the wave to snatch victory back but didn’t exit in a clutch moment. Kolohe’s fleeting dance in the yellow fleece was over after Filipe surprised everyone, including himself it seemed, to advance past Jesse Mendes and claim the number one slot.

Adriano De Souza is still The Captain of team Brazil

De Souza came into the heat as the ageing Brazilian, doing his best to hang in there amongst a voracious bunch of younger, fellow countrymen that he paved the way for. Italo is a prime example of the new Brazilian frontline and is also a definite contender for the world title. Adriano is not known as an A-grade backside tube-rider. Italo hasn’t thrived at this level but the consensus amongst most of his peers is that he has the courage and the ability to perform in any waves. Both surfers endured heavy wipe-outs, but Adriano ultimately claimed the heat with a double-section grinder that required him to evade a guillotine lip as he skated across the flats to safety. It was a clear reminder from Adriano, who maintained his momentum and muscled past Joan Duru for a quarter-finals birth, that he is far from done with his career.

Even with the added protection of his white, jockey helmet, some part of Owen Wright must fear for his well-being. He may have recovered from the skull-rattling wipeout he received at Pipeline a few years back, but such incidents leave their psychological scars. Despite past traumas Owen surfed today’s fierce Teahupoo conditions with supreme confidence and obvious precision.

Commentators suggested his drops never looked that critical, but Owen’s superior paddling speed and wave selection meant he could make early entries and concentrate on what really matters – riding deep in the barrel. Owen nudged out Soli Bailey in his first heat and then needed every neuron of his tube nous to eclipse Michel Bourez, who was desperate for a good result in home waters. It was one of those heats where the waves got exponentially heavier as time went on. Owen’s heat total against Soli was a meagre 12.73. Against Michel he needed a more robust 18.5 total and the big Tahitian was only O.4 behind. The second heat win proved emphatically that Owen can find the big scores that will be required to win the event. On paper he should beat Jadson Andre in the first quarter to keep Australian hopes alive. Reassuringly Owen suggested his preparation for finals day would involve playing with his son Vali in the afternoon. Nothing keeps you sharper than chasing a grommet around an island.

Jack Freestone puts Kelly out of ‘The Picture’

Every surfer, irrespective of their ranking, has a moment when all the planets align and the requirements of the task come into perfect focus. For Jack Freestone that moment happened against Kelly Slater in the final heat of the round of 32. While Freestone has struggled with confidence and form for much of the year, against Kelly everything clicked. For fans it was a bittersweet moment. It was fantastic to see Freestone in the zone, posting a 17.17 heat total, but it was also tragic to see Kelly toppled in the event so many fans wanted to see him do well in. Post heat Kelly conceded that the upset loss may have destroyed any chance he had at the world title. “That probably just takes me out of the picture… I just don’t think there’s enough points out there for me to get into the world title race in time for the Pipe Masters.” Was this Kelly signing off ?

Teahupoo at six-to-eight foot narrows the focus to a singular skill – riding the barrel. The entire judging criteria is sub-divided into the technical aspects of tube riding. Judges will scrutinise depth of take-off, proximity to the foam ball, size of the tube, thickness of the wave and degree of difficulty in the drop. However, the one factor that is blatantly obvious to viewers at home and in the event is how deep you were in the pit. All those minor technical elements above are micro-skills, which are developed with the sole focus of riding deeper. As Chopes is more perfect and predictable than Pipe it demands that competitors push themselves even further inside on take-off. Griffin Colapinto and Ryan Callinan went wave for wave, both claiming scoring rides in the same set on two occasions. This only served to amplify the subtle differences. As Ross Williams put it, Teahupoo “puts an extreme microscope on how you surf… six feet back makes all the difference…” Colapinto was always that little bit steeper and deeper than his goofy counterpart in a toe-to-toe heat. Post heat he put it on par with his quarter final at Kirra in 2018 where he scored a perfect ten.

Medina was a like a well-drilled actor who nails every line in the script he’s been given. Everyone called that he would make a charge for the world title in this event and when the west swell showed up he didn’t disappoint. He warmed up against Zeke Lau with a pair of sevens and then went to another place against an in form Colapinto. It was Gabriel who helped the judges get over their phobia of double figures and score the first ten of the year for a wave that made him look like a toy gift exploding out of a Christmas bon bon.

With a 9.23 to back up the ten, his 19.23 total entered the ledger as one of the all time great Teahupoo heats. “This is what I live for,” he told Rosy after the heat before switching the focus to the thrilling match-up between himself and Jeremy Flores in the quarter-finals.

Caio Ibelli: Don’t You Forget About Me

Since he returned from injury there has been something of a cloud over Caio Ibelli, but today he twice proved his worth as a WCT surfer. Medina may have dazzled us with his ten-point ride and 19.23 heat total against Griffin Colapinto, but Gabby only managed a 14.03 heat total in his round of 32 heat. Caio was the highest scoring surfer of the day when you combine both heats surfed, with an 18.64 against Jack Freestone in the round of 16 and a 17.73 against an unlucky Conner Coffin (he would have won other heats) in the round of 32. Nobody worked harder for their quarter finals birth than Caio, who had to overcome high-scoring opposition on both occasions. Ibelli is not afraid to huck under the heaviest sections and will ride hands free if he feels like it will deliver him more drive or points. The quarter-final match-up with Seth Moniz should be a doozey.

After a day that in hindsight seems to blur into one long, thick, spitting barrel, the only problem now is producing a finals round that somehow goes one better.

Either way, Teahupoo has roared loud enough to echo for a few more years yet. 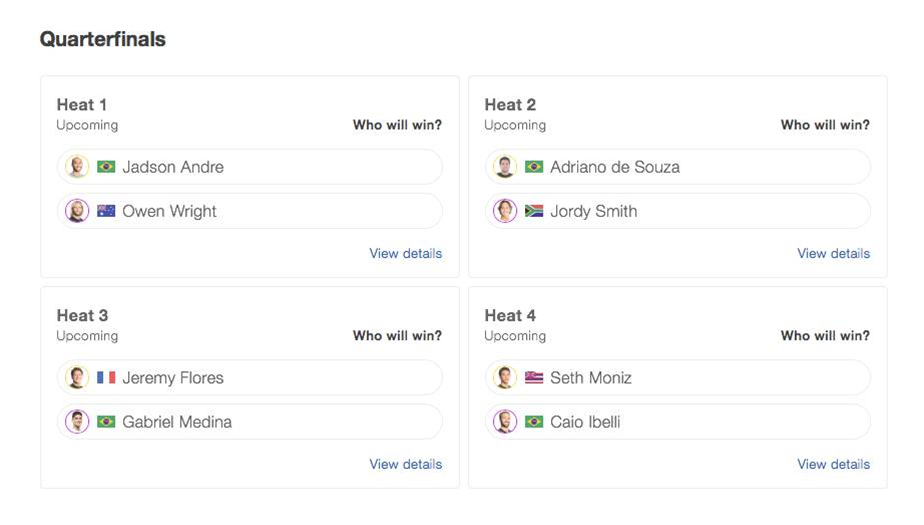