The tubes of Teahupoo weren’t the only things contorting on day one of the Billabong pro Tahiti. There were tongues twisting into some remarkable shapes in the commentary booth too, as the team attempted to put into words one of the greatest days of competitive surfing ever witnessed. It’s hard to blame them though, commentating is a tough gig and the waves and surfing were enough to make anyone delirious. Here are the highlights.

“A bit of spring break here in the flotilla. All the fans coming out to watch the best sporting event in the world – I call it the mega-bowl!” – Pat Parnell

“And he’s out!” – Pat Parnell at the end of every single wave

“Nathan Hedge building on his 9.27. This is going to be a decent score to stack onto that.” – It was a 2-point ride Pat!

“The red singlet’s are prevailing and there’s no stranger to that.” – Pottz

“When you have this much swell it makes things a little easier or a little harder.” – Pat Parnell

"That’s exactly what the doctor ordered for Joel Parkinson, he needed Mother Nature to co-operate … and it did!” – Ross Williams, not one for cliché.

“Where do you want to be in the lineup out here Pottz?” – Joe Turpel

“I want to be in the boat watching Joe!” – Pottz (Cue sitcom canned laughter)

“That was a good one from Taj.” –  Pottz absolutely losing it after Taj Burrow dropped into one of the craziest waves of the day that wielded more spit than a Llama with a head cold. Calm down Pottz!

“You know the waves out there it’s hard to cooperate you need those bigger ones with the throat on ‘em, these guys are having a battle out there you can tell they’re just getting hammered, these guys went through carnage already through this heat nobody's got really a big score on the board and it is just going off out there you’re gonna see some more action for sure!” –  Strider “streamofconciousness” Wasilewski 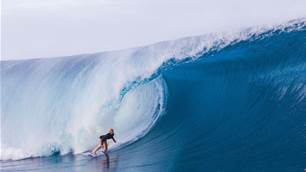