Barrel Spelunkers and Corrupt Aerialists are the winners on a day when risks were rewarded.

There are many pseudonyms being tossed around for the WSL Ranch. Some of the pros call it ‘The Pond’, while others have referred to it as The ‘ Wave Paddock’, given its agricultural origins and shape. This morning as I grabbed a coffee, a surfer mate, fresh from an early in grizzly onshore conditions, said, “I thought you’d be at home watching the fish tank.” I had been and didn’t mind admitting I was heading back to watch more artificially-groomed perfection because the biggest fish were about to jump. Below are a few thoughts on the back end of day two at the Tank.

Kolohe is a Clear Contender

If insta clips are anything to go by, Kolohe has probably done more hot laps at the Ranch than most surfers on tour. His experience was apparent from the moment he made his first, flee-footed, backside bottom turn. Kolohe was all rhythm and precision; a wave dancer who’d had time to practise and visualise the choreography of his routine. He obviously understood the nuances of the different sections­ – the subtle shifts in speed and power, and where to take risks.

The backside reverse midway through his left was an exclamation point; a seamless disco-spin executed with maximum speed and flow. On his frontside scoring wave Kolohe doubled up on the reverse to cap a commanding performance and establish himself as a clear contender.

The Dummy Spit we all Felt

Kelly Slater probably didn’t have Willian Cardoso in mind when he dreamed up the wave pool. It was like watching a panda bear cram into a rabbit hole as big Bill struggled to fit his frame into the tube. Failing to complete any of his rides, Will made the pool look like a very lonely place and embodied the frustration one must feel when falling on a perfect wave with hundreds on the sidelines, thousands on the net and your career on the line. After his last ride Will bashed his board and then got dobbed in by Barton Lynch for throwing more punches at the ski mat. Given the sporting arena setting you half expected an umpire to come over the loud speaker and announce a board abuse fine. However, given the context you couldn’t blame Will, and his response summed up how many of us might feel if we blew a wave at the pool.

Kelly Slater could be loosely credited for the revitalisation of Jordy Smith. Riding an electric green KS design Sci-Fi at Kelly’s wave pool, Jordy Smith rediscovered the art of flight and the boldness that defined his early career. On his opening left Jordy brashly dismissed the easy money on the end tube and laid down a Rodeo flip. The judges rewarded the risk. On his first right Jordy again eschewed the tube and went sky-walking on the end section, landing a heavy-footed alley-oop that had South African fans letting the Lekker Bru’s fly. Jordy was refreshingly frank in his post-heat interview, pointing out that he made good use of a format that allowed him to analyse a leaderboard and the scoring.“I looked at the scoreboard and to get above an eight you needed to do an air ...”  Owen would prove him wrong on his first wave. 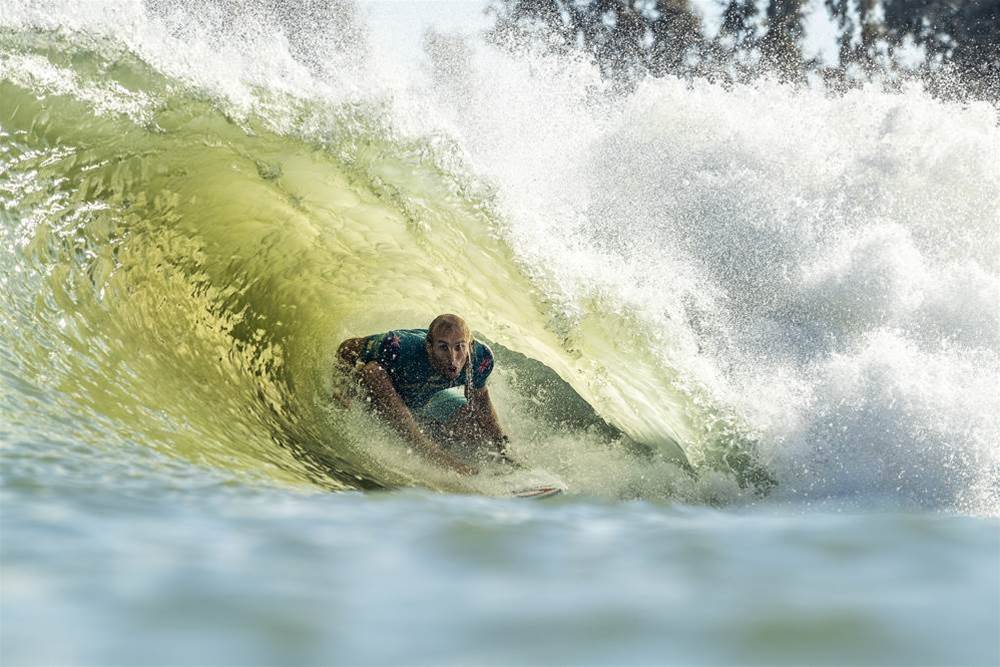 Riding Wilko’s board model, Owen rediscovered a looseness and freedom we haven’t seen in his surfing for some time.The key to his 8.13 on the left was tail drift and fin release.

Owen wasn’t going huge, but every single turn had an element of risk and a point of difference, and when you put six or seven of those together it adds up. On the right, Owen, the tallest surfer on tour at 6’3”, looked like he’d been training with a troupe of contortionists in the lead up to the Surf Ranch Pro. As he compressed and rode ultra-deep he gave Pete and Joe a chance to use their favourite new term for the barrel – ‘spelunking’ as in cave exploring. ­

Slotted in third at the end of day two, Owen will need to find one more gear (a take-off gear) if his to defeat Medina in full flight.

Julian to Lift, while Toledo may Stumble.

Julian looked solid without being astounding, to surf his way into a number six slot. Wilson hasn’t been to the pool before and still looked like he was figuring out the wave on his opening rides. Julian’s advantage is his capacity to score good points with conventional turns because he combines flawless technique with power. However, if he is going to rumble with Medina and claim crucial world title points on the Jeep Leaderboard, he needs to literally ramp up his air game. Jules’s alley-oop on his scoring right was impressive but not in the same league as Toledo’s alley-oop or Medina’s corrupt flip. Now is the time for Julian to treat Toledo and Medina as aerial contemporaries, surfers he must go wave for wave with. There is however a chance that Toledo will falter. He has his best results when he catches twenty waves, building momentum and confidence with every ride and rejoicing in the fact that he can fall and go hard again. The pool format does not allow him to be so indulgent and by his own admission he feels the pressure. He more or less farmed his first three rides, but got out of gaol with the giant alley-oop on his final right-hander. Today he watched Medina and felt the impact of his imperious performance. Tomorrow Toledo should be seeded before Gabby and won’t have to watch Gabby and risk being psyched out. 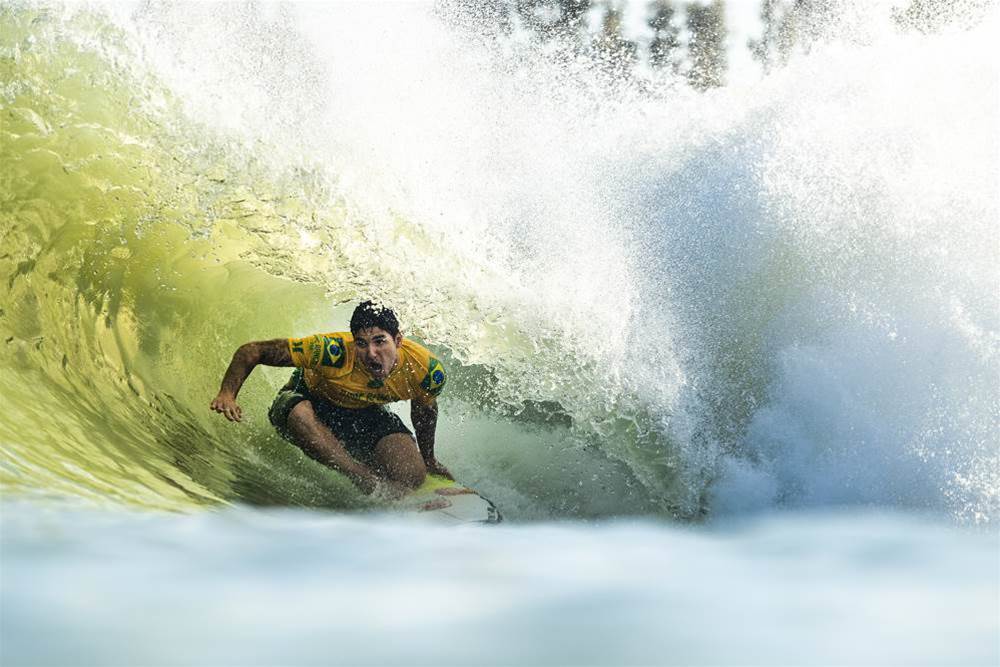 Medina is considered by his peers to be one of the best tube riders at the Ranch. WSL/Cestari

On form Gabriel Medina is the shark in the fish tank who will gobble up everyone else, including skinny little Filipe.

On the wave face Medina has the capacity to swing through heavy gouges and still maintain speed. Others who attempt major moves often get bucked­ – see Michel Bourez. The most frightening aspect (for competitors) of Gabbyy’s first left was arguably how easily he accelerated around the section after he looked in danger of being left behind. One pump from those thunder thighs and he has all the pace he needs. The deftly executed, corrupt flip on the end section demonstrated he has an arsenal of technically difficult aerial manoeuvres at his disposal and the confidence to dodge the barrel and go for them when he sees fit.

On his backside Gabriel backed up the suggestion by Slater and others that he is also probably the best tube rider at the Ranch. Medina is not a small surfer, but he had little difficulty manipulating speed and compressing his frame for maximum depth and tube time. He currently looks like the most complete surfer in the pond, even if he doesn’t think so. “I’m not the favourite, Filipe is,” he deflected when Rosie asked how he felt about being the front-runner. As Pete Mel astutely indicated, this was a tactic by Gabriel to take the weight of expectation off his own shoulders. Toledo at full steam can topple Gabriel, but one senses that Medina is better equipped psychologically for the high pressure format that does not allow you to just wipe off a wave and go catch another one.

As it stands Medina is almost a full two points clear of Kanoa Igarashi in second. He is also the only surfer to post two scores in the excellent range, relying on different boards for the left and the right to do so.

Unexpected Features of The Format and Final Rides

I, like many, was sceptical of a format that does not pit one surfer directly against another in a man on man/woman on woman format. I’d still like to see a wave pool event tried with the conventional approach, but there was an interesting dimension to the seeding because you were able to watch the world title contenders surf very shortly after one another. They also watched each other and you could definitely sense the dramatic tension. Did Filipe crumble because he watched Gabby do so well? Does Gabby thrive on the direct confrontation when there is a bigger agenda than just the contest at play?

For the top seeds, tomorrow’s final, round one rides will be all about doing enough to preserve a slot in the top eight and therefore guarantee a finals birth. It’s likely that some of the top seeds will get to surf knowing they are already through. Meanwhile the pressure is now on the lower seeds to really make a dash for the final octet.

By day’s end Kelly Slater and Griffin Colapinto had been nudged out of the top eight. It would be great to see Kelly make the eight and Colapinto certainly has the firepower. From the backmarkers almost anyone is capable of claiming a top slot, but on paper three surfers are particularly well placed as they hold high scoring single rides and only need one more good wave to rattle cages ­– Seabass has an 8.67 while Yago Dora and Connor O’Leary are both holding on to a 7.73. Many of the surfers in the top eight are currently carrying single scores much lower than that. One thing is certain, there will be no second chances after the next two rides.

Tomorrow could be a game of shuffle the leader-board. Surfers will need to have a clear picture of exactly what they need to do and quickly grasp the arithmetic and performance requirements of the new event, but right now Gabriel Medina is definitely the Great White in the fish tank. 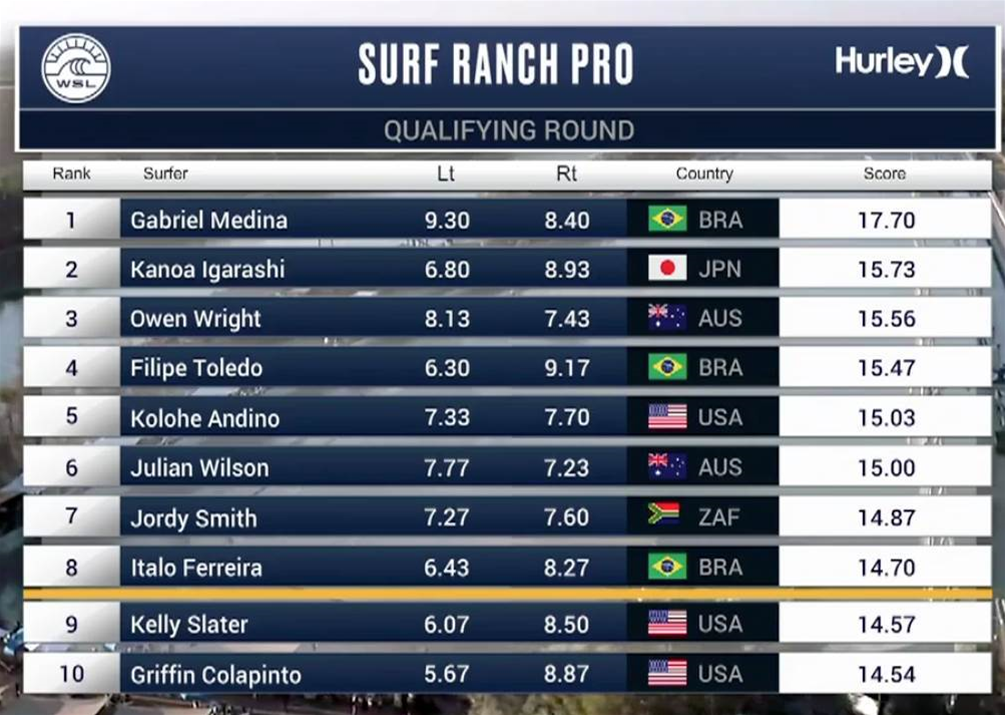 The standings after day two.