Hugo Vau caught the biggest wave ever at Nazaré, but does the video evidence prove it?

"If a tree falls in a forest and no one is around to hear it, does it make a sound?" That was a question posed by the Anglo-Irish philosopher and layback specialist Bishop George Berkeley. It is a philosophical thought experiment that raises questions regarding observation and perception that has been keeping philosophers awake for over 150 years.

In Nazaré last week, Hugo Vau added a modern surfing twist to this philosophical question when he was towed into what he, and many other Nazaré veterans, consider to be the biggest wave ever ridden at the Portuguese beachbreak behemoth. And if we assume that nowhere has bigger waves than Nazaré, it could well have been the biggest wave ever ridden.

The problem for Vau, and his partner Alex Botelho, was that the wave was ridden at Nazare’s furthest peak outside, in the last light of day, in howling winds and all backlit by a burning sunset. There is only one known video of the wave and in that footage Vau is almost unidentifiable. There is no doubt he has ridden the wave, but the scale and detail of it is indecipherable. This is where the modern philosophical twist comes in; if a wave is ridden, but not filmed, did it really happen? 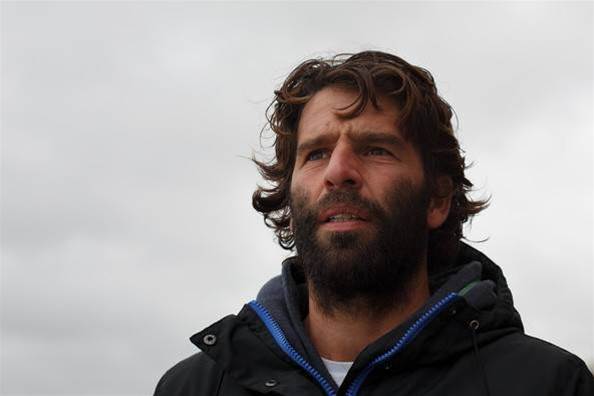 For Vau, who along with Garrett McNamara and Andrew Cotton, pioneered the break, the question is irrelevant. He knows exactly what went down that evening. “The tide dropped and the swell had picked up and the location we call Big Mamas, the right way out the back in the front of the lighthouse, started to break,” he tells Tracks. “For a wave to break at Big Mamas it has to be huge. The only wave I have ever seen like this one was about four years ago. This one was the same. When I let go of the rope, it was easily the biggest wave I’d seen out there and all the other surfers who were in the water agreed.”

Botelho, the closest witness, corroborates his team mates’s version. “It was also the biggest wave I’d seen out there. It was scary watching it though. Hugo had a black wetsuit and he completely disappeared when the wave went hollow as the wave turned into a big black hole.”

Vau eventually rode out of the wave safely. Returning to shore elated a check of the video and images showed, well, nothing much at all. He may have just ridden the biggest wave ever at Nazaré, and by extension, in the history of the sport, but there’s wasn’t a shred of evidence to prove it.

Same swell, but a little cleaner. Watch out for Ross Clarke-Jones on the rights.

Yet Vau is, appropriately, all rather philosophical about it. “Look, maybe that wave wasn’t supposed to be captured, maybe it was just for us,” he says. “In the old days you would pass on your experiences and that’s how stories were shared and kept alive. Now if you don’t have a picture, it doesn’t count.”

What does count though is the experience he shared with his friend. “I know I have this crazy teammate Alex who I have known since he was a 17-year-old kid. He’s a good soul who is such a charger and who is so committed. So when you connect friendship with a pure love of surf, it’s a real and simple joy. It all happened in a peaceful way; there was friendship, happiness, nature, waves and surf. It was the wave of my life. What else can I say?”

Nothing really. All that attitude deserves is the highest of praise and the loudest of applause. If you could all join in with some one hand clapping...