The elimination round claims some unfortunate scalps.

If it’s ever going to dawn on the WSL that there are too many surfers on tour, then after yesterday’s diabolical seeding round and today’s elimination round at Teahupoo is as good a time as any.

The number of surfers in each event simply doesn’t compute with nature. A swell event with unrealistic stamina is needed for it to work. Not only to keep viewers interested in the event, but also to ensure that fluky below par conditions don’t kill what could be an exciting narrative.

Case in point would be the loss of wildcards Matahi Drollet and Tyler Newton from the Tahiti Pro during today’s elimination round. Two surfers who could’ve done real damage and created drama had they been given the opportunity to surf at legitimate Teahupoo. Correct me if I’m wrong, but is that not the very reason why Matahi was selected and that Tyler won his way through the trials in solid waves?

Instead we lose them in poor conditions and their chance to create the impact they were chosen to create goes begging.

Losing a once-in-a-lifetime chance to do their thing at solid Teahupoo in front of a global audience must be hard to swallow for Matahi and Tyler, and it’s a missed opportunity for the WSL to showcase two heavy water specialists in their event.

In other news from this morning’s competition we also said goodbye to Frederico Morais and Michael Rodrigues, Jordy and Ryan Callinan saved their skins, and the standout of the four elimination heats was Conner Coffin, who threaded a bunch of what must be said were dreamy tropical tubes that any man would kill to have been inside of.

However, it’s still just not the real Teahupoo we’ve all been baying for. That comes on Tuesday/Wednesday with a possible run tomorrow. 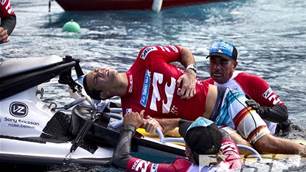 Waves that Mattered: Jordy Goes Down