This cyclone is messing with our minds.

The Kübler-Ross model, as you probably well know, postulates the progression of emotional states experienced by terminally ill patients after diagnosis. Now more popularly known as the five stages of grief, the theory is used to cover everything from depression, to break ups to overcooking an egg. It is thought that by recognising the five stages, which chronologically are denial, anger, bargaining, depression and acceptance, we can better deal with grief.

It sprang to mind when our WhatsApp group, with members posting from Tweed Heads to Caves Beach, began swirling into cyclonic mode with the arrival if Oma. Denial was an initial, protective response. Surfers have been hurt before by those circular wheels of pleasure and pain located high up in the Coral Sea. Who hasn’t tracked one for days only to see it veer east into the Pacific taking their high energy swells way to a distant atoll? Others had swerved west striking the Queensland coast with all their swell potential transformed into endless sheets of rain and ocean tearing winds. Some simply downgraded, like a credit rating, into something formless and depressing.

Oma, oh our sweet Oma, was different. It had idled off Vanuatu for an age, biding its time and building steam. Once confirmed, the denial stage was left behind. “Indeed, no matter which model or model-run you look at, the system looms as an historical swell-producer; right up there with other tropical cyclone driven events of the last decade.” Wrote one surf forecaster.

Will we see waves like we did during cyclone Gita?

The WhatsApp started pinging like a Saturday night. Previous cyclones were recalled with fervour. Iggy, Yasi, Olga, Wati, Harriet, Abigail, Vance and Nina were just a few mentioned. Each came with increasingly taller tales of epic sessions at Angourie and Kirra, Redhead and Tuncurry, Crescent and Valla. The forecasts however were a moving beast, with changes every hour. It was 6 feet at 15 seconds from the northeast then swerving 11 seconds from the south. Plans were being made for right-hand points that face north and secret sandbars that are offshore in a nor-easter. Often on the same day.

“My prediction is $£$*#,” came in from Dangles, based somewhere north of Foster. “In front of the caravan park. There’s nearly three months of sand there packed in tight. Watched some Youtube footage the other day and my balls went ham. I had the best surf of my life there with Wati.”

Of course as of right now, Oma hasn’t really delivered. It’s tracking southwest and could well slam into the Gold Coast. This would mean its category 2 wind gusts of up to 130 kilometres per hour aligned with big tides would hit an overdeveloped and under-protected coast. Waves could be the least of our worries. Kirra might be breaking, but who cares if mass destruction is the result?

Now you might think it was a little early for the anger stage. After all everything from landfall to a cyclone sending large southerly swell is still on the table for today and the weekend, but the original hype had played its part. Oma was messing with surfer’s minds.

Yet Oma is still sitting up there, and only she will choose her own path. Anything, and everything, is still possible. And we still have bargaining, depression and acceptance to go through. This cyclone grief ain’t done yet. 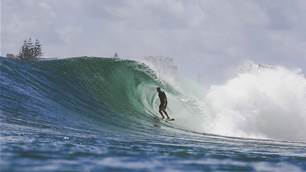 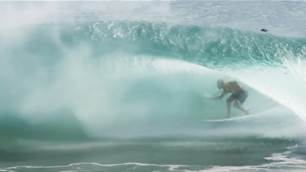