Playing favourites in round one of the Quiksilver Pro

Four-time world champion, Mark Richards, was front row at Snapper Rocks today, watching the heats with all the enthusiasm of a class-dodging school kid. MR loves a contest and was happy to have sand between his toes alongside good mate, Mark Plater, (Mad Dog surfboards) and deliver an almost blow-by-blow running commentary on each wave ridden. 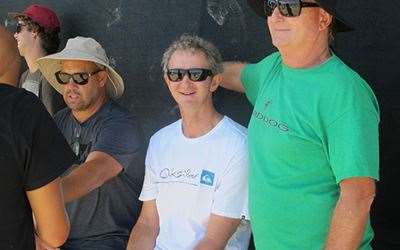 Amongst the many pearls of wisdom tossed aside by MR, as he took refuge in the shade cast by the giant awning of the ‘Taj Mahal’, was an indication of how important the first event of the calendar is. “It can really set the tone for the rest of the year,” suggested MR sagely. Case in point was Gabriel Medina who won at Snapper last year and went on to win the world title. The event is a long way from run and won but round one definitely featured a few favorite moments.

It’s always news when Kelly gets beaten. Freddie was one of MR’s favourite surfers of the first round and with good reason. His switch-blade snaps were precise and rhythmical and there were no sticky bits in between turns. The smaller Snapper conditions can make it easier for the backside surfers to repeatedly go top to bottom and Freddie got the best of the racy, little lime sliders that rolled through this morning. In simple terms this heat was a case of he who catches the best waves will win. Kelly found his groove too late, on his shorter, wider boards, which look great through the turns but lacked a little down the line flow. 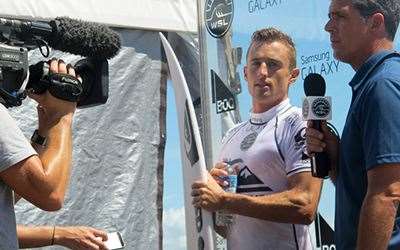 Matched up against Mick Fanning and in form trials winner, Jack Freestone, Matt was in real danger of being monstered by a couple of Snapper specialists and a vocal crowd that loves nothing more than a local victory. However, Banting held his nerve and garnished his spindley-limbed, whammy-arm snaps with a couple of air reverses down the line to claim a confidence-building victory. Watch the way he consistently jams the back foot on the tail during a regulation snap so that the board throws a pretty fan of spray high into the sky. It’s a subtle feature of his surfing, which delivers a point of difference, creates at least the illusion of power and ensures the judges have something to look at. Coming off the back of early round losses in QS events at Manly and Newcastle, Matty admitted the nerves were intense in his first heat as a fully-fledged WCT member. However, he proved that he is capable of handling the pressure against probably the toughest competitor in pro surfing, Mick Fanning. Not even a well-aimed tranquilizer dart would quell the intensity that Mick Fanning radiates going into an event at present, and it should be noted that  despite losing, he still secured the highest wave score of the day, a 9.73. Matt had lost to Mick on all prior encounters so it’s a massive result for him in the scheme of things. The knowledge that he can beat the best on the biggest stage is invaluable. “You’ve got to back yourself,” insists Matt, “Not over-think it and just trust your instincts on the wave.” Let’s hope the formula works for Matt and he fares better than last year’s Aussie rookies, Mitch Crews and Dion Atkinson, who were both relegated to second division after their first lap.

Jordy is having a good time.

Despite having the best job in the world, Pro surfers, can at times fail to see the value of their privileged existence and slip into a state of strangling negativity. “Waves are shit.” “Board’s no good.” “It’s too crowded,” etc etc. However, the surfer who is having fun is always a dangerous competitor. Jordy Smith is one who seems to have found his mojo.

“I caught a couple of the best waves I’ve ever had out here in that last swell,” suggested Jordy with a big grin, while free surfing last night. It was two foot, onshore and crumbly but that didn’t stop Jordy explaining how much fun he was having. “I love it out here when you cut back and just see it start to scoop out down the line.”

There are many parts to the Jordy whole. He is indisputably a power surfer, a stylish carver and an aerial aficionado. The challenge for him is to have all dimensions of his surfing working in symphony.

In his free surfing the signs were good as he drifted effortlessly through drawn out rail turns and launched at will. His heat victory today seemed to support the suggestion he has found both his form and the optimal headspace for competition. Jordy knows he should be a world title contender based on ability and his leagues of loyal fans are hoping he doesn’t go the way of Taj.

I’ve got a much a better attitude this time around,” suggested a bearded and buff looking Dusty Payne, who won the honesty award for the day in addition to the prize for the best power hacks. 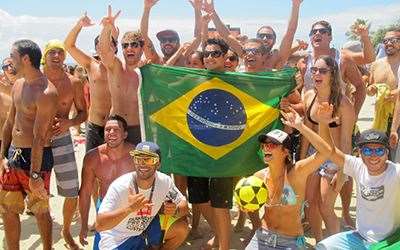 Brazilian fever on the sand at Snapper today.

"I think everything came too easy the first time and I took it for granted … This sport is so competitive, you can’t afford not to be grateful. Now I’m just stoked to be back here surfing at Snapper.”

With his improved self-awareness and physical strength, Dusty attacked the lip with more ferocity than probably any other surfer and was duly rewarded with the second-highest wave score of the day. “I think I was a little flicky when I first showed up on tour but I’ve worked on that and now I probably need to go back and work on my airs again,” indicated Dusty. For a bulked up Dusty the only danger now seems to be a tendency to sometimes overcook his turns, but if he does find his range on rail and in the air he will be lethal.

Watch all the heats on demand here.