Putting the latest phase of Kelly’s lengthy career in context.

I was off him. Seemed like that bony little hoof was fine while he was parading around his wave pool, getting faux-shacked and playing Captain America, but lo and behold, Rio rolls around and it’s still too sore to surf. Suddenly I’m scrambling to update my fantasy team. Suddenly I’m calling bullshit on the greatest surfer ever.

Then I throw on A Brokedown Melody for the first time in a decade and who’s there gliding across the screen? On a board at least four inches longer than anything he currently rides and with 100% more hair? Roberto Kelly Jimbo Slater—and by God, was he ripping! Best ever type stuff. Hanging out with Mark Cunningham and talking all kinds of soully jazz about waves and the ocean and other things that no longer seem worth a damn.

This was circa ‘03, smack bang at the start of his barnburner days with Andy but still with trace elements of freedom and creativity left over from his sabbatical a few years earlier. Kelly at the crossroads of another phase in an already lengthy career.

The latest chapter in Kelly’s career might not seem the most entertaining, but believe me, we’ll look back on it fondly. Remember when Kelly brought out those dorky threads and modelled them himself? Remember when he fucked around on boards that looked dog shit even before he hit the water? Remember when he spent more time on social media than in the ocean and used the platform to spruik enlightened world views while simultaneously raining on the parade of anyone enjoying an iota of success? Remember the chia seeds? The penis-enhancing wave pool technology? The sport’s longest and most questionable foot injury?

This is page-turning stuff in the Kelly Slater chronicle. Is the king having a midlife crisis in full view of the rest of us—his rivals, his critics, his fans? To be fair though, what other surfer has ever given themselves so fully? What other surfer has been worth talking about at forty-six? Sure, we might not be witnessing much actual surfing, and when we do it’s not exactly lighting us up, but that’ll change. It’s Kelly Slater, it’s what he does.

One day we’ll look back, when Kelly’s set his sights once more on the ocean, when he’s let go of all this extracurricular bullshit and returned to the beautiful equation of himself and the wave, and say, ‘Remember when Kelly went through that wanky phase in his forties?’

Laugh while you can. This chapter won’t last forever. 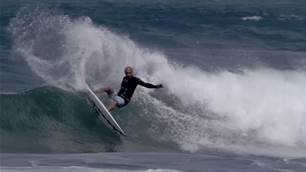