“This is more people than Tony Abbot gets to a press conference,” commented the ABC journalist as she waded through the sea of camera and pen-wielding hacks that had gathered at RedBull HQ in Sydney. Apparently Mick Fanning and Julian Wilson had become bigger news than the Prime Minister after their close encounter with a shark in the final at J-Bay. The mainstream press, save a few surfing zealots on the inside, are notoriously slack when it comes to surfing coverage, but no one can ignore a good shark story, and this one was as compelling as they come.

Mick and Julian were introduced by Mick’s manager and WSL commentator Ronnie Blakey. As they strode down a concrete ramp they were given a hero’s welcome. Applauded for their valour by a suddenly adoring press gallery.

Ronnie summed up the sentiment of the post-attack moment best when he stated that when he was standing alongside Mick just after he came out of the water it was “Like having a wake for the person still next to you.”

Mick looked anything but at peace as he sat perched on the chair in front of the gallery. It was apparent that he was still processing everything that had transpired. Understandably, he had the look of a man who wanted to keep touching his arms to make sure they were there.

It was Julian who spoke first about his role in the traumatic ordeal, after Ronnie revealed that Mick had actually been acting as a mentor for Julian on tour.

Although Julian had paddled directly towards Mick when he realised what was happening, in Wilson’s mind everything was happening too slowly. “I felt like by the time I got to him I‘d be swimming down under water to find him … I just wanted to get their with a board. If I had a board I had a weapon.” Despite his courageous dash to help his mate, Julian admitted that thoughts about his own safety flashed across his mind. “I also felt at any time it could come up on my left side.” They were fighting words.

Mick then gave his account of events through a voice that was obviously strained by the recollection of the memories. Once the shark had come underneath him, severed his legrope and separated him from his board he’d had to make a decision. “Do I go to shore or do I go for my board?” Although he started swimming in freestyle he explained that he’d then decided to turn and confront whatever might be coming after him. “If this thing is coming after me I want to get a look at … I had my fist cocked ready to see what it was going to do.” Much has been made by way of photoshop of Mick’s shark-sparring tactics but his description of the incident made it clear he was in fact fighting the big fish with his fists.

Once safely returned to shore and ushered into commissioner Kieren Perrow’s office Mick was in that bizarre situation where he could watch the replay of his confrontation with the shark. Initially, the footage made the whole ordeal seem even more frightening. “I didn’t think it was that big and then I saw the size of the fin and the size of the tail.” Since then Mick has watched the footage a number of times, a process he suggests is assisting him deal with the psychological scars. “Watching it and talking about it with people really helps… I’m lucky I’ve got some really good people close to me.”

Both surfers played down the suggestion that they were heroes. “I’m no superhero, I just tried to do what anyone else would have done in that situation,” stated Mick humbly. And although Julian was informed he had been nominated for a bravery reward he was quick to suggest any accolades should be going directly to the guy who’d fought off the shark.

As for J-Bay, Julian and Mick were adamant that they wouldn’t be hesitating to go back. Understandably the emotional cocktail associated with that step is a little more complex for Mick. If you count the split victory this year, he’s won at J-Bay four times. He has close ties to a local African family and retains a deep-seated affection for the location. “It’s such a beautiful place. It’s in my top three favourite places… I’ve got to go back. It’s hard but you’ve got to face things.”

Mick wasn’t sure if the incident was going to trigger a massive investment in shark-attack-prevention technology and he certainly wasn’t waving the flag for any of the particular products that purport to be able to reduce the likelihood of shark attack. He was sticking to the common sense interpretation of shark behaviour. “It’s a wild animal, they make decisions when they’re hungry.” When quizzed about the yellow-bottomed board that some research suggests may be have played a part in his attack he again suggested that there was nothing really conclusive, but he wasn’t beyond making a joke. “I don’t know. Maybe I’ll be like Freddy Patacchia (A notorious sharkphobe) and paint all my boards black and white now.”

Certainly, fans will all be anxious to see if the WSL unveils any shark prevention technology in future events. And perhaps every surfer secretly hopes that this incident produces more than the temporary fascination with sharks that follows a major incident. There will always be a risk but there must be a way to make lineups safer that doesn’t involve culling. There are a wide range of practical (specifically coloured wetsuits) and technological solutions (voltage emitting wrist bands, fins, clunky attachments) on offer but one always senses that the best minds and appropriate funding have never really been applied to the problem.

For now however, it’s left to Mick Fanning and Julian Wilson to be the new darlings of the mainstream press. Unless an escaped tiger charges onto the field of an international football match and is tackled by a player, their feat of survival will never be topped in a sporting context. For surf fans, the subplot in all this is just as intriguing. Mick and Julian are ranked two and three in the world respectively (Adriano de Souza is ranked number one). In another context their conference today might have been about the race for the title with five events remaining. Surf fans will be watching this duel between pro surfing’s dynamic pin-up boy and warrior-like three-time world champion. Who knows, maybe the mainstream press will tune in too. 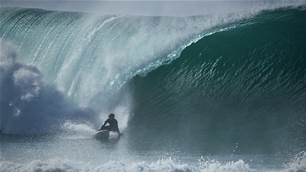 Watch: The Endless Swell in Sydney