There are times in the water when it is preferable to put the blinkers on, keep communication to a minimum and focus like a sniper on nothing but the next wave. Such an approach is usually preferable when the waves are firing or your girlfriend is on the beach signalling it's time to come in and go to lunch with the in-laws. However, there are also circumstances in which it is beneficial to embrace the inherent social dimension of surfing. You can never be quite sure who you are sharing a lineup with until you open the dialogue with one of those simple but effective surfing icebreakers like, ‘That last one you had looked fun.’

A recent trip to Sri Lanka saw me posted up at a left point on the island’s southern tip. The break was a kind of wobbly, cross-chopped lump that occasionally conspired to produce a decent runner if the swells ricochet off the big outside rock at the right angle. Still, the wave was consistently fun and served as the catalyst for a number of intriguing meetings.

Between sets a goofy footer named Mohammed or Mo’ for short explained to me that he was from Dubai and that his ancestors were Bedouins who roamed the desert, some of them eking out a living as pearl gatherers on the Arabian gulf. These days his family were less nomadic, but preserved an attachment to their cultural roots by racing Falcons (Not V8’s, real birds). The biggest annual bird race apparently draws entries from all over the Middle East. Mo chuckled as he explained, between sets, that first prize for the 400m Falcon dash is a brand new Range Rover.

Mo, who had been to University in Australia, was also a veteran of many expeditions to the coast of Oman (8hrs drive from Dubai) and vividly described the endless right points he regularly scores in the Arabian Sea. Will I chase him up for a possible surf mission to Oman? It would certainly put a twist in the next Dubai stop over.

Surfing on dusk at the same left point, a long lull gave me the opportunity to chat to an Ozi guy who worked with the Australian embassy in Sri Lanka. Conversation ranged between the complicated issue of Sri Lankan boat people aiming for Australia in rickety fishing vessels, to the purchase of a nearby, major port by the Chinese government and the political and military implications such a move had for the entire region. It was heavy dialogue, punctuated by debate about whether or not the wave’s best take off spot was in fact right behind the big rock that refracted the swell. Just before darkness brought and abrupt closure to the conversation, I recommended that the guy from the embassy read Jock Serong’s compelling novel ‘On Java Ridge’, which hypothesises what might happen if a surf boat charter came across a crew of boat people. (I recommend it to all actually).

On my last day the point jacked up in size; wind-swept eight foot sets slamming into the big, outside rock, which sapped just enough energy out of the swells to bend them into the bay as warbling five-footers with bucking take-offs.

I shared the lineup with an amiable South African named Graeme, who indicated that he owned a craft beer company named ‘Poison City’ in Durban. The name of the beer company took inspiration from the notorious ‘Durban Poison’ the potent strand of Durban dope that has kept many a South African surfer happily stoned for decades. Graeme had been a corporate guy in a past life but was obviously enjoying his reinvention as the co-creator of the mischievously named craft ale. He even had big wave world champ, Grant ‘Twiggy’ Baker, on the books as a team rider for Durban Poison.

Graeme suggested he’d already worked on a brew that was laced with real marijuana. For now it contained none of the powerful THC which actually gets you stoned, but he suggested that as soon as the laws were relaxed his beers (like many in the US now legally can) could get you simultaneously tipsy and stoned. Maybe that’s just what Jordy Smith needs to win a world title, I wondered?

The moral of this meandering story is that enriching our surfing experience goes beyond the waves we ride. The guy or girl in the lineup next to you may be the source of a life-long friendship or simply offer an intriguing anecdote that helps to kill time during the lulls. If you’re friendly enough in the water as a travelling surfer, someone might even reveal the location of a dreamy break you weren’t even aware of.

In short, sometimes it pays to take the imaginary heat singlet off, put the ego aside and recognise that the person you have pegged as a threat to your wave quota could be a source of insight into a whole new world. 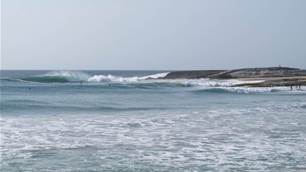 Just another day in Sri Lanka 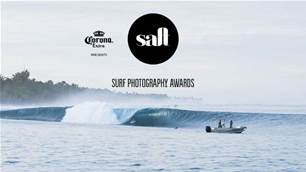 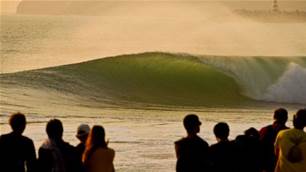