Kelly advances along with Filipe, Jordy and Gabriel go down.

It was a big surprise to see Jordy eliminated from the event this morning. The conditions at Keramas were quite incredible, and both Jordy and Jesse Mendes were on form. The waves ridden were really good; the massive turns were being scored, and we all know that Jordy is capable of so much more. It was close, really close, and the word out there is of a savage low-balling for the South African. There is the contention that if the judges were clearly scoring for the air games and the huge punts, then how did a backhand barrel from Jesse get the wining score?

It was mentioned in the criteria for the day that for a barrel to get the big score, it needed to be deep and throaty, and Jesse’s neat backhand barrel was far from that. With less than a point in it, the loss was a crushing blow to Jordy’s chances on the world title chase at a venue that is almost tailor-made for his style of power surfing. 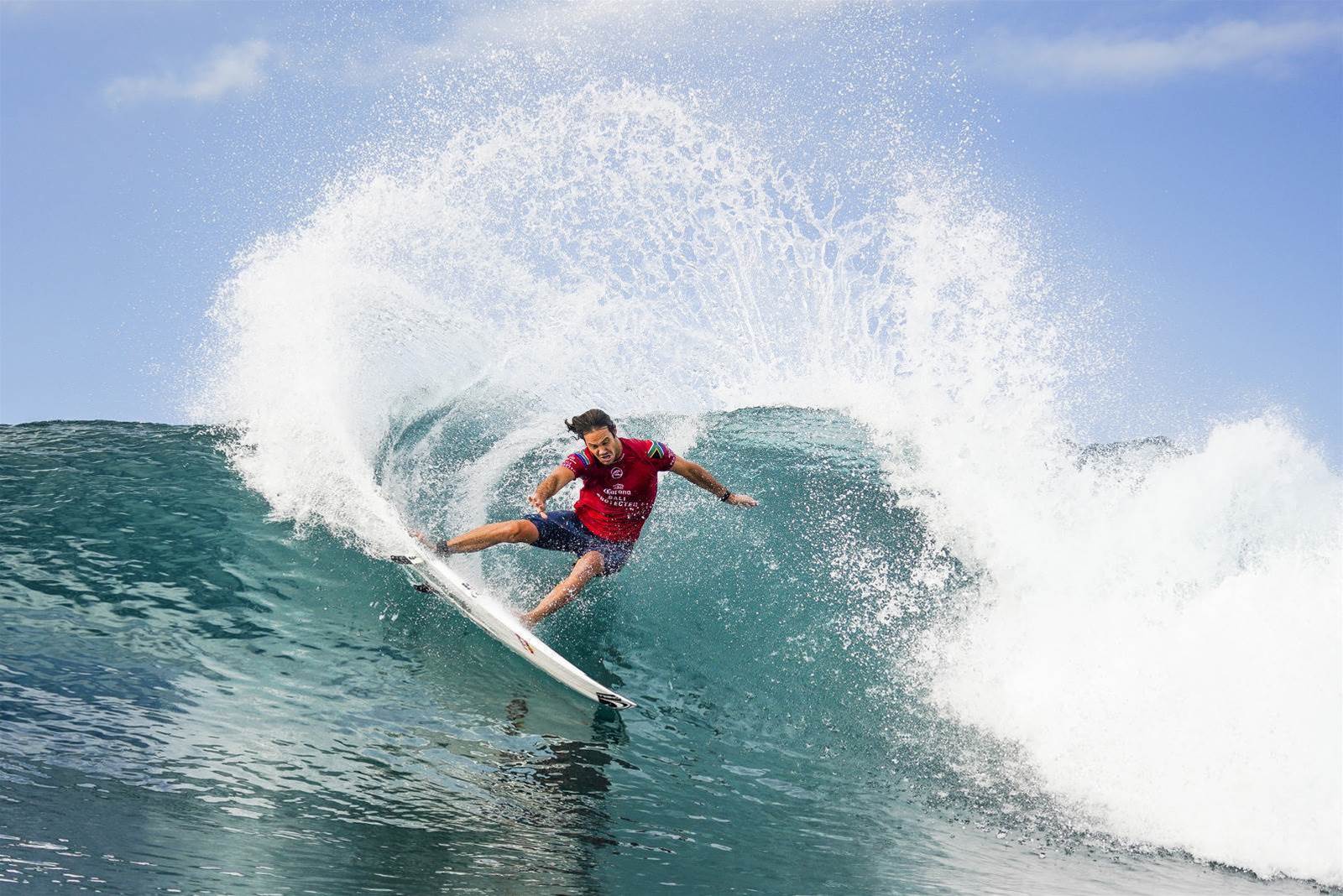 This turn or a half stuffed tube? Hmmmm ... Photo: WSL/Dorsey

Jordy rarely gets angry, hardly ever, but he gave his board one big hit, to show his frustration. It was a big deal. Martin Potter also questioned the scoring of the backhand barrel. “The result was a big question mark for me,” said Pottz. Similarly, Strider, who was watching from the water, admitted that, “It should have gone Jordy’s way.” The online world lit up with the result, and it didn't look pretty.

On a brighter note, Wade Carmichael brought some incredibly powerful turns to his heat, and surfed very controlled and competitive, putting muscles into his combos, and finishing off his rides neatly to solidify the judge’s appraisals. He wasn't going for the air, he wasn't even looking for the air sections, he was just looking for a place to sink a rail and throw some rooster-tails, a skill that he’s more than proficient at. His big score 8.5 was another power-and-precision wave, with three full-rail carves in combination, that was enough to get surfers and spectators alike cheering for his unique approach. His opponent Joan Duru continued to show his radically improved vertical backhand approach, but it wasn't enough against the rampaging longhair.

@wadecarmichael throwing buckets! He just earned the highest wave score of the day with an 8.50! - Tune in LIVE on wordsurfleague.com, Facebook Live, or the free WSL app! #CoronaBaliProtected @corona

There was obviously a ton of interest in the Toledo V Callinan heat, with Filipe possibly the most on-form surfer in the world right now, but with the judges and sports fans really enjoying Callinan’s performance and approach of late. His backhand surfing is tight, fast and vertical, and he has been surfing with a calculated approach but adding in flair whenever he can, answering all of the judging criteria on the respective days’ surfing as well as showing a great variety. Filipe took to the air though, finding one incredible wave with two progressive air moves including a tweaked nose-pick reverse on the inside section off a little lip that wasn’t looking like an air section. It was a wave with all the variety and progression that was needed, and his 8.6 score was justified and saw him to victory.

Michel Bourez brought a new level of power to the game against Kelly, and showed from the start that it was buckets of water that was going to impress the judges. Having said that, he also has an air game, and his first air, while not part of one of his top two rides, added interesting variety to his power-based surfing. Whereas Carmichael has no air game to speak of, Bourez still has a trick or two up his sleeve. His surfing is so savage, so powerful, but Kelly was not in the mood to tolerate any of it. Slater surfed strong and with power, and while not pulling off any wild moves in the air, he mixed it up beautifully with a long and drawn out wrapping cutback to fully utilize one big, open wall. The fact that his brings in variety to the game is refreshing to watch at this stage, where so many surfers were, as Martin Potter put it, ‘tic-tacking along, looking for the little air sections.”

Kelly then proceeded to do the old ‘wily competitor’ thing that he knows so well. He paddled Michel up the point until they were sitting fairly deep, and then snuck an insider out of priority. The wave turned into an absolute nugget, and taking off deep, got barrelled all the way across the reef. Kelly sneaked out cleanly and went straight into an under the lip gouge to complete one of the better combos of the day. The score of 7.5 was well deserved and he won the heat, albeit by a slim margin.

“My chance came under his priority, and then when that thing came and he didn't look at it, I had to scrap to get into it,” he said of the winning wave. Kelly’s definitely buoyant however, laughing and free-styling in the interviews, and is unquestionably looking like he has found something that is getting him the hear results he craves. “There’s a little bit of magic,” he admitted after the heat, “something’s happening.”

Indeed, something is happening. 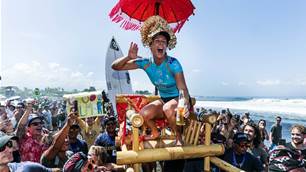 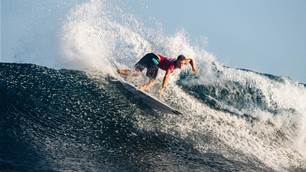 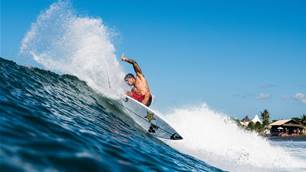