The legrope has, in recent years, become the focus of controversy. There is a particular kind of surfer who will pull up their nose with disdain at the very thought of using one, and claim to embrace the freedom of being rope-less as a return to a purer, more “old-school” style of surfing. This untethered ideology is prominent amongst longboarders, who feel that the rope gets in the way of the art of walking up and down the board, cross-stepping or otherwise. The feeling is not shared by everyone else, with a large number of people, surprisingly, being more interested in not having their brains smashed in by out-of-control logs flying around.

My local break gets a fair few people at certain times of the year. It’s a mellow wave and is widely sought out for its prime longboarding quality. It can get pretty hectic. At times it gets so crowded it turns into a ten-pin bowling alley, and it’s all you can do to slalom in between heads, boards and airborne bums, like a downhill racer in the snow.

On this day I was out on my own longboard, complete with legrope, needless to say, and I had caught a nice long easy ride from the point half way across the bay. The wave petered out and I rolled backwards off my board in great style, arms and legs disappearing in five different directions. As I stuck my head back out again and grabbed my board to climb back on again, a bloke took off on a wave a little way upstream of me. I saw him get to his feet, and, with growing trepidation, watched as he started The Boardwalk. Tiptoe, traipsing through the tulips, legs carefully and delicately crossing over on his way down to the coveted hang five or ten. My eyes drifted to the back of the board, scouting for the tell-tale black curl of a legrope. In double time they flicked back to the bloke’s ankles. Not having spied anything in both locations, they rushed up to inspect the high calf below the knee, where responsible board-walkers often tie off their ropes. Word has it that this affords all the freedom required to execute the most demanding longboard moves – so I have it on good authority. Personally, I wouldn’t know, my most noteworthy – and only – longboard move consisting of barreling down the face as fast as I can with all the grace of a double-jointed giraffe on valium.

My eyes found the area below the knee to be vacant of legrope.

It was clear. Here was a true Soul Surfer, a hard-core traditionalist. A practitioner of The Art Of Living On The Edge. Free and unencumbered by bonds, chains, tethers and restraints of any nature, and happily and blissfully not interested in the slightest in the potential for killing other people.

I took a deep breath and waited for the moment.

He dropped a knee and veered left, towards the white foam. Swung his arms around with great skill – refined and honed over many years of watching ‘The Endless Summer’ and balancing on his mum’s ironing board – and turned back to the right. Then he balanced with extreme care and extraordinary grace on one leg, and, very, very slowly, fell over sideways into the face of the wave.

The board shot out from underneath him. Relieved from his weight and propelled onwards by the impetus of his feet pushing it forward as he came off, it was now a fibreglass missile picking up speed by the nano-second, and, of course, it came straight at me, plotting a course somewhere between my eyes and my nostrils.

I moved to the left.

As if possessed by a homing beacon, the board moved to the left as well.

I twitched to the right.

A freak, previously non-existent breeze popped up out of nowhere, lifted up the nose of the board, and pushed it over to the right.

There was nothing else for it.

With a split second to go before impact, I tucked into a roll, covered my head with my arms and scrambled for the sand below. The board flashed inches above my head in a trail of bubbles and disappeared.

I stuck my head back out again and sucked in air. Looked around. There, off to the side, the board was spearing into the crowd out of control, by all appearances set on a path of death and destruction, presumably targeting small children on boogieboards and old ladies on li-los.

I swung my head around to the other side. There, arms flapping leisurely in a controlled and professional doggy-paddle, was The Soul Surfer, in less than hot pursuit of his board.

I stared at him and ran over a select choice of insults in my mind, but, wary of being the source of aggro vibes in the surf, bit them all back and didn’t say anything.

As he cruised past, in no obvious hurry, he looked sideways and grinned sheepishly.

Then he looked away again, and, without a word of explanation, apology or regret, continued on down, following a trail of screams, curses and howls towards his ballistic projectile, bobbing around 100 metres downstream, quite possibly surrounded by unconscious bodies floating face down in the water.

It’s all fun and games till someone gets hurt.

Three days later an untethered board smashed into a girl surfer and took her leg out. She had to be carried from the water and left in an ambulance. 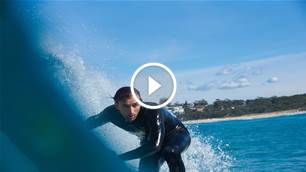