The proposal to build a surfable wave pool in the heart of Melbourne is one step closer to reality.

Last week, Rogers was nominated as the only non-US based representative to compete at a New York ideas competition called Pitching The City. The competitors in the contest aim to look at how we could use urban spaces in alternate and innovative ways in order to reinvigorate our cities’ recreational metropolitan areas. Rogers will be presenting his innovative plans to create a park, a set of shops and a surfable, artificial wave in Docklands, Melbourne. He believes that the nomination is just another step towards seeing his ‘Docklands Surf Park’ vision realised.

“I’m not looking at it as a thought bubble. It’s something that we’re working towards realising and… we are making progress.”

Rogers’ immense passion for the project is something that may help him overcome the various hurdles he faces in order to actualise his design.

“At this stage there’s a lot of procedures to get through, with regards to planning and councils,” he said. “We’re working on more technical things now… but it’s not insurmountable.”

One of the major technical barriers for Rogers has been the engineering behind creating surfable artificial waves, an area in which he is not an expert. He has been working closely with various artificial wave experts around Australia and is ‘getting close’ to a partnership with one of them.

“Certainly we’ve done a lot of research prior to going to press and it’s… quite a competitive market out there,” he said. “Stay tuned is all I can say because we’re looking forward to making some sort of definitive announcement on that.”

Greg Webber, as one of the leaders in wave pool technology, has been someone that Rogers has been in contact with.

“I’ve met Greg and as I said in another interview he has a lot of experience in this field so I think Greg’s doing a great job and we want to continue to talk to Greg.

Surfing Victoria has also been highly supportive of the project and may be able to help Damian through some of these processes in the future.

“I’ve been approached many times about these wave parks in Victoria,” said Max Wells, CEO of Surfing Victoria. “I like this one because it’s actually in the centre of Melbourne… it’s something that I’ve spoken to many levels of government about.”

“We support the project and… I’ve introduced Damian to a number of government people.”

Most importantly for Surfing Victoria, the wave has to be of a high enough standard to be able to cater for competitive surfing.

“The wave has to be of a quality on which we can run some level of competition,” said Wells. “If it can be dialled to competition surfing level, dialled down to intermediate level and dialled down [again] to learn to surf then it becomes a far more viable proposition.”

The idea of hosting competition at the Docklands Surf Park is also vital for Rogers.

“Holding events… is a huge element of how we want to use this wave. We can imagine floating grandstands either side it with people lining up and watching competitions,” the 41-year-old architect said. “You are actually getting the same wave coming through on which to test each other’s true ability.”

Yet, the ability to learn how to surf is also crucial to making the wave park viable economically.

“One of the important markets with these waves is the learn to surf. There’s been research done by Surfing Victoria and other research bodies that [shows]… there’s a huge uptake in surfing for people who would otherwise be reluctant to try it in a less secure environment.”

Rogers suggested that people would be more likely to surf if they didn’t have to worry about sharks and if it was presented in a “more controlled way”. This increase in surfing numbers will do great things for surfing and for the city of Melbourne, according to the architect.

“It gives Melbourne the opportunity to be amoungst the first in the world. I’m very passionate about bringing interest and excitement to our cities.”

The project’s nomination as the only non-US based competitor at New York’s Pitching the City competition highlights the global intrigue in the Docklands Wave Park. If the surfable wave pool does become a reality, Rogers suggests that many more around the world will follow with similar urban designs, which radically change the way we use our cities. These designs may not necessarily be surfable wave parks but a similar reimagining of how we use metropolitan spaces. Our urban hubs might just become, to use Rogers’ words, “magical” places. 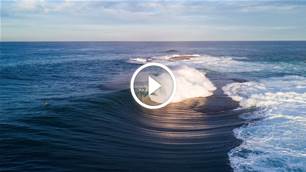