With the Mundaka rivermouth predictably flat all week, the Billabong Pro has become a long forgotten sideshow as the tiny Basque fishing village hosted the movers and shakers of the pro surfing world for ASP board meetings. They were here in response to the threat from the rival, Slater-endorsed “Champions Tour”. They were here to reinvent the ASP tour and to shore up the support of the surfers. They were here to create some certainty in uncertain times.

A lot of what came out of the meetings was done on the run, and you begin to see why these guys were so frazzled when they emerged from the meetings each evening this week. Even today’s announcements were made at a hastily organised press conference with a Billabong Pro contest backdrop the best the ASP could rustle up on short notice. But a response was needed and it was needed sooner rather than later.

There are three key changes that were rolled out today.

The first change was the introduction of a “one world ranking” which will come into play after four events of the 2010 season. The current field of 45 and three wildcards will be lopped back to 32 and four wildcards, meaning the events from J-Bay onwards next year will be 36-man affairs. Then, three-quarters of the way through the 2010 season, a yet-to-be-finalised number of the highest-rated WQS surfers will move up onto the Top Tour while the corresponding number of backmarkers on the Top Tour will drop back to the WQS. This will happen “three or four times a year” from that point on. It’s an inexact science at the moment, and having how this will all be determined explained to him gave your correspondent an immediate and blinding headache. But the concept sat solid – three times a year dead wood is replaced by fresh blood. Just as importantly it also means events can be run in under three days – the duration of your average swell. The tour today shed some pounds, and it was apt that the Mundaka lineup – 48 surfers have never fitted here into one swell and four hours of low tide – sprawled out flat and lifeless below today’s press conference. 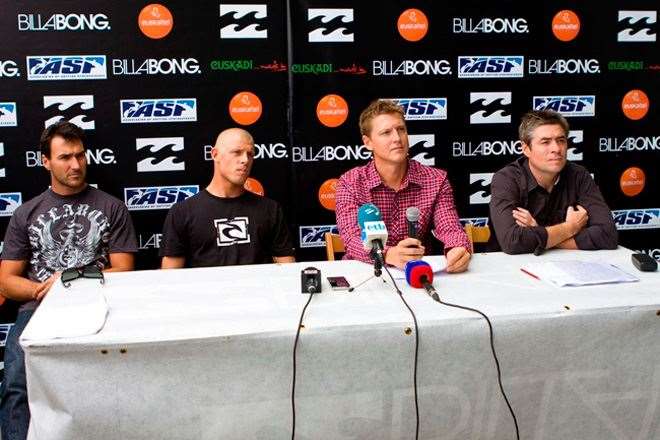 The second change was an increase in prizemoney. From the start of 2010, total prizemoney for each tour event will be $US400,000, up from the current $340,000. The winner, according to surfer rep Mick Fanning who was still a bit hazy on it, will walk away with “fifty or sixty grand.” Total prizemoney goes up to $425,000 per event in 2011. Also, from 2010 a world title bonus of $100,000 will be dished out. Joel Parkinson provided one of the few lighter moments of a press conference when asked about the bonus. Seated next to Fanning – the guy he’ll joust with for this year’s title – Parko quipped, “The hundred grand’s coming in this year, right?”

However, it’s the third change that is likely to have the most profound ongoing effect on the sport. Driving much of the mutinous miasma in the lead up to Mundaka was the entrenched power the licensees – namely the Big Three – have had over the tour by their voting power on the board. The board of the ASP is currently made up five members – a chairman, two event reps and two surfer reps. That changed today. The new board will comprise three independents, two event reps and two surfers reps, effectively diluting the clout the licensees have on matters voted on at board level. The new balance of board power will be interesting to watch in action, particularly in regards to chain brand and non-endemic sponsorship, as well as in regards to media rights, a subject that wasn’t broached today.

In terms of event media rights – the trump card of the Champions Tour who had ESPN in their corner – there was stony silence. Currently controlled by the individual licensees and not the ASP itself, Mick Fanning hinted this is the next wholesale change coming to the tour. “At the moment the media is with the events still,” said Mick. “We’re going to form a committee within the ASP to look at the media and make more of a package deal of it rather than it being event by event. The aim is to make it consistent across the board. It’s all a work in progress.”

There was, however, one notable absentee from the press conference. Kelly Slater hasn’t been in Mundaka all week, choosing instead to stay two hours up the coast in France. When asked today whether he’d heard from Kelly had over the past two days, ASP CEO Brodie Carr responded curtly, “No.” Surfer rep Kieren Perrow was diplomatic when asked about Kelly’s involvement. “Over the last few months we’ve been talking to Kelly heaps. He’s been coming to some of the surfers meetings and been calling us and sending emails. He’s always been made to feel like he’s a part of what we were doing. He’s said all along that he wants to do what’s best for surfing and I truly believe that’s the motivation for him. He wants to make the sport better, and that’s where we’re coming from too.”

Today the surfers chose measured evolution over mutiny. Several surfers have privately confided that the Champions Tour was far too smoky a proposition to hitch their wagon to. No one has seen a cent of the promised money. But you always had a feeling that maybe the surfers sensed this all along and were simply using the threat of the new tour as leverage to improve their lot. If so, it certainly worked. The surfers today got what they wanted – less guys, more money, and a watering down of the Big Three’s influence on the tour. Kelly may have been maligned in some circles for his involvement with the rebel tour and his challenge to the establishment, but not, apparently, with his some of his peers.

“We owe him a beer,” quipped one of them this afternoon.