Is Caroline Marks Going To Change The World?

And then there’s this wave.

Supers, it has been said a thousand times over, makes you look good if you’re good, but it makes you look really average if you have weaknesses. So, often this year, we’d be watching the action live, and some faceless entity would say, ‘why did he hit that section? He needed to race it, not hit it,’ or ‘look at that!’ as another empty wave peeled down the forever after a surfer had fluffed a silly move when the wave still had at least 150 meters to go.

There have also been many absolutely golden moments though, when Supers has done nothing but make the world a better place for you, and for me.

That time when Occy surfed it for the first time in 1984, and gave the world a glimpse into the void, or when Parko won the event in 1999 as a wildcard, and started a dinner-party revolution of beautiful but non-critical smoothness at Supers. Tom Curran’s opening ride (which was actually his second, he got burned on the first, as you do at Supers) and Jordy’s aerial-style win in 2010 on Nelson Mandela’s birthday. And of course there was Filipe’s dizzying double alley-oop in 2017.

Caroline Marks is one such person who blows minds at Supers for fans, spectators and judges. People come down to the beach to watch her surf, people whisper words like ‘Occy’ and ‘power’ when she paddles out, and commentators toss superlatives at her every turn, and it’s all pretty much spot-on. Ain't nothing going to stop her from a world title. Or two, or five, or more.

The girl kills it.

In the Corona Open JBay she came up against Tatiana Weston-Webb and Silvana Lima, both seasoned competitors. She smoked them both with her devastating backhand attack and rooster tails to the sky, with surfing that is raw and powerful, yet stylish.

She’s definitely not a plug-and-play world champion though, with certain voices in the JBay peanut-gallery not sold on the deal.

“A bit repetitive,” and “not the best style,” are two of the negativities that can be heard at times, but no one can fault the fact that under the current, basic judging criteria of speed power and flow, she does have all the markings of a world champion. With Luke Egan in her camp, her insight on the world’s best right-hand point-break must be vast. Egan won the Dream Sequence Derek Hynd contest back in the 80’s, and was a standout on big Sunday before the contest began.

After over thirty years of visiting #supertubesjbay the feeling of flying down the line with such an amazing huge green face in front of you to draw what ever lines you want never gets old. Getting that feeling again this week continues the love affair I have with this place. #jbay #grateful #lifetimememories 🙏🏽

Sitting at number 6 on the Jeep leaderboard, Caroline has five pretty gnarly surfers ahead of her, but winning the opening event of the year, the Boost Mobile Pro Gold Coast at 17 years of age, definitely proved a point to her and the rest of the tour that she most definitely has the skills and the temerity to win, and she has the next 20 years ahead of her to do just that.

She does need another win this year however, to confirm her status as a future contender, and after her performance in the women’s seeding round this event could be the one where she does just that.

Marks will come up against Paige Hareb in the round of 16 at the Corona Open JBay, when the contest resumes.

There is a new swell that is forecast to arrive on Friday in JBay, but the main push is only late in the afternoon, and there is a wise old surfer from the area called Zibie who always talks about his ‘4 hour late’ rule for south-west swells. Any swell moving up the coast arrives about four hours later than forecast, while the wind will always arrive early, which means that the swell will only make landfall in JBay too late for competition. The next good storm is further out, with a strong pulse for Tuesday and Wednesday next week. Stand by. 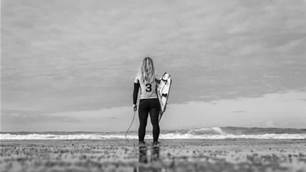