Why the Brazilian contingent is killing it right now.

The waves were pulsing, and there were some barrels rifling through from behind the rock. The contestants were trading set waves, and the goofy-footer eventually chose to surf further down, almost in front of the WSL mega-structure, hanging over the lineup. It was Snapper, but it was 2014, and the world was a different place back then.

Gabby won the event, and the Brazilian fans went Brazilian, whooping and chanting. They were fans that had hung around the whole day, some in speedos, others with their brown derrieres seductively hanging out of little bikinis. They were all celebrating along with Gabby, some not even sure of the Championship Tour system, some totally in tune with the fact that their superstar was going to be a world title contender.

We all got swept up with the emotion of it all. There were WSL employees - commentators and judges and others – who were grinning and clapping along with the rest of the fans. Some might have been clapping because a great contest has come to a conclusion, others clapping for the event champion. It was a great moment.

Other people were incensed.

The sport of professional surfing lends itself to conspiracy theories. It could be as a result of the subjectivity of the judging process, it could be due to past weirdness in judging and in executive decision-making. It could also be as a result of strange communication, or it might even be due to the advent of Social Media and the trolls that come with it. Either way, the sport is rife with theories and theorists.

The Brazilian Storm theory had always been around. Since the days of Flavio Padaratz and Fabio Gouveia and leading on to Adriano de Souza, it was always said that the Brazilians were going to take over the World Tour – that they were so numerous and so hungry that it was a matter of time before it was a Brazilian World Tour. The theory that was expounded to me was that the Brazilian Storm was exactly what the World Surf League were engineering. They wanted the numbers.

Brazil represented a new frontier of untapped potential that would take the WSL to the next level, and would elevate the spectator numbers, the views, the clicks, and thus the value of webcast advertising. So the WSL were going to slowly and tacitly bring about a Brazilanization of the tour, make Brazilian heroes for the world to see, and who knows, maybe even crown a Brazilian World Champion in the process.

It’s a great theory, and one that started off with massive impetus with a Brazilian goofy-footer winning an Australian contest against a former world champion natural-footer at his local break. Immediately after the final, angry comments that Medinas soft ‘window-wiper’ turns were not on the same level as Joel’s carves and his barrels started moving around social media, and gaining some traction. That it was a set-up from the start and that the WSL were now set to surreptitiously usher in a new wave of Brazilians, and then move into their territory.

Now, a year later, you can ponder the theory, and look directly at the facts. We have a Brazilian world champion in Gabby, and we have the first event of the year being won by a fellow Brazilian, and a Brazilian runner up in the second event of the year. On top of that, one just has to look at the World Surf League Facebook page to see that it is predominantly Gabby and Felipe, with a bit of Slater and Sally thrown in the mix.

Finally, we hear that the WSL has signed a huge TV deal with the Brazilian company Globosat, bringing the World Surf League to an extra 50 million Brazilian viewers. (Read Here).

Reek of conspiracy? Let’s break at all down shall we? C’mon..

Over the year 2014, Gabby became a world champion because he was quite simply the best competitive surfer on the planet. He actually won three events, got one second-place finish, and a consistent four fifth-place finishes, making for a very consistent and strong world champion performance. In all seriousness it would be hard for judges to manufacture that sort of contest record over a year. Not too much conspiracy.

Felipe Toledo winning the first event of the year wasn’t a forced result, but was more due to the fact that the waves were tiny, Toledo is one of the best small wave surfers in the world right now, and weighs in at 60kgs. That three-pointed attack saw him to victory, and it was clear that he won it against JDub with straight judging - 19.60 vs 14.70. No conspiracy there.

Then the Brazilian TV deal. Underneath all the progressive steps that the WSL are undertaking for the best professional surfers in the world and their sport and livelihoods, they are, after all, a business. If it makes good business sense to turn on 50 million Brazilians to the sport, then run with it. If the Brazilian TV deal accelerates the growth of the sport and garners further attention, sponsorship and progress, as well as improving the lives of the surfers on tour, then onwards and upwards.

Finally, we have the psychology of the Brazilian professional surfer. The hunger is so bad with some of them that it hurts. On top of that, there is a fairly solid domestic WQS tour that trains them in the skills of competitive surfing, gets them valuable points, and helps them step up to the plate when the pressure is on. Then there’s the solidarity of these non-English speaking surfers. They stick together, they support each other, and they help each other when times get shit. Many aloof WQS campaigners could learn from their patriotic cohesion.

So if you’re not into professional surfing and its new, ever-morphing and somewhat Brazilian personality, then maybe its time for you to move along, quietly. 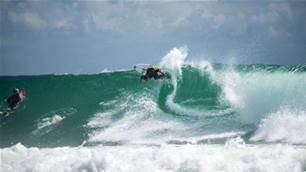