John John is oh so close and still a way to go.

So, after Deputy Commissioner Trav Logie’s hope-and-a-prayer patience game yesterday that eventually paid off with solid barrel dividends, it comes down to this. John John Florence is one or two heat wins away from fulfilling his destiny. Jordy Smith is two heat wins away from brushing aside John John’s fate and keeping alive his own. Kolohe Andino needs the same amount of victories to claim his first world tour title. And Conner Coffin, for all his nice guy antics and articulate post-heat interviews, would no doubt like to play spoiler to all their plans.

John John is so close he can smell it, beyond the whiff of sardines and salty Portuguese air—the achievement that would validate every claim of greatness that has ever been bestowed on him, the world champ’s crown that’d fit so snugly on his princely blonde head. Since recovering from his first round stumble and then watching his closest rival fall in the drama of round 3, the kid many believe to be the best in the world has not put a foot wrong. He’s been steely, dominant, even outright superior in his quarter-final win over a determined Julian Wilson. If his eyes stay on the prize and the barrels stay open, come tomorrow you could be looking at your newest world champ. 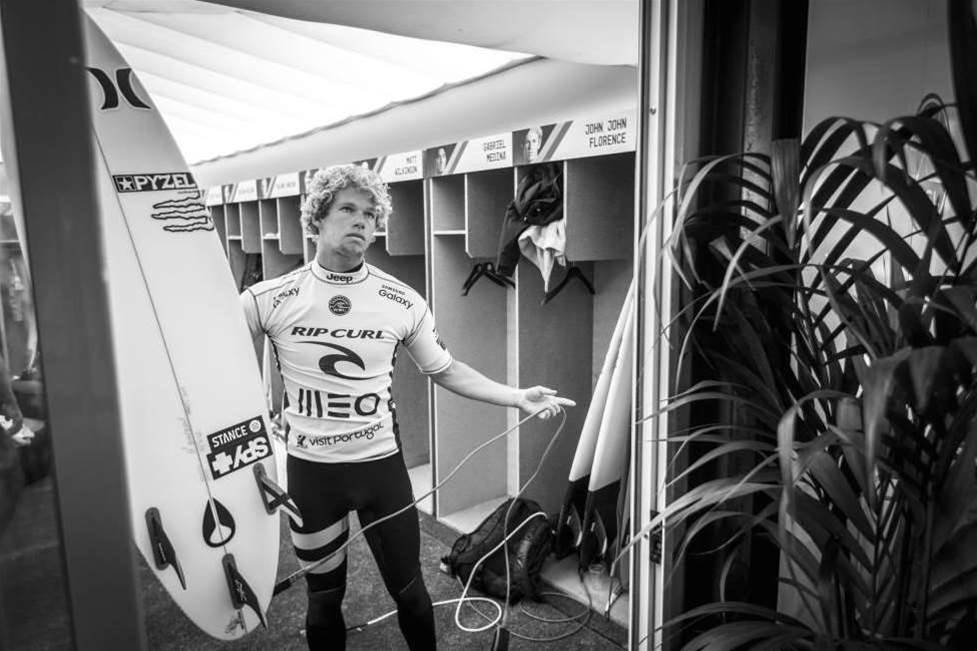 John John gets into the zone. Photo: WSL/Poullenot/Aquashot

Kolohe Andino is the first obstacle standing in his way, and one gets the sense that he’s not going to step aside easily. Two semi-finals in two events and a couple of red-hot performances in the last few rounds shows where the Californian prodigy’s head is at. It’s at a place from which he can take a giant step. The kind that could transform him from a natural talent with loads of potential to a force to be reckoned with, a collector of first prize trophies and winner’s cheques. If it’s true that a world title campaign starts the year before, then a win here for Kolohe will give him the confidence to firmly insert himself into the world title conversation with John John and Medina in 2017. 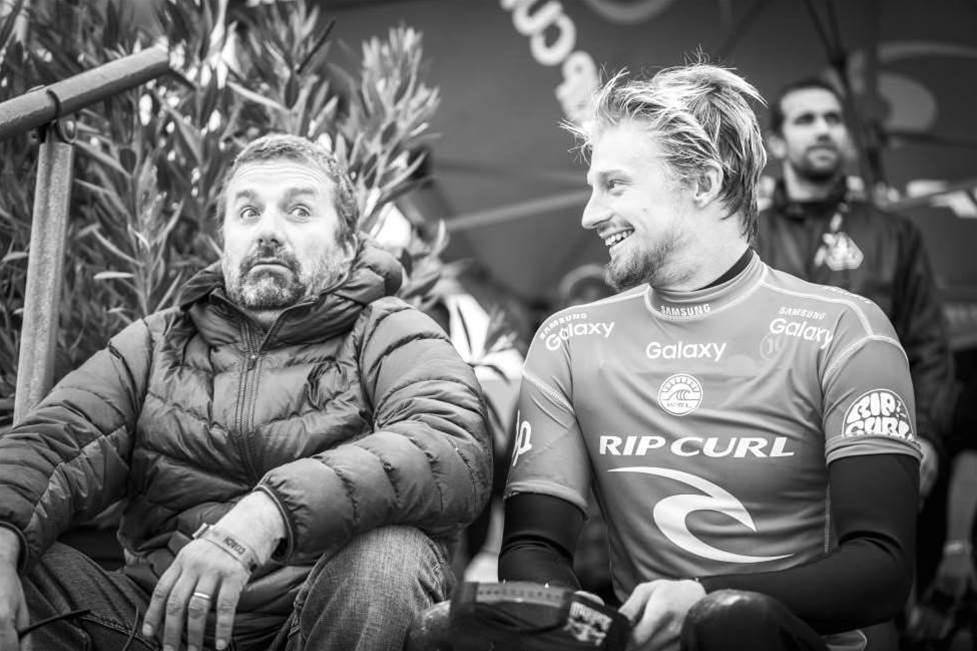 Kolohe has been on fire in Portugal. Will he play Spoiler? Photo: WSL/Poullenot/Aquashot

On the other side of the draw stands a big South African with a big task ahead of him. Not only does Jordy need to overcome rookie upstart Conner Coffin in their semi-final clash to stay in the hunt for that elusive title, he needs to win the event outright, regardless of whether he’s facing Kolohe or John. And then there’s still the uncertainty of Pipe ahead. But one heat at a time at this stage, or even one wave at a time, especially if it’s the kind of grinding, throaty keg that gifted the big man a perfect ten in his quarters and helped him keep that long overdue dream alive. 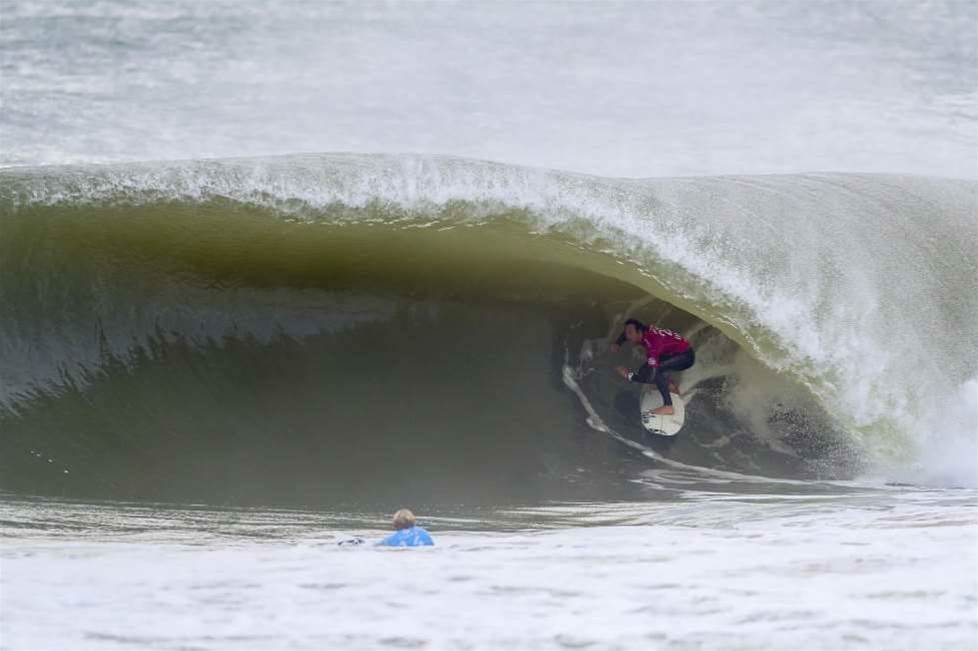 Jordy Found some magic yesterday to keep the title dream alive, will he be able to do it again? Photo: WSL/Cestari

Then, finally, there’s Conner, the powerful young natural-footer who promised so much at the start of the year and then fell in a reeking heap with most the other rookies, only to find himself anew here in Portugal. Suddenly he’s not thinking about whether or not he’s going to requalify, but whether or not he can pinch the rookie of the year title off Caio Ibelli. Suddenly he’s wondering whether he, rather than John or Kolohe or Jordy, can win this thing. Hell, maybe this is where he belongs, in the realm of the contender? 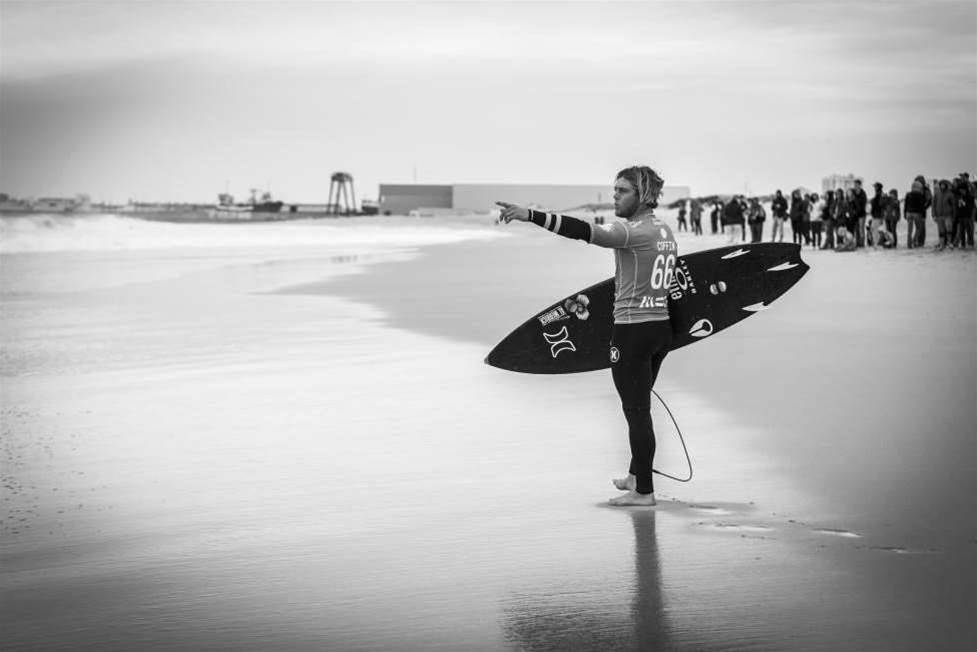 Can Conner keep his place on tour? Photo: WSL/Poullenot

So much speculation, so much on the line, yet only time will tell.