The reason we went to Ireland was because of Litmus, a seminal movie by Andrew Kidman.

Living in the UK had been a hard task. I had left South Africa to find my fortune, and all I had found so far had been a pub culture and labouring work on the many construction sites that littered central London at the time. There were so many of us surfers, travellers and desperate people looking at earning good currency and doing what we wanted with the coin when we had it, but it wasn’t easy.

Many of us made money and went to Indo and spent most of the worst part of the English winter surfing around Nias and Bawa. Even Bali was doable back then, in the mid-90s. It was early days, the Surfers Of Fortune movie had just ben released, shaky footage of Pottz and Tom Carroll surfing a secret Mentawai island down south was doing the rounds, and not many knew where HTs was, yet. That would soon change, and Martin Daly would become famous for revealing the best slice of surfing heaven in the world.

We, however, were off to Ireland. It always seemed like a no brainer to take your cash and head for summer and boardies to get away from the horrid English winter, but my English friends had advised me to spend less money on travel, get a good wetsuit, and come surf Ireland. When we saw Litmus in 1996, and watched the Joel Fitzgerald section at Pmpa, we decided to hit it.

The Peak at Bundoran is a great wave. Gets a bit busy, but there are loads of waves to be had – barrels, big open faces, long rides and surprisingly the water is not that cold. Ireland gets fed some warmer water than what is believed, although the air was generally pretty chilly most of the time. We cracked a few sessions, but were chasing a right-hand slab that we had seen in Litmus.

Eventually we spotted a swell that was suited for the slab, but the tides weren’t quite right and we needed to hit it at first light, in order for it to have enough water on the reef. We had a photographer Sharpy (Roger Sharp, Carve Magazine editor) and a videographer ready, and a few surfers keen to hit it. We woke up in the dark, and sat at the slab in our car, waiting for the early morning rays to light it up.

It was barely wet. The tide just wasn't giving it enough water, and the sets would go dry before heaving out spit in a myriad of different directions, but over dry and fairly pointy rocks. The videographer was urging the surfers to go, to get out there, but it would have been finless carnage. We headed up the road to Pmpa.

It was a long time ago. None of the locals apart from Richie Fitzgerald, were too interested in surfing the gnarly left that took no prisoners. It left no room for mistakes, and in pioneering such a surf spot, it looked like there was no way back in to dry land with waves belting against the cliff, and certain death the consequence of getting caught inside on the end section. This day was eight foot. I was sidelined by an injury, thank fuck, because it was a big deal out there. The crew all got some bombs and handled it admirably. I was being over-dramatic. “Just come in over the rocks guys,” said Richie. “All will be cool.”

That afternoon I asked if we could go to check out the castle in the distance. Classiebawn Castle was the place that Lord Mountbatten had been killed in 1979, and for some reason I remembered reading about it as a kid in South Africa. Maybe I did a research project on it at school, or maybe my mom was an admirer, but I knew the story of the IRA bomb that killed Mountbatten, his grandson and a young boat-boy.

The castle was quite magnificent from the outside. The wind was howling a gale, and we sat on the cliff near the castle and watched this giant wave collapse over a dark reef. After a while we all started mind-surfing this behemoth, wondering if it was actually rideable.

“We saw the prime spots firing at a size that wasn’t tamed until recently,” recalls Sharp. “At that point in time Mully (Mullaghmore) and G-Spot (a slab around the corner) were objects of wonder and awe, not world-class heavy water.”

Still these monsters smashed over the reef in this desolate part of the world. It had not been surfed back then, and it had been deemed impossible to ride. It was too big, too gnarly, too fast and too sectiony.

“Mullaghmore’s flawless six times overhead tubes from hell just left us all wondering ‘can that be ridden?’” remembers Sharp. ”Turns out it can if you’re prepared to get the flogging of your life and/or break a femur.”

Little did we know back then that the wave we were watching, Mullaghmore, would become one of the greatest big wave spots in Europe and the world. 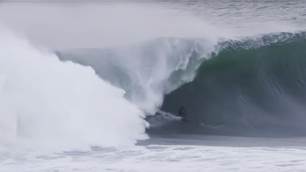 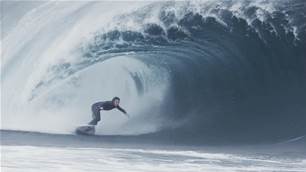 Watch: Luke Hynd Sending It at a Number of Irish Slabs 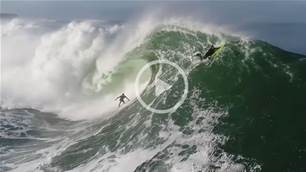 Meet the Pioneers of Irish Surfing