“Just put on a rashie and help out these kids.”

Not all heroes wear capes. Some wear fluoro rashies and ride 11 foot soft tops with ecstatic children glued to the front of them. Three mates from Perth, Luke Hallam, Sam Moyle, and Tom Johnstone, founded the not-for-profit organisation, Ocean Heroes, with the aim of travelling around the country giving as many free surf lessons to kids with autism as their limited resources would allow for.

For children with autism, and the parents that care for them, the most rudimentary challenges can prove disorientating and excruciating. A neurodevelopmental disability that severely comprises intellectual development, quality of life, inter-personal relationships, and mental health, the prevalence of autism has increased 50 fold over the past 30 years, with an estimated 48,000 children living with the condition in Australia today.

While the data is yet to trickle in, anecdotally the results of the Ocean Heroes program have been off the richter. “The most amazing experience that my water loving boys have EVER had. Today they had the best time ever…the smiles, the laughs, the fun. Thank you so much to all the volunteers, surfers and organisers. This is an awesome charity and you shouldn’t have to wait too long for a sponsor,” wrote Karen Efferille, a mother of boys with autism, of the experience on their Facebook page.

We spoke to co-founder, Sam Moyle, about the emotional journey so far and why he needs you, the public, to step up and help out.

What happens when you take kids with autism surfing?

It’s good fun. Once you catch the bug of taking kids surfing it makes all the other surf worthwhile. Turns shitty two foot slop into waves of the day.

How did you get involved in this Sam?

A mate of mine, Luke, who is a personal trainer, also trains kids with autism. He was speaking with the families of the kids he trains and he realised a lot of these kids don’t experience the surf. One of the highest rates of death for kids with autism is drowning so a lot of these parents are afraid to take their kids anywhere near the ocean.

We got together with another mate of ours, Bomber, who is a surf school bloke down here at Scarborough and we started Ocean Heroes.

Between the months of September and April we run free events here in Perth and take upwards of 150 kids a day surfing with autism. We’ve taken it around Western Australia and to Bondi as well and we’ve got an event coming up in Torquay next month (February 2nd). There’s scope for it to go everywhere. It brings a lot of the surf crew together and it puts away whether you’re a Grade-A kook or Kelly Slater. You just put on a rashie and help out these kids. 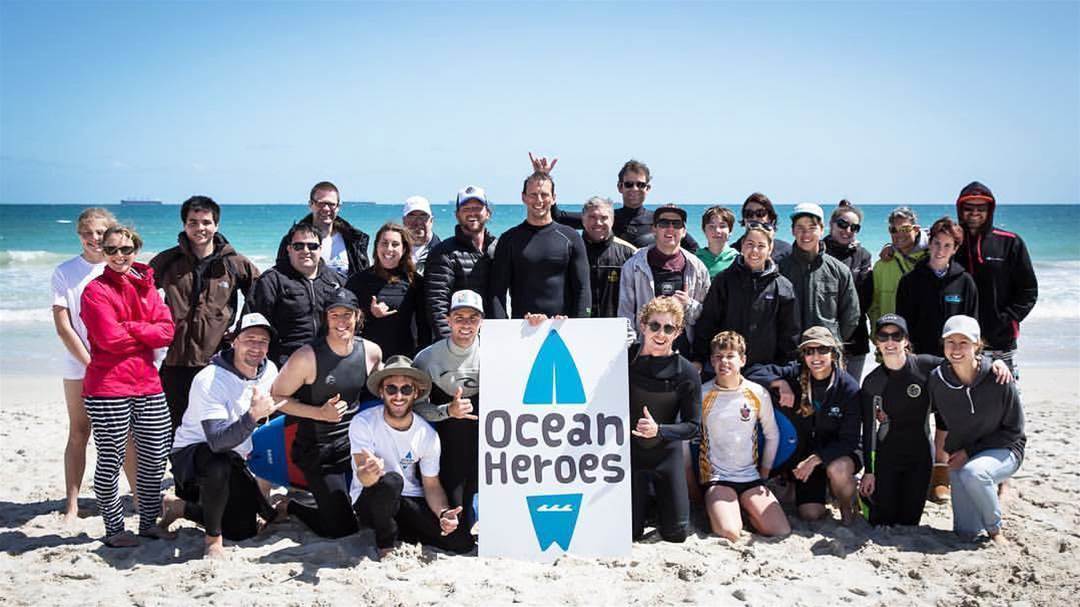 A big team of straight up legends!

How rare is that in surfing?

We’re so selfish. We’ll burn all our mates just to get the best wave. When you turn around and take it away from your benefit to someone else’s benefit and helping them it just puts everyone in the best mood. And the parents love to watch the kids in the surf watching them do something that they wouldn’t normally do. We’ve got these massive ten 11 foot boards and paddle into little rollers or catch white wash and get these kids on the front with life jackets or a wet suit and they have a ball. It’s so much fun.

Highlights of the journey so far?

Seeing people open up in the autism community and build that trust around you. It’s a tight knit community and once you do gain that trust you’ve earned your stripes, they can’t say a bad word about you.

How much fun are the kids to work with?

They’re great and we get a wide range of kids on the spectrum and all ages as well - as young as two or three in the life jacket and we’ve had parents that have autism as well.

Some kids are non-verbal and won’t say a word, they’ll just make noises and you can tell they’re excited or having a good time by their facial expressions.

Or we’ve had kids that are completely vision impaired and we’ll get them out in the water. You don’t know what it’s like to not be able to see so you’ll say something like the water is so clear or the sky is so blue but they don’t know what water is and they don’t know what the colour blue is but they still get the rush, that feeling of being picked up by the wave and surged forward. The bubbles are a really big thing for kids with autism as well. It’s sensory overload but at the same time a lot of them love to stick their head underwater and have absolute silence. They love it under there. Every kid is different and it really makes you as a volunteer appreciate what we have and what we’re able to do.

What are the therapeutic benefits?

We’re currently trying to do some solid research on it and look at some other organisations around the world and what they’re doing using surf as a therapy. People with PTSD (Post Traumatic Stress Disorder), mental health or depression or physical disabilities - there are all these different groups - and we’re just a piece of the puzzle.

We see the kids come to the beach so nervous and anxious and hopped up and scared and very timid and apprehensive and you get them out in the surf - we still have a couple that don’t enjoy it - but most of these kids open up and light up. As soon as you catch one into the shore they jump up on the sand and run around and hug their parents and then run straight up to you and say, ‘Another one, another one.’ Some of them end up in tears when they come in because they don’t want to come in. They are a completely different person from when they enter the water to when they exit.

Why do you think that is?

I dunno whether it’s the salt water or the energy or the waves crashing or getting smoked by a wave. There’s been some serious wipeouts. Some kids come up screaming and some kids come up laughing.

The ocean seems to have a bit of a calming and relaxing sense to these kids. Whether it is experiencing something new like that for the first time or just being in an unpredictable environment. Everyone seems to get it from the ocean so being able to share that with the kids is just a really cool thing.

What do you need from us - the public - to keep this going?

We’re a not-for-profit and we don’t charge at our events and we want to keep it that way. There are a lot of families out there who are financially not in the best position and we want to make it accessible for everyone.

Our goal is to run these events more often and in more locations around Australia. As long as people get around us and volunteer at events, and help out on the beach - whether that be getting kids into life jackets and wetsuits or in the water jumping up on the boards with them - it’s just about bringing that community together and getting as many people to help out as possible and spreading that word. Because it is such an easy thing for us to do, to go down the beach for an hour and jump on a board for an hour, but for these kids its a once-a-month really cool thing they look forward to and it’s a game changer for them.

What are your plans for the future?

Ideally to get some major sponsors on board that want to back us and see us progress and become a bit of a long term thing. We need sponsors and we need donors and we need support on the ground with your hands so the more the merrier. We’re just so thankful for all the crew that come down to our events time and time again.

*Sam, who works full-time as a marine biologist, asked for would be volunteers or donors to reach out to Ocean Heroes via their - Instagram - Facebook or - website.