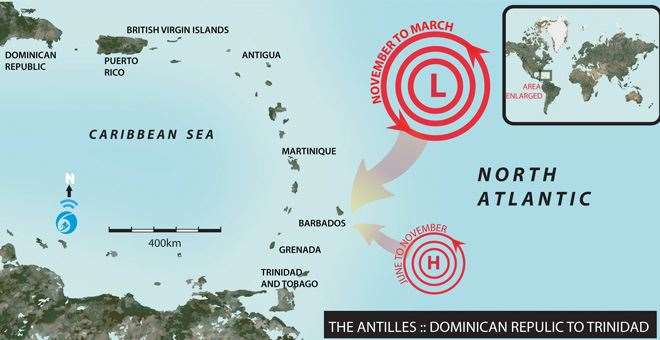 ....Ah the Caribbean, she is a harsh and fickle mistress and Rip Curl and the ASP are going to get a taste of her lash this year. October 30 - November 10 is the official contest period fir The Search world tour event and in my opinion a great window to call - the best shot at seeing the region on fire. We will be at the tail of the hurricane season, which will hopefully mean the chance of some late season distant juice as opposed to the contest site being overblown and obliterated by a full FORCE 5 in August. November is also the start of the north east swell train season that brings down significant (albeit attenuated) energy south via the Atlantic Corridor.

The big question is where in the Caribbean? Whilst we will have to wait until Bells to find out officially (early April), I think we can make some early calls.

First up, this whole thing (like any event) could go pear shaped. Poor Mundaka was so bad last year that she has been stripped of her ASP location status. Funny that the east coast river mouth / open sewer line-up at Santa Catarina Brazil keeps getting away with crap conditions and even worse webcast though? Still, while the estimated 30 million Brazilian surfers in the country are going through 30 million boardshorts every year, don't expect it to change anytime soon. West coast Atlantic is notorious for being either flood or famine as far as swell - just ask anyone who has ever surfed New Jersey.

Okay. We are talking Caribbean here but I can't see the event actually being held at a location in the Caribbean proper. Places like Salsa Brava on the Caribbean coast of Costa Rica do get surf but it is totally hurricane dependent. For the same reasons you can scratch Jamaica the entire Central American coast and The Dominican Republic - bikini shoot yes...ASP Event...mehhh.

So now we are left with the Antilles, which include the sweep from Puerto Rico south to Trinidad. Puerto Rico is a definite possibility. Excellent infrastructure and even better waves. It is a larger Island with plenty of backup venues that work on a variety of swell and wind direction combos. There should be plenty of opportunity for boardshort themed ads with a West side Story angle to them as well.

Just to the east lies the British Virgin Islands, could you image what a venue that would make if Richard Branson surfed? If some of those millions were devoted into surf related pursuits as opposed to finding ways to send 80 year old Russian Oilmen with bowel cancer into space just imagine where and what we would be surfing today? Anyway, the islands just aren’t big enough to offer back up venues that don’t involve carting the whole event across the ocean to another country so it won’t happen here. Same goes for all the way down the chain until we come to an island called Barbados. Barbados has a particular wave called Soup Bowls - an achingly beautiful right hand reef set up and regular contest venue for the CSN (Caribbean Surf Network). A few stills below courtesy of the CSN of the break:

So, I'm tipping Soup Bowls, Barbados. Thinking it could be someplace else? Drop a comment below.

Plenty of vids of surfing in Barbados to embed here is you need them: http://www.surfingatlas.com/video/spot/44

Have a Great Weekend guys