A tongue in cheek tribute to our great grassroots surfing hubs – the humble boardriders club.

Back in the 90s the Sandy Knob Boardriders were a club whose reputation far preceded them. Passionate, hard-partying and never far from controversy, their antics at boardriders battles and interclub contests were the stuff of legend. Unfortunately, that all came to an end when they were sued by a rival club. In an instant one of the most infamous organisations in Australian surfing was gone, seemingly forever. So imagine our stoke when we received the following newsletter, the first correspondence from the club in more than two decades. It appears the Sandy Knob Boardriders are up and running again, and like any good comeback story, we’re more than happy to support their journey.

Well, the Christian Surfers’ legal team said it’d never happen, but the legendary Sandy Knob Boardriders roared back to life on the weekend with our first contest in twenty years. What a feat! The waves were rubbish and the clubbies kicked up a stink, but it’ll take more than that to stop us. Of course things have changed a bit since ’99 and we’ll be promoting ourselves as a family-friendly club this time around, but that doesn’t mean we won’t have some fun. By the way, has anyone found my sunnies? Reckon I lost them sometime between the second bottle-o rum and Ralphy’s step-daughter’s 21st, but not too sure.

There was always going to be a few teething problems at our first contest in twenty years so sorry about the balls-up with the start time. Things were meant to kick off at 7am but what happened was Woz said he’d dug up the club’s old rashies but when he rocked up at mine what he thought was the box of old rashies turned out to be a box of his dead mother-in-law’s lingerie. Anyway, big shout out to the lady up the road whose kids are into The Wiggles - what a lifesaver!

An old rivalry was reignited when Daffy and Shaneo drew each other in the second heat. After some tense words on the beach the pair paddled each other around the shark buoy in a bid for priority. Considering the thing was about 700m offshore and they’re both built like fridges, they were rooted by the time they got in and were beaten by a couple of grommets. Still, the fact they had to be separated by Ed and Uncle at the showers afterwards proved they’ve still got plenty of go in them.

Just a friendly reminder that anyone who tries to weasel their way out of judging duties will have terrible things said about them behind their back.

Despite some protests from the older guard, we will be scoring airs. Leash-pulling, head-dunking and waxing your opponent’s board with soap will generally be frowned upon, but let it be said grommets, no one likes a whinger.

Young Rory Drinkwater took out the final but copped a bit of flack in the process. Big Doug said he should’ve been disqualified for claiming he enjoyed the wave pool contest. Byrnesy said he didn’t like his hair. Gillard reckoned anyone with a name like that must’ve come from a long line of lycra enthusiasts but in the end it was a pretty one-sided affair. Fellow youngsters Toby Ryan and Danny Lang also made the final, as did ’97 club champ Dinger Turnbull, who turned back the clock with an impressive display of durry-munching and questionable sportsmanship. Congratulations to all.

Next contest will be the third Saturday of next month. See you all there.

PS - Anyone got access to a photocopier and can run off a year’s supply of score sheets? For free?

PPS - Turns out my sunnies were in the fridge. 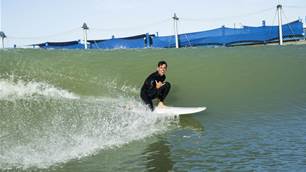