Surf fiction with a twist in the back

The cloud lifted, the rain drifted, the wind shifted.

It had been blowing from the wrong point of the compass, i.e. the north, for weeks on end, and our surf break had been blown to the shithouse. Our water faces open to the north, and when the howling raging northerlies strike up the erstwhile, perfect straight lines of rolling green surf get transformed into lambchops and peasoup. Still green, but as useless as a chocolate teapot.

With the long-awaited shift in the wind we bolted and struck out onto the water, determined, deprived, depraved and deranged, with withdrawal symptoms ratcheted up to 11 out of 10. Anything would do after being so dry for so long that even the webbing between our toes was starting to crack, flake and die off, and so we got out amongst the post-northerly post-mortem to get wet.

I grabbed a wave and rode it out along its bumpy, uneven trajectory for the characteristic short run associated with these conditions, moving with the unusual twists and jerks of the stirred-up water, and when it petered out before really going anywhere fast, I dropped down on my board as quickly and nimbly as an arthritic orangutan with a wooden leg. As soon as I landed I looked over my shoulder to see if there was anything rideable right behind me that I might be able to jump on to for a follow-up.

As it turned out there was. Unfortunately, it was also currently occupied by a board being ridden by Shawn Of The Dead, a bloke we know who is renowned far and wide for lurching to and fro on his board like a zombie, with his hands held out in front of him and a stare tuned to infinity on his face. He also, apparently, according to unfounded malicious but intensely enjoyable rumour, eats human brains. At the exact same time I looked over my shoulder he stumbled to his feet and bore down on me like a stealth bomber with a lingering uneasy recollection of Enola Gay, Nagasaki and Hiroshima. I froze, checked to see if he was going to swerve to avoid obliterating me, and when the panic-stricken look on his face told me that he wasn't in any position to aim anywhere but right between my eyes, at the last possible moment I threw myself sideways in desperation, and the 9' 6'' longboard hit me full in the arse.

We emerged spitting out seaweed and plankton, Shawn Of The Dead apologising profusely in great embarrassment, and we laughed it off. These things happen. We went on our merry ways and forgot about it, but, after a debrief of the incident with The Crew, it was suggested that perhaps Shawn Of The Dead could be more accurately identified as The Bulldozer.

Half an hour later, not long before Closing Time, with hordes of zealous hungry holidaymakers streaming down the beach, keen as mustard for a bit of that chopped-up, five-second-go-nowhere northerly action, I eyed off a wavelet ambling my way, and spun around briskly and enthusiastically to jump on it like an elephant onto a grasshopper.

And put my back out.

This had never happened before in the surf.

My back has had the periodic inclination to fold itself five-ways in the wrong direction for many years, since an unfortunate accident involving catching, branding, dehorning and castrating cattle in my state of origin the Northern Territory, when I was a stockman. I had picked myself up from the dust and shrugged it off in the knowledge that, at a stretch, it could well have been me who had ended up castrated instead of the bull. So I had patched up my various vertebrae and discs with gaffa tape, a shifter and tie-wire, and left it at that. It had never bothered me in the surf until now.

Faced with the necessity of getting fixed up I dragged myself off to see a back-crack-quack to put things right. Now these people are the pinnacle of scientific achievement, the masters of medicine, the gurus of genuflection, the wizards of wonderworking, and their praises can't be sung highly enough. Where would we be without them, I ask you.

'Goodday Valued Customer. How may I relieve you of your money today.'

'My back's crook. I had a longboard shoved up my arse and now I'm shitting sideways.'

'No worries. Lie down here on this bed of nails and broken glass.'

I laid down, taking great care to cut and lacerate myself in as many different, inconvenient and embarrassing places as possible.

'Very good, very good', he said, stroking his beard like it was his pet ferret that had just returned home after a long and perilous journey to the International Conference of Rare And Unusual Gastronomical Delights Involving Small Furry And Inedible Creatures. 'Now, what colour was it?'

'Er ... it was brown, Dr Quack Your Honour Sir', I replied truthfully, in awe of the breadth and depth of his knowledge, experience and expertise.

'Excellent, yes, I thought as much', he murmurred. 'Can you tell me, and this is of vital importance, you understand, the shape of the dregs down the bottom when you finished, did they resemble more a dolphin, a whale or a bonobo's arse? Think carefully about this, take your time on this one.'

'Excellent, excellent!', he exclaimed. 'Just what I suspected! That confirms the diagnosis!' He rolled his shoulders back a few times, cracked his knuckles ominously and rolled up his sleeves. 'Right, now, can you see my left hand over here?' He held up his left hand near my left eye, at the periphery of my vision, and wiggled it up and down a bit.

'All right now, keep your eyes fixed on my left hand, and whatever you do, do NOT under any circumstances take your eyes off it, you understand?' he demanded.

And, while wiggling his left hand near my left eye, his right hand grabbed a 10 kilo sledgehammer that was lying on a table by the side, swung it wildly and erratically through the air like he was about to rope a feral old buffalo that's been bush for ten years and is not going to listen to any human trying to tell it what to do, and brought it down on my lower back with a blow that registered 7.8 on the scale of Richter, as measured across the other side of the Pacific Ocean three days later.

I dragged myself out of there on my hands and knees, bleeding profusely from a multitude of minor and major cuts and grazes, leaving a trail of blood and glass shards all the way across the carpark, ecstatic with the first class medical treatment I had just received. As I skidded and fishtailed out of the exit three cars behind me drove across the trail and got four punctures each.

Three days later I was back in the surf.

I shared the tale of my woes, worries and tribulations with The Crew, who shook their heads in wonder and appreciation. We agreed that medicine is a manifold blessing for humanity indeed.

Feeling a bit nervous before my first wave, I checked to make sure The Bulldozer wasn't anywhere near Cooee from me this time. Sure enough I spied him on the other side of the bay, running over pregnant women and frightening small children. Considering the coast clear and everything safe, I took off on a wave, enjoying the freedom of the salt water after having been suspended upside down from the rafters of our house for the last 72 hours to finalise a last few twitches to my back treatment, as per doctor's orders. I drew a deep breath of fresh briny air as I whirled along the wall of the wave, savouring the joy of moving in synch with the water and the world, in balance, peace and harmony with all living creatures great and small. The wave ended, inevitably, and I fell gracefully backwards in the water with my arms and legs pointing in five different directions.

Elated, stoked and over the moon I stuck my head out of the water, shook the water out of my eyes, and opened my mouth to shout my joy and happiness to the world in general.

And looked straight down the barrel of the longboard of my mate Chief Switchfoot, ambidextrous stance-changer, aquatic acrobat and murderous lunatic, bearing down on me a hundred miles an hour, no more than two metres in front of me, an evil bloodthirsty grin on his face and smoke coming out of his ears.

My life flashed before my eyes, first forwards then in reverse. It wasn't any less short, boring and uneventful in reverse.

So I let go of my board, took a deep breath and duckdived straight to the bottom, burying my head deeply and firmly in the sand while The Chief, roaring furiously at being deprived of the opportunity to decapitate me, flew inches overhead and disappeared into the wild.

I held my breath, stayed down with my head in the sand until the sun went down, then cautiously extracted myself and returned to dry land. I wasn't gonna take any chances. 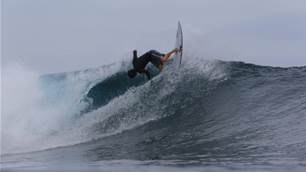 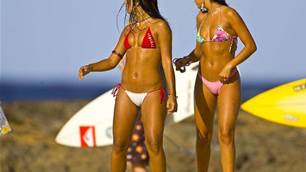