So there we were, barreling up the highway, out-running the law, loudly assessing the Ultimate Surf Playlist. 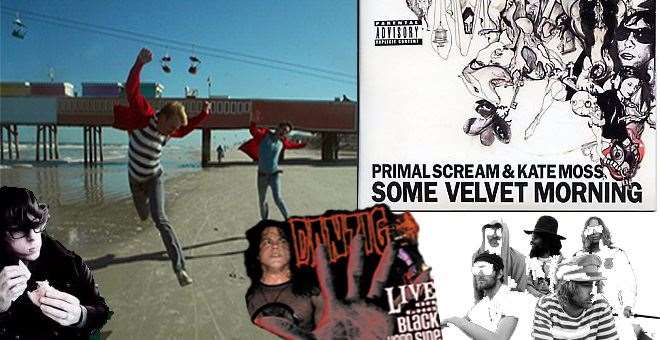 So there we were, barreling up the highway, out-running the law, loudly assessing the Ultimate Surf Playlist. We had just taken a heady detour through the rock classics to satisfy the elderly and infirm. Hendrix, Marley, Cash and Morrison have all been accounted for. Now we must change gears and brave the, mashed up, irony-riddled 21st century. Queue Skullcandy headphones, illegal downloads, fruity 80’s synth pop and pseudo techno.

Primal Scream – Some Velvet Morning. I wasn’t convinced techno and surfing worked together until I watched Modern Collective. This track lifts the French segment in Kai Neville’s masterpiece and makes you feel like you’re being driven home from a Hossegor nightclub directly to a sun-kissed Atlantic to wash the funk from your groin. Oui, s’il vous plait.

The Drums – Let’s Go Surfing. Little more than a whistle, a bass line and a chorus, but catchy as herpes. Just a real simple song about going surfing by a bunch of sophisticated New York lads who don’t.  The band members used to dabble in electro-pop but took to the guitars when they discovered English post-punk (The Smiths, Joy Division, The Wake).

The Black Keys – Strange Desire. Great band. Great song. Compliments the surfing and motorbike riding of Rob Machado in the wilds of Indonesia in last year’s excellent profile/travel documentary, The Drifter. One guitar, a couple of drums and some vocal cords is all you need. Wailing.

Goons of Doom - Caught By The Fuzz. There’s been a rash of surfer/muso cross overs in modern times. Kelly Slater, Rob Machado, Jack Johnson, Tom Curren, Beau Young, Donavon Frankenreieter, Perry Farrell, and Xavier Rudd all spring to mind. Enough for a small festival. Were there such a thing the Goons of Doom would be perfect for the coveted 9pm slot (after Jack, before Janes). This one’s a Supergrass cover that sounds like it was recorded in your neighbour’s garage. Surf car trivia: it featured in a surf vid but which one?  (A: Doped Youth).

Danzig – Long Way Back From Hell. Does anyone howl like Glen Danzig? This is old school devil rock but it’s long been a favourite of surfers with pet snakes and ouigi boards. It sneaks into the modern five because Hawaiian wunderkind John John Florence revamped it to spectacular effect in his Innersection clip only weeks ago.

Five songs to go. The final installment will list the top five ampingest songs of all time in ascending order of ampingness. The number one song will make your head explode just by reading its title on your screen or I’ve completely fucked this up.